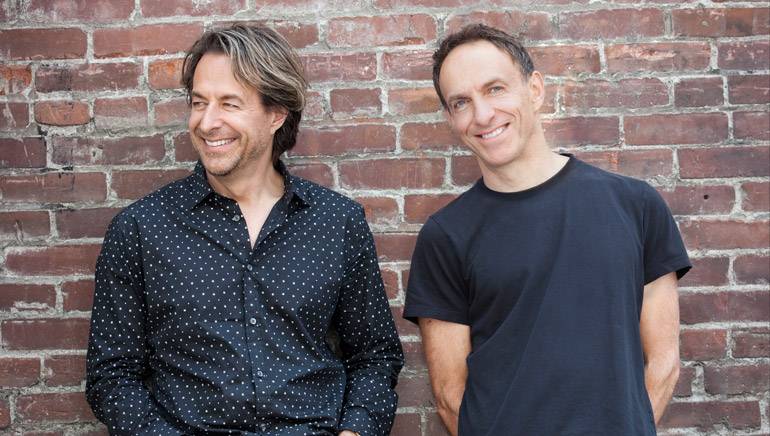 The masterminds behind the music of the FX hit television show Tyrant, brothers Mychael and Jeff Danna drew inspiration from its Middle Eastern locale, using Arabic instruments such as the santoor, ney, kanun, oud and kamaan, in sync with an impressive 44-piece orchestra, to set the scene of an American family lured into the drama of a turbulent Middle Eastern metropolis. This exciting project, rife with culture clash and sibling rivalry, is hardly their first collaboration. An Emmy nomination for Outstanding Main Title Theme Music for Camelot, as well as more than 10 feature films, numerous television shows and projects with directors such as Terry Gilliam and Neil LaBute are the results of their creative work together.

Individually, the brothers can also take credit for many outstanding accomplishments. Jeff, whose career began as a pianist/guitarist before he transitioned to soundtrack composing, headed to LA in 1991 and became one of the top composers of television soundtracks, writing the scores of hundreds of episodes. Since 2000, he has focused on film composition, with scores to The Kid Stays in the Picture, The Imaginarium of Dr. Parnassus, Resident Evil: Apocalypse, and the cult classic The Boondock Saints, as well as its sequel. His most recent projects include the scores for Montage of Heck, the groundbreaking biopic about tragic music legend Kurt Cobain, and Anesthesia, which stars Kristen Stewart and premiered at the Tribeca Film Festival in April. Mychael’s work on 2013’s Life of Pi won him both the Academy Award and the Golden Globe, while his collaborations with Bennett Miller include music for hit films such as Moneyball and Capote. Last year, Mychael was the recipient of BMI’s prestigious Richard Kirk Award. With their work going on for season two of Tyrant (premiere June 16th), the brothers took time to connect with BMI about scoring this dynamic show and their collaboration.

What was your favorite part about scoring Tyrant?
Mychael Danna: The richness of the show and how we reflect that in the score. It’s an exciting schedule, no doubt. Every week we record with a 44-piece orchestra – a santoor, kamaan, ney and kanun. Somehow, every week we get it done… so far! I love the fast turnaround and high intensity of the project. It forces the creative ideas to flow and helps you as a writer trust your heart and not overthink.

Jeff Danna: I love the fact that we get to do a ‘classic sandal- flick’ score for Tyrant. When we were growing up my favorite movie was Ben-Hur, and I get such a kick out of writing and recording cues that are in that vein. Howard Gordon and Glenn Caron are energetic and inspiring collaborators. It’s a rewarding experience for us.

Are there any characters on this show that affect the score in particular? Who, why?
MD: The two central characters in Tyrant, brothers Barry and Jamal, are very different people who have a combative relationship, and yet are bonded with a strong love and admiration for each other. While Jeff and my relationship probably never quite gets this extreme, we can relate to their dynamic, and I think it has really helped inform our approach to this work.

JD: It does seem to be about Jamal and Barry, and a musical East meets West kind of cocktail. The ideas in Tyrant about families and brothers have a strong and sometimes eerie resonance for me. I think that in many situations two brothers can make for one very strong unit, as each one’s strengths and weaknesses are blended. As it was in season 1 for Jamal and Barry onscreen, so it was for us in the music room.

Neither of us has driven a Ferrari off a cliff yet, but there’s still time I suppose.

Tell us about working with your brother. How do you collaborate?
MD: Much like the brothers in Tyrant, there is a bond and a sense of competition, which lifts the quality of our work consistently. Every day is handled differently; some days we are writing together in the same room, sometimes in our separate studios, sometimes one starts a melody and the other finishes, or one writes and the other critiques. We make it up as we go along, but it seems to be pretty smooth. We’ve been working together a long time, and have slightly different skill sets and strengths, and ultimately deeply trust the other guy’s taste and opinions.

JD: I would say we don’t really think about it until someone asks us. It just seems to be (mostly!) effortless. If I’ve done something that he thinks can be better, I don’t question it very often, I trust that there is a better option there somewhere, and I go on to the next idea. And vice versa.

I have 3 sons of my own, and Mychael and I are the same age-difference as my oldest and youngest sons, who get along pretty easily. My middle and youngest sons are only 18 months apart, and the rivalry there seems to be ever-present, perhaps because they are always at the same life stage together.  I think that the age-gap, which is numerically meaningless in middle-age, still factors in for us as well in a positive sense.

What is the creative difference for you between scoring for film and television?
MD: I don’t approach them any differently, it’s all about the story and how music can help tell the story in the most elegant way possible. The schedules are obviously very different, and sometimes it’s different relating to a show runner rather than a director, but really overall the similarities outweigh the differences.

JD: It’s a difference of resources: time and money, but the job is the same. We are storytellers, and collaborators with the director or show runners. The last 3 television shows that I have done I have used an orchestra, so the lines really start to get blurred between the two genres. I like them both:  film has great scope, and this is a great era to write for television. The 10 or 13 hour story lines are a luxury for developing and extending out thematic material.