Posted in MusicWorld on July 21, 2016 by Ellen Mallernee Barnes 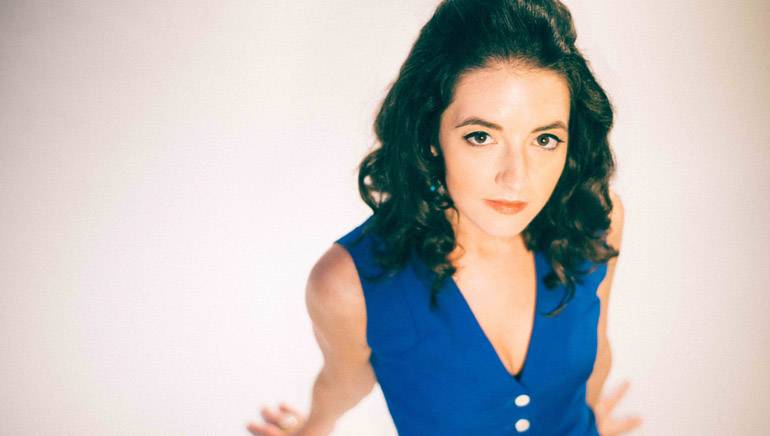 Michaela Anne looks and sounds precisely like a character from “Urban Cowboy”—seemingly having borrowed the tiny frame, unruly curls and body-con western wardrobe of the film’s underdog hero, Sissy. That’s Michaela Anne’s favorite movie—she’s watched it more times than she can count—and she shares with it a heart for the romance-gone-wrong narrative.

Put on Michaela Anne’s third album, Bright Lights and the Fame, and you may expect to hear a needle catch and crackle in some long-dusty grooves. The twang flares up right away and continues to burn, a backdrop to a voice as sweet as it is aching and to songs reminiscent of the work of artists who came decades before. But released just this past May, the album has had no time to collect dust, nor will it. Complimentary reviews from The New York Times and Rolling Stone, comparisons to Emmylou Harris and Linda Ronstadt, and a touring schedule that took Michaela Anne along both the East and West Coast already this summer are keeping the album in rotation on the minds of country music fans who prefer their artists from another time and place, fictional or not.

“It’s funny because I never thought of myself as someone who writes a lot of love songs, which is pretty ridiculous when I really think about it,” says Michaela Anne. “When I listen back to the record, there is a common theme, which is acceptance of whatever heartache you’re having and acknowledging those different experiences and then somehow moving forward.”

As the daughter of a Navy submarine officer, Michaela Anne moved every other year of her childhood, which is why she’s grown into something of an expert on how to move forward, even when the right path isn’t immediately clear. “I’ve always known music was my thing, but I didn’t know in what realm,” she says. “I was in choir, and dance, and orchestra, and musical theater. I went to a jazz conservatory, I sang country songs. I was all over the place. When I was in jazz school and singing jazz, I wasn’t proud of my singing voice, and I realized through this whole process that it was because I wasn’t singing music that felt heart-based and authentic to me. For me, [the key] was to discover artists who didn’t adhere to commercial pressures or genre pressures, artists who just make soul-baring music that’s about the deepest, darkest places of us that maybe we don’t talk about in common conversation.”

One thing Michaela Anne likely doesn’t cover in everyday conversation: what it felt like to have a father who was more often than not out to sea. She says, “My mom tells the story about me being two or three years old, and I would stand at the front window clutching the curtain saying, ‘Daddy, pw-ease come home.’ The older I get I see that that is heartbreaking for a little child, so that really informed the type of music that I found comforting… The first song I ever wrote was a song called ‘When Daddy Comes Home,’ and I feel like that’s the baseline for me, for better or worse.”

In this way, too, music became a refuge for Michaela Anne, a way to, at first, occupy time in a new town where she had no friends, and, eventually, a way to make friends and connections. Two summers ago, she turned to the same time-tested coping mechanism, when after spending a decade in New York, she and her husband moved from Brooklyn to East Nashville in pursuit of a “better quality of life.”

“Life here is so easy and friendly and nice, and the people that I’ve met here have been so welcoming and inclusive,” says Michaela Anne, who teaches voice lessons in Nashville and stresses the importance of treating your voice like an instrument, learning how it works and becoming a better and stronger singer through training. Her approach to songwriting generally begins with vocals, too.

“I start with a guitar in my hand and with what feels good to sing,” says Michaela Anne. “My process is like, ‘This melody feels really good to sing, so I’m going to go with it,’ which I think can sometimes be a detriment, as it’s not always the best word choice just because it feels good to say. This is where it’s important to have self-awareness, go back and edit, and be like, ‘OK, can I say this better? Even though those vowel sounds feel really good to sing, maybe lyrically it’s not the strongest way to say this.’”

To make sure Michaela Anne said what she wanted to say exactly the way she wanted to say it, she spent a year writing and laying the groundwork for Bright Lights and the Fame before recording it with a live band. Her goal with the album was to create an expression of all the different parts of her personality (“I wanted that heartbreaking song, and I wanted party time songs,” she says). To accomplish this, she worked with other songwriters—the first time she had welcomed co-writes on one of her albums—who helped her coax ideas out of her head and into an album that she calls “very intentional” and “well-rounded.”

Now comes the best part for Michaela Anne: playing live. Even though she admits to being a “very nervous person” (a characteristic explored in her song “Worrying Mind”), she has learned over the years how to combat her physical reactions to adrenaline. “Writing a song is so incredible, so satisfying, there’s a high when you finish a song,” she says. “But performing and connecting with an audience and with a band, there’s nothing like that.”

Michaela Anne originally found her way to BMI by way of a friend’s recommendation: “I had always heard that BMI was friendlier to indie and up-and-coming artists. As a musician today you have to be so many things besides a musician, and honestly this [publishing] stuff is so daunting—you’re just like, ‘I just want to write songs, what is all this?’ I joined BMI because it was what friends had recommended, and I get money, so that’s great.”