Posted in MusicWorld on March 1, 2011 by Bruce Britt 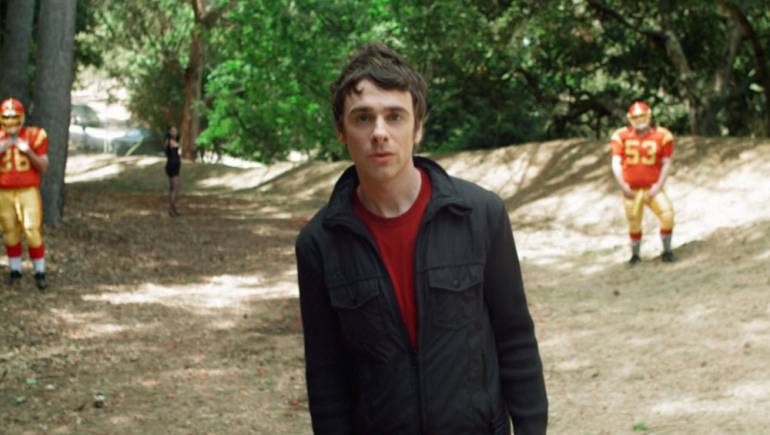 Keep your shirt on. The profile of pop renaissance man Matt Mahaffey is forthcoming, but first kindly indulge us with a round of word association. Here goes: What immediately springs to mind when you hear the words “Expedia.com”?

If you’re like most, you imagine the company’s catchy jingle, featuring a twangy bluegrass quartet crooning the name of the popular online travel site.

As that jingle so gloriously illustrates, Mahaffey is one of the most ubiquitous songwriters you’ve probably never heard of. The memorable Expedia jingle is just one of many mind-muddling musical accomplishments logged by this singer, songwriter, multi-instrumentalist, producer, film composer and sideman. Mahaffey has produced and/or performed with an all-star cast of popular artists including P!nk, Beck, Beyoncé and more. Mahaffey composed the only song expressly commissioned for the original 2001 Shrek movie that launched the lucrative animated film franchise.

Mahaffey’s band SELF—actually a DIY studio project featuring Mahaffey playing most of the instruments himself—is a power-pop group the singer describes as “kind of schizophrenic” along the eclectic lines of Ween and They Might Be Giants. Releasing four solo albums to date, Mahaffey became a sensation years ago when a clip of him performing a one-man-band interpretation of AC/DC’s “Back in Black” went viral. Mahaffey’s cult following is so rabid that two of his fans slapped up an archival Web site cataloging nearly all of Mahaffey’s solo recordings.

Though Mahaffey calls SELF “a huge priority,” his commissioned work has kept him so busy that he rarely gets to perform solo. Mahaffey recently moved from L.A. to Nashville in hopes of rectifying that situation. “There’s nothing I would rather do (than perform solo),” Mahaffey says. “In L.A., I’d literally be doing three things at once. Granted, my résumé is fantastic and I’m extremely grateful for that. But I have a thousand ideas that I’d love to lay down, and I can’t get a word in edgewise to finish anything.”

The Expedia jingle is a bittersweet homage to Mahaffey’s East Tennessee roots. “I grew up in the hills—you know, home of the redneck,” Mahaffey says. “It was also the home of bluegrass, so I grew up playing bluegrass.”

The jingle’s cornpone guitar riff was performed by Mahaffey’s late brother Michael, who died in 2005. “It was terrible,” Matt Mahaffey says of his sibling’s untimely death. “He played in my band for years and we lived together for a long time. I had just landed in London on the Beck tour and my wife called. I had to fly back to Tennessee to do funeral arrangements. It was devastating.”

Now, some six years after his brother’s demise, Mahaffey is working towards reviving his solo career with SELF. “The plan is to build my (recording) facility, finish a record then put a band together,” Mahaffey said. “Then I’ll be playing a lot.”