Posted in MusicWorld on September 14, 2010 by Drew Kennedy 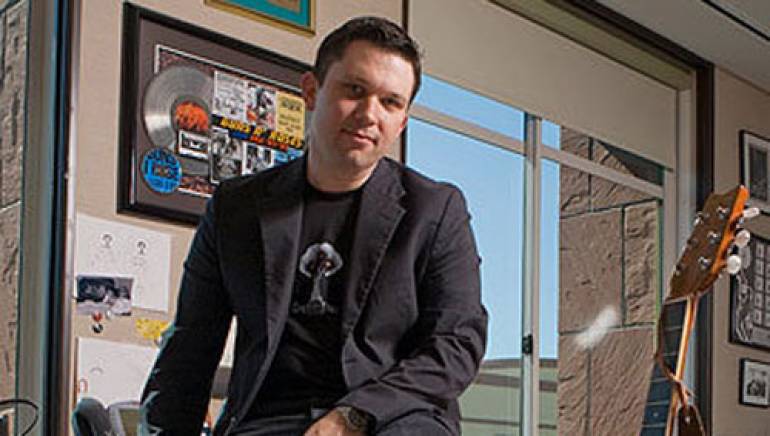 Martin Kierszenbaum started taking piano lessons at age 8. By the time he was 10, he had written his first song. At 16, Kierszenbaum was a member of several bands in Michigan. In order to get their names on marquees, there were club owners who had to be convinced, door deals that needed to be secured, and grass roots publicity campaigns that begged to be organized. Those tasks, more or less by default, fell upon his shoulders.

“It turned out that I was the guy who was pretty good at handling the business of making music,” he says. “So I started representing the bands I was a part of.”

And just like that—with the simple realization that he had a natural knack for business and a natural knack for music—Martin Kierszenbaum had added a “plus one” to the earliest form of his otherwise strictly musical résumé. Now 43 years old and head of A&R for Interscope, he is also president of his own imprint, Cherrytree Records.

Kierszenbaum’s made more than good on his business savvy: He has played a large part in the careers of Lady Gaga, Sting, Feist, Keane, and a host of other chart-topping acts. However, unlike many of his counterparts, he has managed to continue in the vein that first piqued his interest in music: the creation of it.

The dual role that he has developed—that of shepherd of the performing arts as well as contributor to it—is one that was carefully created over time.

“I have a position where I’m at a label, and it’s my job to find artists, to develop them, and to help them realize their goals. Because of this, I have to err on the side of not imposing myself on them,” he says. “Musically, I basically wait until I am asked. What has happened over the years has been organic. I’m fortunate.”

In fact, Kierszenbaum has contributed to some of the biggest pop hits in recent memory, co-writing chart-topping titles like Lady Gaga’s “Eh Eh (Nothing Else I Can Say),” as well as t.a.T.u’s “All the Things She Said.” The attentiveness to creative nuances that he learned as a young writer has helped Kierszenbaum quickly rise through the ranks of the often-rocky A&R world, and likewise, his innate understanding of business has helped him cultivate his creative contributions.

With careers made and lost on songwriting selections, the role of a writer is a demanding job on its own. In Kierszenbaum’s world, those demands intermingle with the pressures created by the business of music. It’s a balancing act. With ease and poise, he lives in both spheres, stressing that a regimented approach is the best recipe for both aural and commercial success.

“It’s a real ritual—like taking off a hat and putting on another one,” Kierszenbaum says. “The studio is a business-free zone. I make sure we bring nothing but the artistic side of music into the studio. It’s like Mister Rodgers, when he’d come home and put on his sweater and sneakers. I put on my writing sneakers when it’s time to write, and I leave everything else outside of the door.”

The evolution of Martin Kierszenbaum continues, just as he continues to help the next generation of creative geniuses reach their own pinnacles of success. He remains expertly perched on top of his musically-charged fence. Unlike the moral of most such analogies, however, he could easily fall to one side or the other and remain completely successful. It’s unlikely that should happen, of course. Martin Kierszenbaum has made his mark with an artistic sensibility that continually complements his business acumen. And vice versa.

“Writing isn’t a hobby by any means,” Kierszenbaum says. “The first thing I ever did in music was writing songs. I’m the happiest in the world when I’m writing. Songwriting will always be at the core of what I do.”