Posted in MusicWorld on October 8, 2009 by Ernest Barteldes 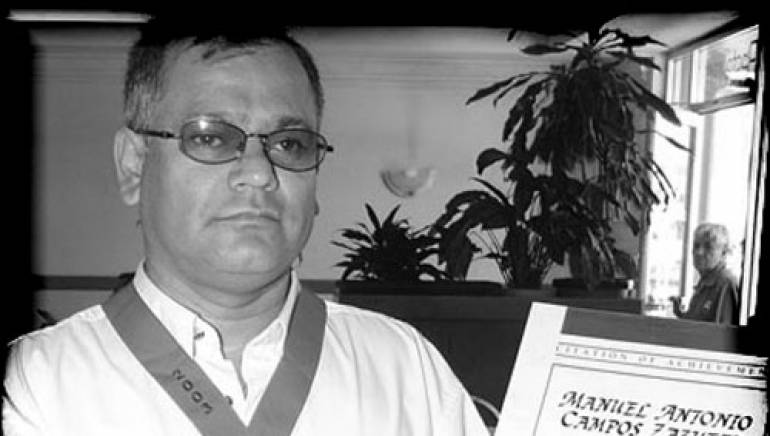 An acclaimed composer and music producer in his native country and throughout Latin America, Mexican-born Latin Grammy-nominated Manuel Campos Zazueta has had more than four hundred songs recorded by a diverse range of performers, including Los Tigres del Norte, Javier Serna and Ramon Ayala, to name a few.

However, what makes him most proud is his composer project Plataforma, a music service that not only distributes his own compositions but also organizes workshops to teach aspiring composers the composition method he developed through his career, which began in the mid-70s as he participated in music festivals in Mexico and abroad. “The professional composition course is based on a methodology that summarizes rules one should follow when writing a song,” he explains over a telephone interview.

Campos suffers from a degenerative disease that has damaged both his hearing and sight since his mid-twenties. Today, he is unable to tune his own guitar, but somehow he knows when the instrument is out of tune. “What happens is that this deficiency developed over the years,” he says. “There is some kind of internal mechanism in my memory that helps me compose today. This partial deafness has made it difficult to identify certain tones, so I cannot tune my guitar because I cannot distinguish between certain notes, but I can tell if the guitar is tuned from its vibration.”

“Because of this disease I have learned to compose by memory,” he says. “Using a pre-tuned guitar I can structure the melody in the way that I have envisioned it – when it comes to singing it or recording, it is not difficult to do so. Once I hear the vibration, I can coordinate it with my voice.”

In addition to the Composition Workshops, he has kept busy with various other recording projects, including his new album No Canto… Digo  (I Don’t Sing, I Say) and another with Mexican diva Manoella Torres, which he is also co-producing.

“I always tell my students that they have to find a theme,” he notes. “The first thing one has to think about is what genre he or she is working with. Once that is established, you should think of how to tell a story in a few words in the clearest way possible.”