Posted in MusicWorld on October 14, 2016 by Abby White 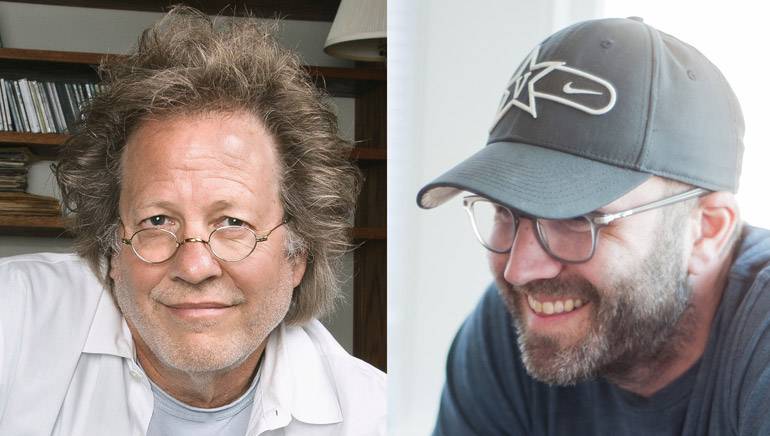 Songwriting, like any art form, is shaped by both nature and nurture.

Hit songwriter and composer Steve Dorff – who has been honored with more than 40 BMI Awards, 11 Billboard #1 songs, and multiple GRAMMY and Emmy nominations – could have viewed his adolescent son Andrew’s interest in writing as simply a hobby, or a child’s desire to follow in his father’s footsteps. Instead, Steve recognized and embraced Andrew’s nascent talent, even encouraging him in the company of his colleagues. For a then 12-year-old Andrew, this certainly laid a foundation of mutual trust and respect that has only grown stronger throughout the years.

Today, Nashville-based Andrew Dorff, who has penned songs for Blake Shelton, Old Dominion, Kenny Chesney and Martina McBride, still counts his father — who lives in L.A. — among his closest confidants, often talking to him several times a day to talk about sports, the music business, or women, among the many things that inspire songwriting.

For Steve, the love of songwriting started with his love of movies. Like Andrew, he showed an early affinity for the craft. “I always loved film music,” Steve says. “Going back to my early childhood, I always musicalized in my head what I was doing — I was kind of scoring my life as it went along. Everything translated into music, which is kind of a tough topic for a lot of people to understand, but I just always heard orchestras in my head. I musicalized everything, whether it was a snowball fight, or a baseball game. It always translated into music.”

For Steve, making the leap into scoring for television and film was something that challenged him in a much different way than writing a three-and-a-half minute song. His ability to leap between mediums led him to score major motion pictures (Steve worked with Hollywood legend Clint Eastwood on five films) and television shows (Growing Pains, Murphy Brown, Murder, She Wrote), in addition to hit songs for Anne Murray, George Strait, Barbra Streisand, Ronnie Milsap, Celine Dion, Kenny Rogers and Whitney Houston.

For Andrew, growing up in a household filled with such songcraft impacted him at an early age. “I grew up pretty shy,” he admits. “Played sports and kept to myself, got good grades, was well-behaved. I remember sitting on the couch at 12 years old, and throwing out some lines, and my dad ended up putting that in Murder, She Wrote, which he was scoring at the time. I kind of started from there … I’d just write. I’d bring some stuff to my dad. I think, just being quiet my whole life, I guess it got into my blood.”

“Early on, Andrew was showing a gift for that signature, that great lyricists that I’ve worked with all have, and Andrew’s got his own little signature,” Steve adds. “Then it just becomes a matter of getting in the right rooms with the right collaborators, and crossing your fingers, and hopefully the magic happens.”

Despite a shared talent for writing, Andrew insists that he and his father approach their craft in distinctive ways. “My father is a lot more music-based — I’m not music based,” he continues. “I’m pretty much 100-percent lyric-based, so we’re kind of opposites in what we do.”

Opposites aside, Steve admits he was thrilled when his young son showed an early interest in songwriting. “It was great because, as a parent, the last thing I wanted to do was force my kids to be a lawyer or a doctor like my parents wanted me to be,” Steve says. “I guess it’s a generational thing, but I just want my kids to be happy in what they do. Andrew showed a great talent with words; he came up with a fresh way of saying the same things that we all write about — I love you, I hate you, I can’t wait to leave you, I can’t wait to be with you — basically, every song ever written is about that.”

Touching on these universal emotions was a lesson in songwriting that Andrew learned early on. In fact, Steve recalls when Andrew first brought him lyrics and asked him to write music so he could give the song to a girl. That song, however, had a much different fate for the young writer, setting his career in motion.

“A lyric I wrote that my dad put music to, Donny Osmond cut it,” Andrew explains. “Long story short, I moved to New York after high school and somehow walked my way into a record deal with Sony. It was kind of crazy. I did Sony for two records, toured in Europe, then I was dropped, signed with Lost Highway/Island/Def Jam, made a record in L.A. that never came out, and that’s when I moved to Nashville full-time.”

When he got to Nashville, Andrew learned that the Dorff name may have gotten him into rooms with other writers, but he still had to pay his dues. “I’ve been working my butt off the entire time,” Andrew says. “The Dorff name totally opened doors, but then I had to prove himself.”

“Every collaboration has its own energy and process, and he had to find that on his own, writing with the right people,” Steve adds. “All of a sudden, something clicks. It was the same in my career; I’d written with so many different great songwriters over the years, but I have those three or four that I’ve had amazing success with, and I think Andrew’s started to find that.”

Aside from the creative part of songwriting, Andrew could also count on his father for insight on the business side. “My dad is pretty brilliant at the whole business side of it all,” Andrew says. “When it comes to contracts and deals and all that stuff, I think that’s where he’s given me the best advice.”

In 2014, Steve launched Latigo Shore Music, a publishing company headquartered in Nashville. As he’s still based in L.A., Andrew serves as a consultant and a conduit for the business, reaching out to other young writers in Nashville. “It would be fun to work together more,” Andrew remarks. “Hopefully we will in the future,” Steve adds.

Like anyone who seeks a career in the music industry, both men were driven by distinct — and eclectic — influences. Steve names Burt Bacharach, Dave Grusin, the Beatles and Beethoven as his biggest influences, along with Jimmy Webb and theater songwriting greats like Jule Styne, Stephen Sondheim and Frank Loesser. Andrew counts Kenny Rogers, Elton John/Bernie Taupin, Michael Bolton, Diane Warren, Babyface, and even opera and beat poetry among his many influences.

“I just love a great song — a melody and a lyric,” Andrew says. “I don’t really care where it came from. More for me, what inspires me more than a certain artist is just living — I wake up every day inspired. I don’t sleep well, probably because I just love life. I write five to eight songs a week, so my inspiration is keeping my eyes open, really.”

As for future projects, Andrew is working on what he calls a “little story” that he feels could be bigger than a song, and he’s excited to explore writing it. Steve recently finished an out-of-town pre-Broadway run of the musical Josephine (The Josephine Baker Story), and he’s working on a stage version of the Pure Country, the 1992 film starring George Strait, which he did the music for, along with the 2010 sequel.

“I don’t write nearly as many songs anymore,” Steve admits. “If I write 15 songs a year now, that’s a pretty busy year for me in terms of writing. I usually write for a specific project. I used to write 50 to 60 songs a year, and that was a huge amount for me, but nothing like what they do these days in Nashville.”

Andrew notes that the songwriting scene in Nashville is competitive, but, as he learned from his father, he always comes to the table ready to write a great song. “I can only do one thing, and that’s write about what I know,” he says. “I’m not going to write about rodeo or living on a farm. I can’t do that because I don’t know that. I just write about love every day in some sort of way, even if love is never mentioned. Love is the underlying theme, I think, of everything in the world.

“What I love about country music is that, when I go on the road, I get to watch people and see what they respond to,” he continues. “I see how they sing along, how they truly love words. That is so interesting. I love watching and knowing, ‘OK — this is who we write for.’ I love country music because people actually listen, and they’re affected by the story, and they care.”

If you press either Dorff for songwriting advice, they’re both eager to offer what they’ve learned. “I usually say two things — write what you know, because anything else is going to sound contrived, and learn how to pick yourself up and dust yourself off about 50 times a day,” Steve says. “That is one thing I learned from my dad,” Andrew adds. “I always heard him saying, ‘pick yourself up, dust yourself off.’ My advice is … well, I don’t really give advice. I never think I’m going to figure it out. I think you just keep trying to figure it out, and that’s what I’m trying to do.”

Both men also know how important it is to have a team you trust around you in this rapidly changing industry. “I joined BMI in 1967,” Steve says. “I feel like, in many ways, they’ve been this incredible extended family for me all these years. I’ve been blessed to be with them.”

For Andrew, BMI has also been like family. “I signed to BMI at 12 years old, and I’m 39, so 27 years ago,” he says. “Recently, my dad happened to be in town, and BMI surprised me and threw me a dinner and gave me four Million-Air awards – four of my songs got a million plays – and my dad was there. That was a really special thing. (Andrew’s BMI Million-Air awards include the smashes: “Somebody’s Heartbreak,” “Neon Light,” “My Eyes” and “Save It For A Rainy Day.”)

I grew up going with my dad to BMI awards all the time,” he continues. “And my dad has been at every awards show I’ve won. It’s awesome — it’s really special. BMI takes care of him and me, and they’re the best. They’ve done so much. People come and go, but I’m a lifer.”