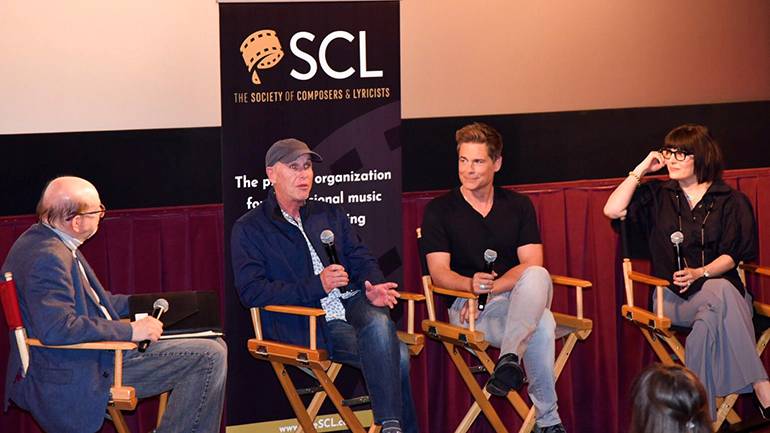 Based on the 1954 novel by William March, the 1954 play, and the 1956 film, A&E Lifetime’s new version of The Bad Seed takes the horror/thriller to new heights with an incredibly compelling score by award-winning composer Leanna Primiani, which perfectly complements the expert direction of Rob Lowe, who also stars. The story follows a widowed father (Lowe) whose daughter’s classmate drowns at school. Though this would be psychological tragedy enough to write edge-of-your seat music to, the plot continues into doubts Lowe has about his screen daughter’s role in the incident and that’s when Primiani’s music takes over the audience’s senses.

As the truth unfolds, the BMI composer’s brilliant 25-piece orchestra (strings, horns and clarinets conducted by Primiani herself) is capped with an out-of-tune piano with this as explanation, “Every little girl plays the piano, but there is something so off about her, that the piano had to be off, too,” she says. Then by adding synthesizers and some electronically processed music, the surrealness of the little girl’s immersion into madness becomes completely inescapable, yet note by note grows increasingly more haunting.

This psychological prodding, however, is nothing new for Primiani whose orchestral “comment piece,” 1001 for Orchestra and Prerecorded Electronics, based on Rimsky Korsakov’s Scheherazade, garnered this review from Dave Beck, Midday Host, Classical KING FM 98.1, Seattle: “Along with her gift for evocative atmospherics, the composer creates thrilling moments of visceral rhythmic drive and energy. 1001 is a piece that kept me on the edge of my seat through every new chapter of this old story—-one that is in desperate need of retelling.”

Needless to say, BMI’s Anne Cecere was completely taken with Primiani’s music to The Bad Seed at the Society of Composers & Lyricist’s recent screening and with the Q&A featuring the composer which followed, and with good reason:. Primiani is in good company having studied with such noted composers and conductors as Leonard Slatkin, Peter Eötvös, Christopher Rouse, and Howard Shore, and has obviously mastered her own unique voice.

Don’t miss the film. The Bad Seed is better than good, it’s great.