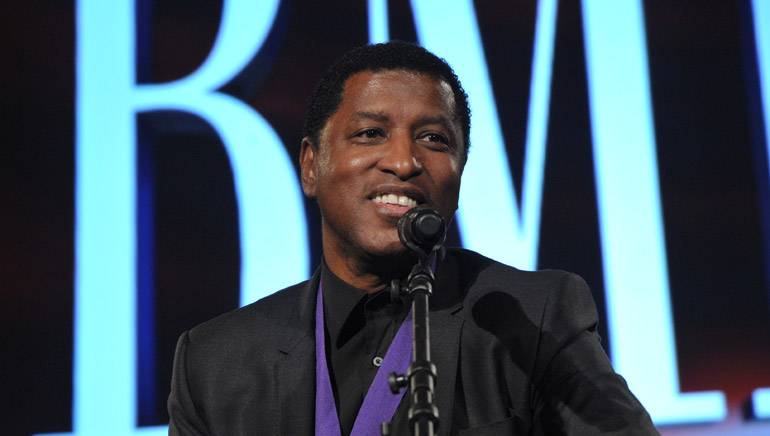 Last night, music legend Kenny “Babyface” Edmonds was honored at the 66th Annual BMI/NAB Dinner during the National Association of Broadcasters (NAB) Convention in Las Vegas. Few creative forces have impacted the contemporary pop/urban genres as much as the 10-time GRAMMY winner.Babyface’s incredible achievements include 11 solo albums, more than 125 Top 10 R&B and Pop hits, 42 #1 R&B hits and 51 Top 10 Pop hits (16 of which were #1’s), which have produced single and albums sales in excess of 500 million units worldwide. Edmonds has also earned 58 BMI Awards, including BMI Songwriter of the Year seven times, and was named a BMI Icon in 2006 for his indelible influence on generations of music makers. As a poignant tunesmith and prolific hit maker/producer, his work has been recorded by Whitney Houston, Boyz II Men, Beyoncé, Mariah Carey, Madonna, Eric Clapton, Mary J. Blige, Michael Jackson, TLC, Toni Braxton, Celine Dion, Anthony Hamilton, Brandy, Aretha Franklin, Fall Out Boy, P!nk, Charlie Wilson and Chrisette Michele, among many others.

Edmonds’ charitable work is as impressive as his professional accomplishments. His caring and generosity have earned him multiple accolades, including the Essence Award for Excellence, the City of Hope Award and Variety Magazine’s “Top of the Town” Honored Award. He has also personally donated more than $100,000 to the VH-1 Save the Music program and continues to contribute to a host of other organizations, including the United Negro College Fund (UNCF). In 2008, Edmonds combined his musical prowess with his charitable efforts, co-writing and producing the song “Just Stand Up” with longtime partner Antonio “L.A.” Reid, which served as the backbone of a multi-purpose breast cancer awareness special. The song featured Beyoncé, Rihanna, Mariah Carey, Mary J. Blige, Leona Lewis, Ciara, Carrie Underwood, Sheryl Crow and Miley Cyrus, and resulted in another honor for Edmonds, this time from the Noble Awards for his contribution to Stand Up to Cancer.

The annual invite-only BMI/NAB Dinner during the NAB Convention brings together the radio and broadcasting industry with the creative community in their shared commitment to great music. This year, other special guests from the BMI family of songwriters included the prolific Claude Kelly, hitmaker Makeba Riddick, actress and songstress Emily Kinney and country legend Randy Owen.