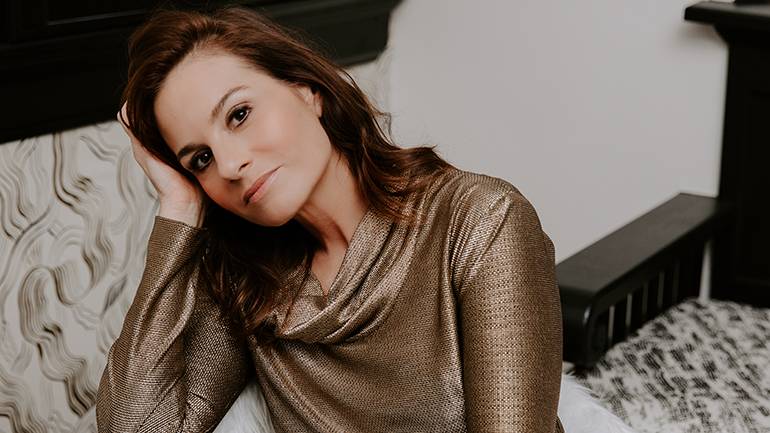 While most of the world met Kara DioGuardi during her stint as a guest judge on “American Idol,” she’s been working in the industry for decades as a songwriter, producer, and performer, collaborating with artists like Miley Cyrus, P!nk, Carrie Underwood, and Jason Derulo. Drawing from her seemingly endless well of creative intuition and her keen sense of navigating the entertainment industry, she started her own publishing company, Arthouse Entertainment, a one-stop music production house that serves all genres and is home to an impressive roster of writers, producers, and artists including Jon Bellion, who won three BMI Pop Awards this year alone for his work with Maroon 5, Halsey, and Illenium, and her protégé, Ingrid Andress.

A natural mentor, DioGuardi loves guiding emerging artists through the early stages of their careers, providing access and connections that young talent often lacks while helping them develop into the best versions of themselves. She’s passionate about truly listening to what young artists have to say and giving them a platform to share their stories through music, bettering themselves and their generation, and has built a nonprofit, Inspired Nation, around this mission.

BMI caught up with DioGuardi to chat about what drives her philanthropic work, why industry leaders should mentor young artists and encourage collaboration with female artists, how she finds the energy to be creative while serving in multiple demanding roles, and what she believes music’s highest purpose is.

As a songwriter, producer, performer, music publisher, author, entrepreneur, A&R executive, and mentor, you wear a lot of hats! How do you find balance between all these roles, and still find energy to be creative?

I’ve definitely switched gears from being a songwriter into a creative publisher, and the way that I get to still have my creativity is by helping mentor young talent. Because I can listen to one of their songs and say, “this is great—what if you do this, or you change this around,” and I’m doing it more on the mentor side instead of being in the room and writing the song. It’s very fulfilling to help somebody reach their full potential. I feel like I had so many years to live in my own truth and be creative in terms of writing songs with artists or by myself. And, for me, I want something more, and my creativity can morph into different areas. I love songwriting, but it’s really been freeing for me to play all types of creative roles.

You’re also a philanthropist, co-founding Inspired Nation, a nonprofit that gives young artists a platform to tell their stories through music, bettering themselves and their generation. Can you share why you felt called to support this cause?

I really feel like youth have so much to say and we really don’t give them a place to speak about what they’re going through, or what their generation is going through. Music is such a great vehicle for them to express what’s going on in their lives. And I also felt that, on [American] Idol, which kind of gave these kids a platform, but after the show was over, that was it, so I wanted to create a nonprofit to give kids a place to tell their stories. They’re using their talent, they’re performing for people, they’re making money for the organization, and we give that money back to their generation. It’s for people who are in need, whether it’s a pediatric cancer hospital, an asthma camp, or a homeless shelter. I’m just a real advocate for youth—I think they have a lot to say and we need to listen to them, and a lot of the times the way they speak is through their music.

Continuing your focus on philanthropy, you also launched the Phoenix Rising Music Program at Phoenix House to support those affected by addiction. Can you share a little about the vision behind the recording studios at Phoenix House locations?

If you’re facing a substance abuse problem, there’s usually an underlying issue going on—issues from the past, difficulty in relationships, or confidence issues. For me, music has always been a place where I could go to download what I was feeling, and it was like the best therapy I didn’t have to pay for. So, the idea was to create this safe place within the Phoenix House rehabilitation centers for kids to go and express what they were feeling, and by getting that out, looking at it as part of their recovery. Music’s highest purpose is a place where creators go to tell their story and tell their truth, and in doing so that affects the listener, because the listener can relate. For me, writing, singing, or performing is really an outlet to express, and sometimes people have trouble expressing, and that’s what leads to some of these disorders and addictions.

From your role as a judge on American Idol to serving as the Herb Alpert Visiting Scholar at Berklee College of Music, where you’ve taught for eight years, you are a natural mentor to budding songwriters and artists. Why do you feel it’s important for industry leaders to mentor young and emerging artists?

I think that it’s really important for industry leaders to mentor up-and-coming artists. We don’t want to tell them that there’s only one way to do it, we want to listen to what they have to say. We want to respect their music and respect their vision, but guide in terms of our past experiences. That’s even more important as we get older as industry executives—what they have to say is going to be different. We have to encourage them to break through boundaries and do things that at times are scary to us because we’ve been in the industry.

We have to usher in the new industry leaders. For example, you could have a really talented person who has no access, so how do we help give them access to the right people—the people that they need? Do we spend the time to listen to what they really need, and what the next step should be, and help pave the way? So, it’s less about trying to tell them who to be and more about getting them to the right people who will allow them to be the best version of themselves.

Did you have any mentors when you started in the music industry and how did they help guide you?

I did—Larry Flick [a former editor at Billboard, where DioGuardi worked as an assistant in the early ‘90s]. He was one of my biggest supporters—he mentored me but didn’t tell me what to do and how to do it, but he knew who to put me in touch with and how to empower me and help me grow.

Well, in the beginning, it was more based around my songwriting, but I always wanted to build a publishing company where the writers could stand alone. It wasn’t that I had to write with all of them; they were great in their own right, and I wanted to help them reach their full potential, which is what made it different. Because, a lot of times, if you’re at a publishing company, you’re usually writing with all your writers as a creative or a songwriter. But for me, what I really wanted to do was leverage my contacts and allow up-and-coming talent to get into the room and work with other artists and songwriters. I love finding talent early and helping get them ready for that moment—I look at it like you’re building a stallion, and when they have their moment, they are unstoppable.

You first met your protégé, Ingrid Andress, while teaching at the Berklee College of Music. Why did she stand out from all the other young songwriters you meet?

She had this incredible way of weaving her truth into songs in a very relatable and authentic way. And I remember specifically meeting her in Nashville a couple years after she had graduated—and this is what I mean about mentorship—but we met at a bar at a Nashville hotel, and she was playing me new music. I realized she was veering off the path that she was on, and I needed to help empower her to get back on it. And that was kind of the mentorship role that I could play in her life, by encouraging her to be that unique artist that she was when she was at Berklee. What happens sometimes when you get out of school is you try to sort of fit into what is already going on in the market instead of just being who you are. Sometimes it’s as simple as being there for someone and saying, “you’re great and you don’t need to change—let the industry catch up to you.”

What advice would you give to a young songwriter starting their musical career?

Always come from a place of truth. Read your lyrics. Are they authentic? Are they believable? Have you said something in a unique way that hasn’t been said before? And the way that you’ll really be able to home in on that is if you’re coming from your truth. Your perspective is your biggest commodity when you’re a songwriter. Don’t get stuck in a surface emotion—go deeper.

Tell us about your recent involvement with “She Is The Music” — the video series “She Is The Conversation,” presented by BMI. Why did you and Ingrid Andress want to be involved with this project?

When you look at the stats of how many women are involved in music, it’s very eye opening. I always find it interesting that in the past, there have been a lot of male producers and male songwriters for all these songs that are sung by women. I think that the best combination for music in the future is more women and men together writing songs, producing and sharing their perspectives. I think the way to bring women into the industry is for those male producers and songwriters to reach out when they see talent, and to encourage more collaboration. I think it has to be done in a collaborative spirit. And this is what I’ve done at Berklee; I’ll put women producers and men producers in the same room and it’s staggering to me how much better the productions are because they come at it from different perspectives, and the combination is really powerful. It can change, but we need the men in our industry to be supportive and move toward collaboration, making sure that the room is represented by all people.

You’ve had a long relationship with BMI, garnering 23 BMI Awards, including Songwriter of the Year. How did you first start working with BMI, and how has it impacted your career over the years?

Jeff Cohen, who is a great songwriter and friend, was the first person to tell me about BMI or a performing rights society, so I signed up with him. And they’ve really been a family for me. Whenever I’ve had an issue or something I needed help with—whether it’s songwriting or legislative reform—they’ve always been there for me. They really care about songwriters and I feel like they’re always fighting the good fight.