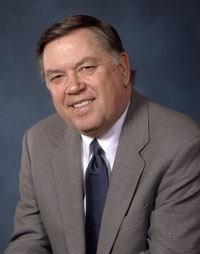 Jack Sander, former Vice Chairman of Belo Corporation in Dallas, Texas, has been elected Chairman of the BMI Board of Directors. Sander succeeds Board Chairman Cecil L. Walker, who will become Presiding Director and continue his service on the BMI board. The announcement came following the annual shareholders meeting in New York.

Sander joined the board in 2002 and was Vice Chairman from 2006-2007. He will hold the position of Chairman for a three-year term. Sander is a 40-year veteran of the media industry and has worked for Belo Corp. since 1997. At Belo, he held the positions of Vice Chairman, President/Media Operations, Executive Vice President/Television Group, Executive Vice President/Media Operations and has served as Senior Advisor since his retirement at the end of 2006. A graduate of the University of Cincinnati, Sander is currently Joint Chairman of the National Association of Broadcasters (NAB). He previously served as Chairman of the Television Association of Broadcasters (TVB), the NBC Affiliate board and Vice Chairman of the Fox affiliate board. In civic affairs, Sander has served on a number of non-profit boards and was the 1995 Chairman of the Board of Directors for the United Way of Metropolitan Atlanta.

George V. Willoughby of Seattle, WA, a board member since 1985, retired from the board.