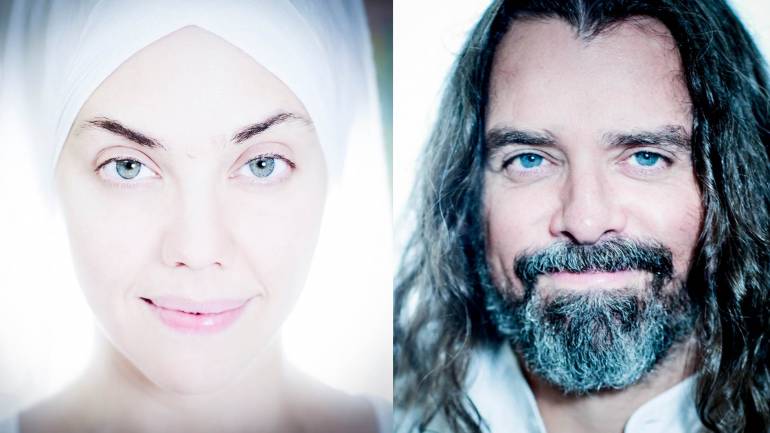 The evocative new age band White Sun’s second album, White Sun II, just went #1 in Billboard after making its debut at #2. Comprised of BMI composers Adam Berry and Gurujas, the duo has made another name for itself far and away from the impressive resumes of each composer. Berry is a two-time Emmy-winning, nine-time Emmy-nominated film and TV composer who has scored more than 500 episodes of television and 15 feature films. His career began in 1997 when he was asked to write a demo for a new Comedy Central show, South Park. His work secured him the job, and his guitar and mandolin music became the signature sound of the hit show. Since then, he’s been working on projects like The Sarah Silverman Program, Disney’s Kim Possible, and Dreamwork/Nickelodeon’s The Penguins of Madagascar. Gurujas is a renowned singer who creates the soothing ethereal mantras that have been the focal point of the two albums they’ve made, the latest of which is part of the University of Southern California’s Health and Wellness program for students. BMI caught up with the pair to ask them about this chart-topping effort and how they got there.

Adam, you are an Emmy-winning composer. How did you come to be a part of White Sun, a band that records mantras in a foreign language?

I love great music. I have my favorites in each genre, but I love David Bowie’s Ziggy Stardust and King Crimson’s Three of a Perfect Pair as much as Afternoon of a Faun. And one of my favorite classes in school was ethnomusicology, listening to the Bulgarian’s women’s choirs, or the antiphonal singing from Africa and Eastern Europe. There’s so much incredible music out there. So when I first heard a song that Gurujas wrote and recorded, it actually ended up on our first album, a track called “Trinity,” I knew there was something really special there. I didn’t know anything about mantra; I just knew it was a good song.

Who writes the music on the album?

Adam: Gurujas comes in the studio with a melody and chord structure and sometimes very clear ideas about orchestration. We do a recording of her playing her harmonium or I’ll lay down a scratch track on keyboard and then Gurujas sings a guide vocal. At that point we start playing with the structure. Sometimes we realize that there should be contrasting material. Other times the song structure is basically in place from the beginning and it’s just a matter of filling it out. It’s a very collaborative process.

Gurujas, what is your musical background?

I grew up in a musical family, my mom played violin in the symphony, and I started on the piano and was singing in the choir when I was really young. Music was always part of my life in some way. But when I discovered the mantras is when everything really started to change. The mantras started singing to me and I started hearing different layered levels of sound. I spent the last 10 years teaching mantra around the world and exploring how the mantra sounds change the perception and awareness of feelings and lead into whole new realms of experience.

Why mantra? Is it religion? It is yoga?

Gurujas: Mantras have a vibratory frequency that doesn’t exist in other kinds of music, so there are all kinds of magical, mystical things that start to happen to people when they listen. Some of these mantras have been in existence for thousands of years, and they were designed to create a better feeling in the human being, to bring a more positive frequency to the planet. It’s not about tradition or religion, it’s about energy. It’s about giving someone a way to feel better, right now, just by listening. And everything we do with the music of White Sun is to further project and expand that positive force of the mantra. Music is a very powerful force. One of the most effective ways to shift someone’s energy is through music.

Adam: Yes, exactly! And I base my entire scoring career on that concept. It’s been shown in numerous experiments that different kinds of music create different psychological AND physiological states in the listener. But this just touches the surface. Music is capable of opening up infinite spaces in the listener.

How did your new album, White Sun II, become part of the required curriculum at USC?

Gurujas: That was really exciting. Yes, two courses at USC have made the White Sun II album part of their curriculum. It’s part of their health and wellness campaign. The university is trying to find new ways to deal with student stress, which is off the charts. One of the teachers there is teaching two yoga and meditation classes and requires her students to download the album and listen to it as much as possible. She told us that the music of White Sun II is able to shift the energy of a room full of students in a way she hasn’t seen in 10 years of teaching. Her classes have been so popular that the dean asked her to add a third one next year.

White Sun II is now #1 on Billboard’s New Age chart. What does that mean to you?

Adam: It’s amazing, it means people like the music, which is always great. Because of my job I’ve had the experience of having my music played all around the world, in almost every country. When a show gets syndicated it goes everywhere. That’s a really great feeling, to know that something you’ve created is then connecting you in some way to people around the globe. And that’s what is starting to happen with White Sun; it’s beginning to make it’s way across the planet.

Gurujas: When I heard about our album going to #1, I was so filled with gratitude for our fans and supporters. I think part of the reason so many people are listening is because the songs on White Sun II are more than just music, they hold a frequency that can create positive changes. When we get this kind of news, it means people are connecting with this positive sound current. That’s everything.