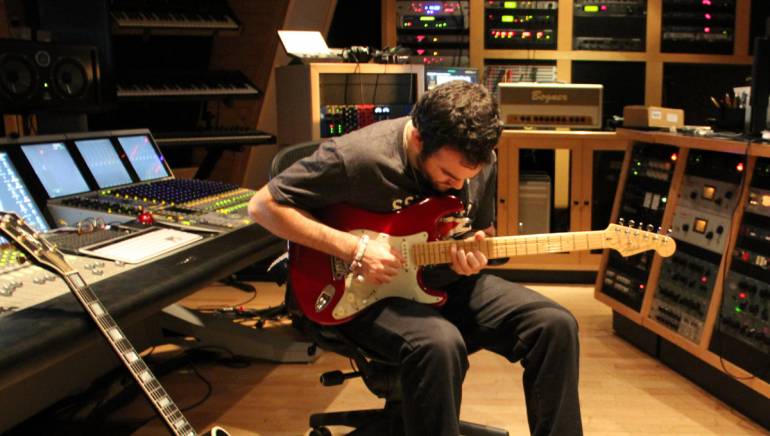 What is the soundtrack to fun? With summer in full swing, it’s an important question and one that Jonathan Keyes is intent on answering via his new collaborative project, the Blind Scuba Divers. Much like Beastie Boys, Keyes’ project contains a high dose of YOLOism in each BPM. With titles like “Workin’ on my Tan, B*tch” - which was what got him signed on the spot by Jason Flom to Lava/Republic Records - and “Models and Bottles,” which was featured along with “Check My Steezo” in this summer’s blockbuster movie 22 Jump Street, and the project’s lead single, “Jason Bourne,” it’s easy to see why audiences worldwide are connecting and why different DJs are having fun creating their own remixes, as is typical in today’s collaborative digital space. It’s all part of a very specific vision Keyes has for his music - what he calls “endless possibilities.”

But behind the party theme in Keyes’ music is an extremely hard-working individual who hardly has time to party himself. Signed to Republic Records - which featured the Blind Scuba Divers’ song “Jason Bourne” on a compilation of exciting new music last fall - Keyes has had a busy past year. Not only did he record the debut EP for his Blind Scuba Divers project Greatest Hits Volume. 2, he did so while also keeping up with his regular songwriting duties for other artists (Bebe Rexha included) and managing a small team of emerging songwriters and artists for his management division ThirtyTwoSeconds.com. So how does he do it? “I’ve chosen to sacrifice,” says Keyes, a Los Angeles native turned New York resident. “Sometimes when my friends are hanging out it means that I’m in the studio working on something. Sometimes it means being in the studio on a Sunday or on a Saturday. I’ve chosen to work at it no different than if I was training to be an athlete or training to be a classical musician – the same work ethic that those professions have is the same that comes with songwriting. From learning ProTools to learning how to edit songs and learning how to remix, I think those are all skills that come into play.”

Keyes has been honing those skills for quite some time now. He wrote his first song at age 13 and has remained dedicated to discovering new sounds since then, pursuing a degree in ethnomusicology at UCLA and putting in time at Columbia Records under then Vice President of A&R, Steve Lillywhite, and later, at Atlantic Records, under Mike Caren, now President of A&R for all of Warner Music Group’s labels. It was after his internship at Atlantic that he was called into a studio session to write some musical elements for potential songs. One of Keyes’ guitar riffs from that studio session ended up on the viral song, “Perfect Two,” by Auburn.  It was an eye-opening experience for him. “That was where I realized the power of collaboration and the power of almost expecting the impossible,” says Keyes, whose guitar licks provide the backdrop to the entire song. “When you look at the history of guitar playing in popular music, there’s always an element to the music that makes the song very memorable or helps to identify it, and often times it’s a guitar riff or a few small chords. Now because of ‘Perfect Two’ I see that endless great things can happen because of one piece of music. That song in particular gave endless possibilities to fans to create their own versions, and to show their love for a best friend, a boyfriend, a girlfriend or whatever it is. I think the song was just able to express in a very simple, uplifting and positive way the feeling that many people have.” And what’s more universal than love? To date, “Perfect Two” has more than 350 million combined views on YouTube.

Creating simple yet memorable melodies and lyrics comes naturally to Keyes because of a side gig he once had, teaching music to kindergarten and middle school kids. “That’s where I learned how important it is for a group of people to be able to sing back a melody,” says Keyes, who is signed to BMG as a songwriter and spends hours upon hours in the studio, working on his craft. “It taught me that sometimes a simple melody is what’s needed. Sometimes if you just bring it back to basic songwriting, whether it’s a group of people singing something together by a campfire or whether it’s a group of friends just sitting around a piano, that’s really what translates. To get too lost in production, too lost in the technicalities, you kind of lose the goal, which is usually to just have a bunch of people feel it.”

Keyes’ vision for his own project, Blind Scuba Divers, is all about inviting as many people as possible to the party - whether it’s the process that starts at the songwriting level or the eventual live performances that will take place once the project starts to tour. Even the way “Workin’ on my tan, B*tch” came to be is a story about unexpected collaboration. One sunny day at the Beverly Hills Hotel, Keyes and a couple of friends -including Ashley Olsen - were hanging out, and one of them mentioned a little jingle she wrote with the phrase, “workin’ on my tan, b*tch.” Keyes invited Olsen’s friend, along with a few other collaborators, to go into the studio and, a year later, the song was born. With playful lyrics like, “SPF nada / piña colada / tequila, vodka / my body gonna rock ya,” the track will resonate with listeners well beyond summer. And that’s only the beginning.

Eventually I’d like to create a new music experience that allows people to escape and engage with the Blind Scuba Divers world. You never know who’s going to be behind the mask,” explains Keyes. “I think it brings that fun element back to music and it’s definitely about taking people to a place they’ve never been. I look up to artists like Daft Punk and Deadmau5 and some of the bigger electronic artists because it’s all about the music and there’s a reason for the image behind it. With the Blind Scuba Divers, it’s a project that encompasses all different kinds of people, yet when the mask is on it unites everyone through the music.” And who wants to miss out on all that fun?