Posted in MusicWorld on October 27, 2015 by Nina Pacent 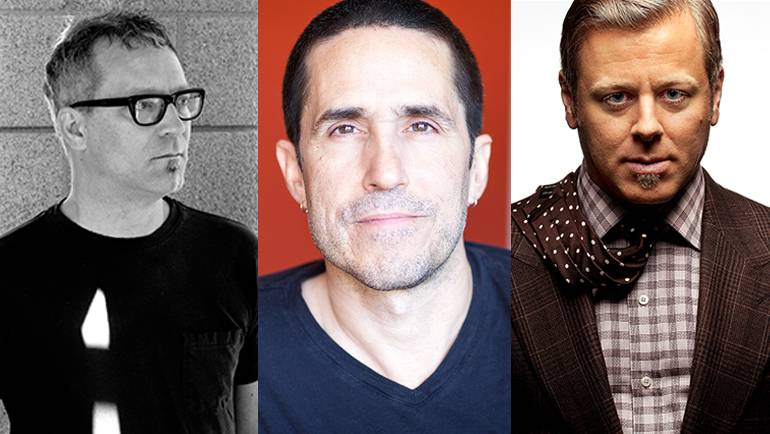 ‘Tis the season to be scary and what better way to spend Halloween than to celebrate the sinister sounds lurking in the background of our favorite thrillers. BMI composers Mac Quayle, Abel Korzeniowski and Charlie Clouser are famous for helping to keep audiences on the edge of their seats in American Horror Story: Freak Show, for which Quayle received his first Emmy nomination; Penny Dreadful, which landed Korzeniowski two Emmy nominations; and Fox’s hit Wayward Pines, which was chillingly scored by Clouser, who also co-wrote the main title theme for American Horror Story and just signed on to score the upcoming Syfy original mini-series Childhood’s End.

We caught up with the super suspenseful trio to ask them three questions (eerie coincidence, or no?). Here are the answers to just how they scare the life out of us, and yet, keep us coming back for more.

What was the scariest scene you ever wrote music for and did it work when you first viewed the film clip or did you still have work to do on it?

Mac Quayle: There is a scene early in the first episode of American Horror Story: Hotel where we see the aftermath of a horrific crime. The image made my skin crawl when I first saw it, and I knew I would have to write something equally unsettling to do it justice. My first version found the right tone and the producers agreed. I titled it ‘Eyeballs And Tongue.’

Abel Korzeniowski: It was a scene in the first season of Penny Dreadful, when Vanessa undergoes extremely cruel and gruesome medical treatment while locked in a psychiatric hospital. It was really graphic and violent. Even though a big part of the visual effects had not been finished yet at that time, it was still very disturbing to watch.

There was a one moment in that scene, when I would close my eyes for a second. It got me every time.

Charlie Clouser: I’d have to say the ending scene in the first Saw movie is still the most chilling moment I’ve scored. (SPOILER ALERT) When you see what you thought was a dead body that had been lying on the floor of the room for the whole movie suddenly rise and confront his victims, it’s one of the greatest scary twists in any horror film ever.

I actually wrote that cue very quickly. Inspiration struck as soon as I saw the scene, and within an hour or two the whole thing was basically written and mapped out. It was a great moment to score, and seemed like the perfect spot for a bold and propulsive cue, which fortunately went on to become kind of the trademark theme for all seven movies in the franchise.

What types of things do you think about or envision when you’re writing a horror score and how does it seep into the rest of your day when you’re not writing?

MQ: I really just think about the characters, the story and the images on screen. All of these help to get me in the mood, and usually I can turn off these thoughts as I go about my day. Occasionally, I might wonder if a hand may reach out of the darkness somewhere and grab me, but mostly I’m pretty numb to the effects of the subject matter.

AK: I try to understand what the real source of my character’s fear is. Let’s say there’s a sinister-looking supernatural creature attacking one of the characters. It would have been a life or death moment, had we found ourselves in this position, and that’s why we’re scared. But perhaps it’s different for the character. If she is more afraid of winning the fight and unleashing her own demons because of it, then it’s a very different kind of scare.

If a scene is very intense, and I’ve worked on it for a couple of days, I may need time to recover and take some time off.

CC: I like to picture Shelly Duvall’s terrified face from The Shining just staring, mouth wide, trembling hand barely able to keep a grip on the kitchen knife she’s holding. That image is permanently burned into my brain, and to me represents exactly what I want the audience to feel like when they’re watching the most horrific scenes. At the end of a long day writing terrifying music, I consider myself lucky if I DON’T see her face when I close my eyes.

Is it hard to go from writing a horror score to writing something completely different? How do the elements of the music, instrumentation, etc. differ?

MQ: So many of the projects I have been involved with have had a darkness to them, whether it be horror, thriller or drama. Going back and forth between these genres feels pretty natural even though the style and instrumentation might be quite different. Jumping from horror to comedy on the other hand is a huge shift, and usually requires walking the dog around the block a few times in between to cleanse the palate. The elements and instrumentation for any of these styles are completely dependent on the particular project, so there is no way to really compare them.

AK: If both are a part of the same score, then the horror part will have something in common with the lighter moment. They will be like contrasting shadows and highlights of the same painting. On the other hand, a transition from one project to a new one is like re-learning how to write. A similar or different genre doesn’t make it any easier.

CC: I kind of have a long history with dark and aggressive sounds, and I love to use atonal and dissonant elements as well. Horror films do seem to offer more opportunities to use those types of things than some other types of films, and they’re a great medium for musical sound design that’s really out there. I can really break out the harsh, aggressive sounds and chaotic, dissonant arrangements in a horror film in ways that probably wouldn’t work so well in other genres.

I do like to score suspense and thriller stuff as well, but it seems that in the horror genre, the music sometimes becomes almost another character in the film, as opposed to part of the background scenery, and that suits me fine. I love that so many iconic horror themes, like Halloween and The Exorcist are almost like little pop songs, with catchy riffs and memorable little motifs, and that way of thinking kind of meshes well with my background in songwriting and album work.