Posted in MusicWorld on December 24, 2009 by Bruce Britt 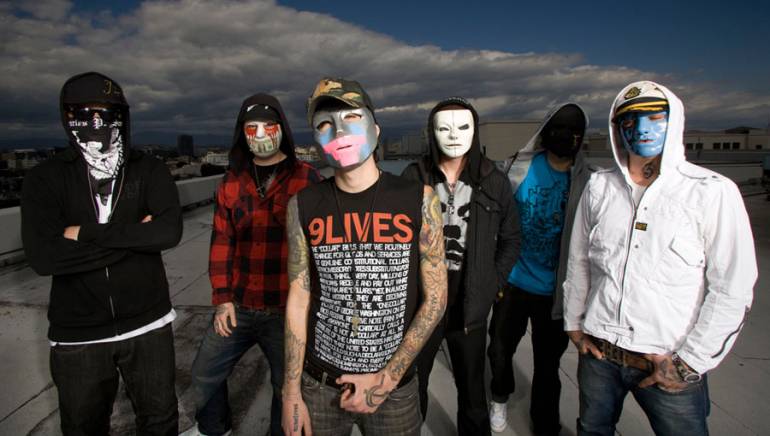 With their debut album Swan Songs, rap-rockers Hollywood Undead answer a rhetorical musical question: What do you get when you combine the hip-hop fury of Eminem with the metalloid Sturm und Drang of Limp Bizkit?

Fusing urban and suburban musical sensibilities, Hollywood Undead’s evocative gangsta-rock seem apropos for a band whose lineup sounds like a Mafioso summit. Showcasing the talents of Charlie Scene, Johnny 3 Tears, J-Dog, Funny Man, Da Kurlzz and Deuce, Hollywood Undead’s street-tough image has already been vetted during its short career. The band defected to A&M/Octone Records after two previous labels tried to censor their songs. It took the group over a year to iron out legal formalities and get Swan Songs in stores.

Like their forebears the Red Hot Chili Peppers, Hollywood Undead are so enamored of their titular California hometown that the group actually lists the city as an influence. As befitting a band with Tinseltown roots, HU puts a new spin on glamour and sleaze, appropriating the masked antics of KISS and Slipknot to complement their two-fisted musical assault.

Prior to the 2008 release of Swan Songs, HU’s music had received an impressive 8 million plays on their MySpace page. Thanks to the exposure afforded them by A&M/Octone Records, the group’s MySpace play tally skyrocketed to over 40 million hits as of July 2009. The quintet won further notoriety after they licensed songs to the popular video games Madden NFL ‘09, UFC 2009 Undisputed and Rock Band 2.

Swan Songs debuted in the Billboard top 25, thus fulfilling HU’s promise as a 2009 band to watch. The group recently recorded their first live DVD in New Mexico and Arizona, and if the disc is anything like HU’s music videos, it will raise rock & roll debauchery to new heights.