Posted in MusicWorld on August 11, 2008 by Rob Patterson 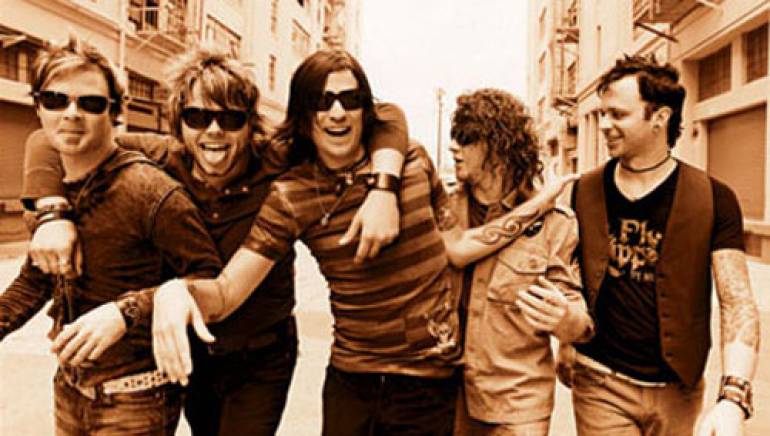 In the case of Hinder, the band name has certainly proved itself ironic. Nothing at all has hindered the Oklahoma City-bred quintet from shooting to the top with their first major label album, Extreme Behavior, which reached #6 on the Billboard Hot 200 and racked up sales of three million copies. Add to that a triple-platinum single (“Lips of an Angel”) that also hit #1 on the Pop 100, Hot Digital Songs, Top 40 Mainstream and Hot Adult Top 40 Recurrents charts as well as #3 on the Billboard Hot 100. And the just to underscore the point, throw in two more gold singles (“How Long” and “Get Stoned”) and it’s obvious that nothing seems to hinder Hinder.

With only one previous indie album to the band’s credit, Hinder was the object of a bidding war among a number of labels before they inked a deal with Universal. Not a bad leap to the major leagues a mere four years after Hinder started when drummer Cody Hanson and guitarist Joe “Blower” Garvey heard singer Austin Winkler singing in a cover band at a college dorm party.

“I heard him and was blown away,” says Hanson. “He has the kind of charisma very few people have and that unique voice. You can’t really compare him to anybody.”

Winkler credits such singers as Aerosmith’s Steven Tyler, Vince Neil of Mötley Crüe and Buckcherry’s Josh Todd with providing the models that inspired his style. With the addition of bassist Mike Rodden and guitarist Mark King, Hinder set out to revive the arena-packing rock of bands like Aerosmith, Bad Company and The Rolling Stones.

And their object was also to bring back the party-hearty decadence that was once stock-in-trade for hard-rock bands rather than the angst that many of today’s rockers express in song. “We didn’t want to be just another faceless rock band playing depressing ‘I hate my dad’ music,” explains Hanson. “We wanted to go out there and kick ass like they did in the ’80s.”

They recorded Extreme Behavior with producer Brian Howes and engineer Mike Fraser in Vancouver, BC. Even before its official release, the band’s debut single, “Get Stoned,” was receiving heavy play on breakout radio stations in Dallas and Vancouver.

“Lips Of An Angel” secured the band’s success by also hitting #1 in Canada, Australia and New Zealand, while a cover of the song by country artist Jack Ingram was a Top 20 country single. With their second album, Take It To The Limit, slated for early November release, Hinder plans to live up to the title not just by singing about the rock & roll life but enjoying it to the hilt themselves.

“We live the lifestyle,” concludes Hanson. “That’s what rock is supposed to be about: rebellion and having fun. We’ve been blessed with the opportunity to play music as a career, so we might as well take advantage of it and have a good time.”