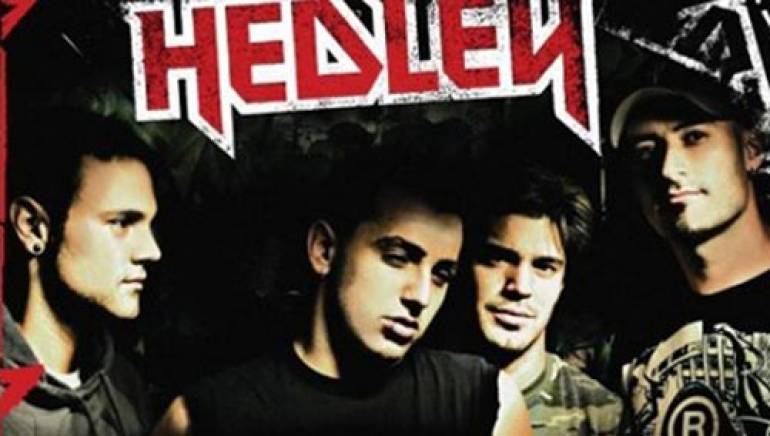 The self-titled debut album from Vancouver rockers Hedley, which has been certified Platinum in Canada, will be released in the U.S. on Sept. 12. The band is currently on tour with Capitol labelmates Yellowcard.

Jacob Hoggard was known around Vancouver as the singer/daredevil for popular local rockers Hedley, who had quickly made a name for themselves as an incendiary live band whose offstage exploits were just as unpredictable as their show, but whose gutsy, anthemic songs were the real attraction.

He was also known as a guy who never turned down a bet, including (but not limited to) eating things off the floor for money. So when his bandmates bet him $150 to audition for TV’s Canadian Idol, he had a reputation to protect. And, says Hoggard, “It was either spend a summer working construction or appearing drunk on television.”

However, he was not prepared to actually be chosen as a contestant. And considering he’d occasionally perform on the show half-sloshed in a skin-tight latex bodysuit, he was definitely not expecting to make it to the finals, which he did handily, courtesy of a new legion of fans. But by that point the joke had become surreal.

So he said thanks, but no thanks, and promptly posted a note on his blog asking his fans to vote him off the show, which they mercifully did.

Besides, the country probably wasn’t ready for an Idol who had up until that point had been focusing on drinking beer and stealing cars. “The whole thing was awesome fun,” he says. “I was a born attention-seeker. And live national television, as I found out, totally milks that craving.”

So he returned home a hero of sorts, anxious to get back to Hedley, but came back to find his bandmates had already moved on: applying to colleges, getting day jobs, and generally getting on with their lives.

Fortunately, three guys from another local Vancouver band—bassist Tommy Mac, guitarist Dave Rosin and drummer Chris Crippin—needed a new singer and reached out to Hoggard. Things clicked immediately and the reinvented Hedley reworked old songs, wrote new songs, and sharpened their sound. “Tom was a total metalhead and I was listening to stuff like Jimmy Eat World at the time, but somehow it worked,” says Hoggard.

In short order the band recorded a demo, got signed to a record deal in Canada, and found two established producers who wanted to work with them: Gggarth Richardson (Rage Against the Machine, Red Hot Chili Peppers, Trapt) and Brian Howes (Hinder, Closure, DDT).

And suddenly the band had a Platinum album in Canada, producing three chart-topping singles including the infectious rock anthem “On My Own,” sweeping power ballad “Trip” and high-voltage screamer “321,” earning two Juno nominations in the process. And the album goes deeper yet; the sneering riff-rock of album opener “Villain,” acoustic stunner “Gunnin,” and pounding classic rock closer “I Dont Believe It.”