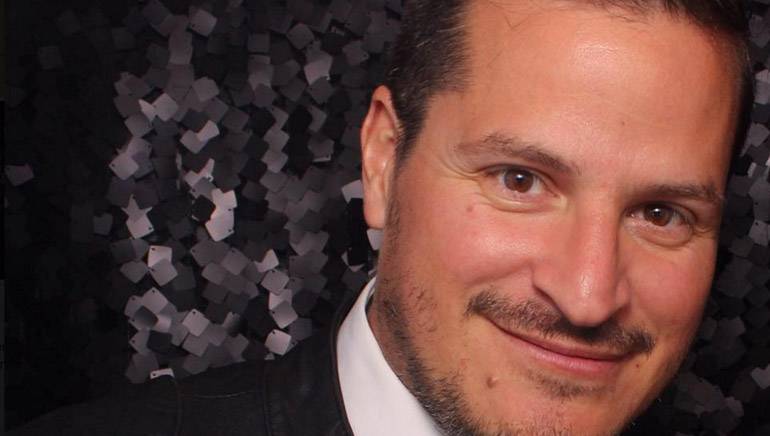 Every artist needs a secret weapon, and for award-winning composer H. Scott Salinas, it’s versatility. That, and a one-dollar piece of tubing from Home Depot (more on that later).

Salinas, who studied at Princeton University and Berklee College of Music, was the youngest Grand Prize Winner of Turner Classic Movies’ Young Film Composers Competition in 2002. Since, he’s scored music for feature and documentary films (City of Ghosts, Just Friends, Cartel Land, The Ivory Game), television shows (The Newsroom, Murder in the First), video games (Spider-Man 3, The Matrix: Path of Neo), and advertising campaigns (Coca-Cola, McDonalds). He has been distinguished with awards from Cannes Lion, Clio, BMI, and recently, the Jerry Goldsmith Awards.

We caught up with Scott and talked about how to create music that complements a plot without overwhelming it, why empathy figures into composing, how the characters in a story can shape the score, and when you should and shouldn’t judge the music you’re creating.

Several projects you’ve worked on are being released around the same time — City of Ghosts, The Ballad of Lefty Brown, Birth of the Dragon. How did you change gears between such thematically diverse projects?

I think the key lies in having the most complete vision possible before you sit down to write one note. The more time and energy you can spend imagining the music — and the more conceptual you can be about the score — the better chance you have of sitting down and writing something that really complements the film.

Ideally, you are building that vision by having lots of conversations with the director, and [by] listening to music, so you’ve got a honed-in idea of what you want to do before you do it. For instance, in Birth of the Dragon, the film is about a young Bruce Lee who hasn’t fully developed into who he finally becomes until the end of the film. So we talked about his theme being less of a melody and more of a chord progression, the foundation of a theme. Where as Wong Jack Man — the Shaolin monk in the film — is fully complete in who he is, and he has more of a straight-up tune. So before even writing one note, we’ve got parameters that will guide the creative process, that come from the story and the essence of the film.

Then, next thing you know, you’ve smoothly changed gears from one project to the next without even trying.

Composing music that enhances a film and encourages an emotional response from the viewer seems like an incredible balancing act. How do you create music that translates the essence of the plot line without overwhelming it?

The key to this is empathy. You have to be in tune with how other people feel, and have a strong sense of what a piece of music makes you feel. For instance, you might know what you like and don’t like as far as taste goes, but that’s totally different than how something is going to make someone feel. And as a composer, you have to get into this vulnerable space when you are creating where you don’t judge the music.

Then, once it’s created, you have to put on a different hat and totally judge how it makes you feel, and be honest with whether it’s working or not. A 5-year-old can tell 99 percent of the time, so you should be able to if you allow yourself to be honest and don’t get attached to an idea because it’s musically satisfying. It ultimately needs to be satisfying to the story.

One of the keys to not getting attached is when you write something really neat that you love — but that isn’t working for the scene — it’s probably going to work great elsewhere in the film, or perhaps in another film. Getting the scene wrong isn’t a failure if you wrote a cool piece of music, it just means you have to put that aside and try something new. And that flexibility of being able to score the same scene several different ways is really where you start to flex your muscle as a film composer.

How about having to work around the natural sounds that take place in the scene itself?

The key here is always having the dialogue and [sound] FX on while you compose. It’s easy to get into the habit of turning off all [of] the sound and just working to picture — it’s very satisfying and fun. But you wind up turning all that stuff back on, and [you] realize you made some big mistakes. Maybe the melody is in all the wrong places or the flute you chose sounds just like the birds in the scene. If you start composing with the sound on — and leave it on — you will naturally create something that complements it.

You’ve utilized some unusual instruments to create the sound you’re looking for, such as the pocket piano you found at a luggage store in San Francisco for a scene in City of Ghosts. What’s the weirdest musical instrument — or object you’ve used as one — you’ve used in a scoring project?

That was actually Jackson — my co-collaborator/conspirator on the film — who found that, but it’s always nice to find some new toys to play with. In this case it was literally a kids’ toy, a really fun one that I’ve used many times. It’s a kind of secret weapon —plastic flexible tubing you can buy at Home Depot. When you take it and spin it, it makes a haunting, pretty, windy tone. The faster you spin it, the higher the pitch goes, so you can get these really neat sounds and you are literally just spinning [a] one-dollar piece of tubing from a hardware store.

You also worked on Aaron Sorkin’s acclaimed series The Newsroom and dark thriller Murder in the First. How is working on a television score different than working on a movie score?

The biggest difference is the way the collaboration works. There are some exceptions, but generally in TV the composer really needs to hit a home run right off the bat, and 80 to 90 percent of the cues need to be correct. If you aren’t nailing it, you will probably get fired. There just isn’t time. And on top of that, you don’t have a lot of time for feedback. You spot the episode, you score the whole thing, then you get a round of notes — maybe a day before the mix — and then on the stage they might make some last-minute changes. I think it’s one of the reasons show runners are so loyal once they find someone they like, because they have confidence that they get each other.

You can be the best composer, but if you go too far out on a limb, there isn’t time to make an adjustment. In film, the collaboration is much longer and there is much more room to fail. So if you allow yourself, you can wind up with some really unexpected results. The neat thing about TV is if you are nailing it, your final product is pretty close to your first idea.

It’s been a few years since you’ve worked on a video game, but you’ve composed theme music and other music for games including Spider-Man 3 (Activision), Solitaire (Titan) and The Matrix: Path of Neo (Atari/Shiny Entertainment). Tell us about the experience of scoring for video games.

Video games are super fun and I would LOVE to do more, if anyone out there is listening! One of the biggest differences is that you do a tremendous amount of composing away from picture. Also, you have to build your music in ways that it can layer and loop, so it needs to be musical and exciting and on brief, but also works in a modular way so you can mute or add certain elements as things interactively happen in the game.

Also, the sheer amount of music can be very intimidating. The project management aspect of video games is very crucial; often composers will work with their own sort of internal project manager or producer to help keep track of all the deadlines and deliverables.

You’ve also composed music for iconic brands like Coca-Cola, McDonalds, Mercedes and British Airways. Is the way you approach an advertising client different than how you’d work with a filmmaker or TV producer?

Advertising is really its own beast. You have so many different parties to satisfy, and there are so many folks with an opinion. You have to be really good at identifying who your boss is in any given situation, and make sure they are happy. It’s not always immediately obvious.

That being said, working in that shorter format — 30 to 60 seconds — can be really fun because you have just enough time to say one thing, [to] have one idea that’s really clever. And they often spend a lot of money. A lot of my early orchestral recordings were from commercials where they would hire a 80-piece orchestra for a 30-second spot. You can really develop your production chops.

Earlier this year, BMI recognized you for your work on Murder in the First, and you were also recently honored at the Jerry Goldsmith Awards with their “Golden Jerry” award and as “Best Documentary Composer” for The Ivory Game. How does it feel to be recognized by your industry?

Honestly, it feels amazing. As much as what we do is collaborative, the vast majority of our time is spent alone in a room. So when you work hard on your craft and put yourself out there, it’s quite vulnerable. Most of us build this protective shield around ourselves to brace for criticism. So when you are honored for your work it’s like getting a giant hug from the world. It definitely recharges the mojo and the gas tank.

Also, the thing I found so impressive — especially in Spain for the Jerry Goldsmith Awards — was how many fans there are of film music in general. Living in Los Angeles — and being in the industry — directors and actors are obviously the people who most folks care about. So to know there are so many fans of just the music in films is really exciting and energizing.

How did you start working with BMI, and how have they fostered your career?

It’s one word: Doreen. [Doreen Ringer-Ross, BMI Vice President Film, TV & Visual Media Relations]. I reached out to her three or four years ago and boldly asked for a meeting, even though she didn’t know who I was. She was very kind to meet with me for almost two hours. She was so nurturing and also had so many anecdotes to share that halfway through the meeting I realized I was in a half therapy session, half master class. When I left that room I was sprinting to fill out my BMI forms.

Since then, she’s been incredibly supportive. I’ve been fortunate enough to have been on the composer panels at BMI a few times and that’s always been rewarding. Also, her musical chair dinner at Sundance is a once-in-a-lifetime experience. She’s one of those amazing people who can track so many composers and know exactly what you’ve been up to without skipping a beat.

Over time I’ve developed a relationship with other folks in the staff, and I always feel very supported. Not to mention the BMI Awards Dinner, which is such a great opportunity to get to know other composers. So, yes — I’m a big fan!