Posted in MusicWorld on July 1, 2011 by Ari Surdoval 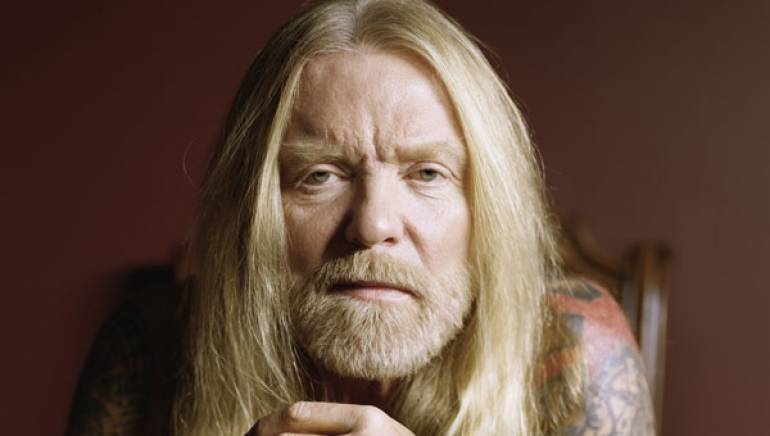 Gregg Allman is no stranger to the blues. As singer, songwriter, and organ player for the Allman Brothers Band, he has taken them about as far as they have ever gone. As skeletal 12-string Piedmont finger-picking stretches into swirling chromatic rhapsodies of improvisation, his Hammond B-3 sloshes against thundering double drummers and dueling Les Pauls howling through 100-watt Marshalls. The sound conjures electric ghosts of John Coltrane, Miles Davis, Bob Wills, Jimmy Smith, Elmore James, Willie McTell — hour after hour, night after night, show after show, mile after mile, year after year, decade after decade, death after death. That’s the blues. But, okay, call it southern rock if you want. File it next to Sun Ra.

Just don’t expect it from the stripped-down Low Country Blues, Allman’s first solo album in 14 years, featuring covers of artists such as Otis Rush, Amos Millburn and Muddy Waters and one Allman original. Produced by T-Bone Burnett with his usual level of finesse and perspective, the carefully crafted collection genuflects before the greasy beauty of the originals, approaching them respectfully, in time and in tune, spaciously arranged by Allman and intuitively played by a crack band that includes the great Dr. John on piano, guitarist Doyle Bramhall II, bassist Dennis Crouch and drummer Jay Belrose. From the popping Memphis r&b of Bobby Bland’s “Blind Man,” to the eerie acoustic blues of Skip James’ “Devil Got My Woman” and Sleepy John Estes’ “Floating Bridge,” to the tremolo-drenched west side soul of Chicago’s criminally overlooked Magic Sam, the album serves as a primer on some of the blues’ bedrocks and best kept secrets.

There was only one problem.

“I didn’t like none of ’em at first,” Allman says. “T-Bone Burnett had sent me a disc of all these different songs and said, ‘Pick some.’ So I did. And then I kept arranging and rearranging them until they all meant something to me. They’re just great old songs. They bring me back to when I first started playing music. That’s what my brother and I were listening to — right, left and in-between.”

Allman’s brother — the truly incomparable guitarist Duane Allman, who formed the Allman Brothers Band in Georgia and then insisted Gregg join them — died tragically in a motorcycle accident at just 24. It was not the first sudden, awful loss that Allman had experienced — his father was murdered when Gregg was just two years old — and it was far from the last. Allman Brothers’ bassist Berry Oakley also died in a motorcycle accident, one year and just three blocks from the scene of Duane’s crash. For Allman, there have been many hard years and countless struggles since, but the connection to his brother remains strong. Particularly at the sessions for Low Country Blues.

“My brother felt like he was there,” Allman says. “I don’t want to get too spiritual, but a lot of times I can really feel him. And there were times where it felt like he was right there in the studio. These songs are the roots of what the Allman Brothers play. Before they came up with that name Allman Brothers — which neither my brother or I liked —we were playing rhythm & blues together.”

Still, the sparse soul of Low Country Blues is very different from the dense jams of the Allman Brothers and the raucous genre they are credited with inventing.

“I am always ready to try something new,” Allman says. “I have an open mind like the Grand Canyon. And I don’t know who came up with that term southern rock, but dig it: There were four kings of rock & roll—two black, two white. Little Richard Penniman, Macon Georgia; Jerry Lee Lewis, Ferriday, Louisiana; Elvis Aaron Presley, Tupelo, Mississippi. And Chuck Berry, who was from St. Louis, but majority rules. Rock & roll and the blues were born in the South. So saying southern rock is like saying ‘rock rock.’ But on the other hand, it did give them a section to put us in. And though you’ve got all those rebel flag fliers there — ahem, we won’t mention any names — it’s not a bad section to be in. I’ve heard it so long, it is starting to fade out. The term. Not the music. The music still goes.”

Read more of Ari Surdoval’s work at The Big Get Even.