Posted in MusicWorld on May 8, 2008 by Rob Patterson 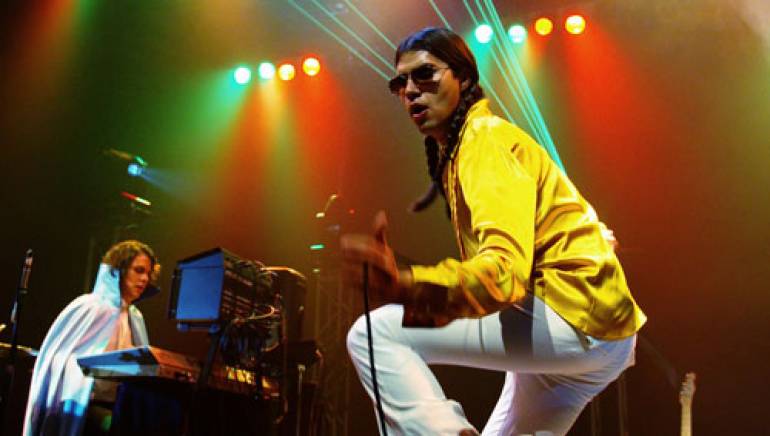 You may not ever hear the Austin, TX-based duo Ghostland Observatory perform the Paul Anka-penned signature Sinatra song “My Way.” But their musical and career independence has certainly served them well.

With three albums out on their own Trashy Moped Records — delete.delete.i.eat.meat, Paparazzi Lightning and Robotique Majestique — the act has landed itself on Late Night with Conan O’Brien and the long-running PBS concert show Austin City Limits (which yielded their first DVD, Live From Austin TX, on New West Records). Ghostland Observatory also boast three live albums taken from their sets at the Austin City Limits Music Festival in 2006 and 2007 and their appearance at last year’s Lollapalooza.

Their rapid rise piqued record company interest, but the act prefers to remain masters of their own music business fate. “We listened to what some major labels offered us, and there wasn’t much of a difference between what they could offer and what we can offer ourselves,” says synthesizer player and drummer Thomas Ross Turner, who likes to take the stage wearing a flowing cape. “That old-school apparatus — sign to a label, get a manager, a publicist, get a video on MTV, this and that — those things aren’t so necessary anymore.”

Ghostland Observatory — whose other member is singer and occasional guitarist Aaron Behrens — has won a wide swath of fans by melding the sometimes seemingly disparate elements of electro and rock. “In the 1990s, you either liked rock or you were into techno,” Turner explains. “The rock people didn’t embrace electronic music at all. Then Radiohead and others started to combine the two, and people started to think, ‘Oh, yeah, that’s kind of cool’.”

The twosome plan on continuing to make their own way musically and in how the market and promote their music, relying on the strength and spirit of what they create. “Who knows what the future will bring,” Turner concludes. “As long as we’re honest and we try our hardest to put on the best show we can, I believe we’ll always shine through.”