Posted in MusicWorld on February 19, 2020 by Malcolm Venable 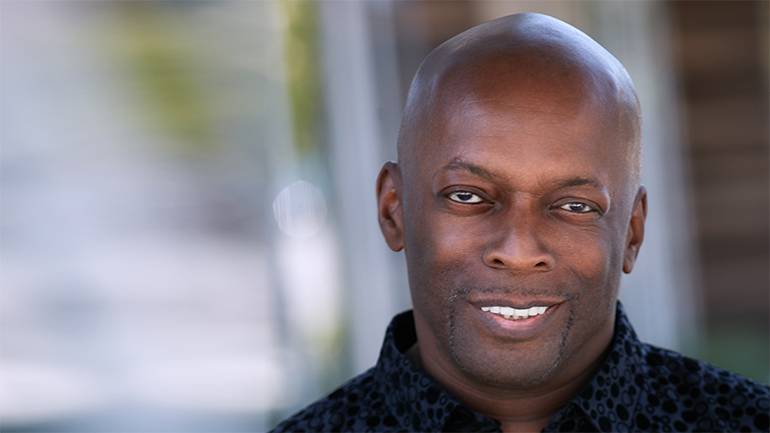 As one of the most talented TV and film composers working today, Kurt Farquhar knows the value of a good story better than most. Having composed for series including CBS’ King of Queens, BET’s Being Mary Jane and dozens more, the Chicago native also created several enduring theme songs—including the theme for Moesha (UPN)—during his 30-year career.

Though Farquhar, who’s scored more primetime series than any other African American composer, is an expert at making music to fit a narrative, his own story rivals any of the many dramas he’s been tapped to score. Farquhar spent more than a year living on the streets of Los Angeles in the mid 80’s.

Despite studying music at Eastern Illinois University and attending the National Conservatory of Music in Versailles, France, Farquhar found that opportunities were slim, and he spent days wandering LA, sleeping under archways. By 1989, his fortune changed: his brother Ralph became a TV writer and had him write a theme song for the show Livin’ Large.

The show didn’t last but Farquhar did; after that big break, he went on to compose for a plethora of films and shows, including CBS’ The Neighborhood, which not long ago erected a billboard near the very spot Farquhar used to lay his head. Never one to shy away from the experience, the seven-time BMI Award winner, known for his work on hit series including Girlfriends (UPN) and The Game (BET, The CW), among others, happily shares his story as an example of hope and perseverance. BMI recently connected with Farquhar to gain insight on his journey, how he’s stretched as a composer and what he’d like to conquer next.

You’ve talked about being homeless for a period of time before your big breaks. Tell us about that experience. What part of it, if any, do you still carry with you now, and how does it influence your art? What happened to change your circumstances?

Do I carry this experience with me now? Yes! I am a far more empathetic and caring person from what happened. I don’t judge others as quickly or harshly. I can see things from another person’s point of view more easily. You never know what folks are going through! Getting in touch with empathy and having the ability to understand without judgement other people’s circumstances are good traits in a composer, especially when doing dramas!

I got my first record deal during this period. That got me off the streets solidly, but it was just the beginning of my journey.

Since that time, you’ve been called the ‘musical voice of BET’ for having scored so many titles on the network. How have you stayed relevant for the audience as tastes have changed over the years?

I’ve changed with the times! Before BET, I did a huge number of shows on UPN. Before that, it was extraordinary how many shows I had on Fox. I tend to not get caught up in a sound or a style at any given moment. I let the stories, the picture and my gifted producers and directors guide my hand. I am THEIR instrument. I allow myself to constantly be in search of new inspiration. I think that if I didn’t, they wouldn’t have to put me out to pasture, I’d just stroll out on my own! I love music to pictures… I love it in all its iterations. I love classic scores, atonal scores, urban scores, sound design laden scores, melodic scores… all of it! I especially love the sound that I don’t know is coming especially when it’s coming from me. As long as I have the capacity to surprise myself with musical thoughts and sounds, I’ll keep on doing the dang thang!

Your music has been part of so many unforgettable TV shows that are iconic to a lot of people—including Girlfriends and King of Queens. How do you approach each project?

I let each project and each producer speak to me. I don’t start any project with preconceived notions of what it should be. I remain open to inspiration. In the case of Girlfriends, executive producer Mara Brock Akil had very strong opinions about what she wanted the show to sound like. If you notice though, the sound changed over the course of years. She liked doing things like that. Listen to how different the sounds were that she and husband (director) Salim Akil had me do for The Game (UPN/BET), Being Mary Jane (BET) and Black Lightning (CW). Constantly changing! I love it!

The King of Queens sound was born out of a very inspiring conversation with executive producer Michael Weithorn, whom I also worked with on Sinbad (FOX), South Central (FOX) and Ned and Stacey (NBC). Michael was a drummer when he was younger, and he felt that a strong percussive style would be really interesting. I added that we could make all the other instruments join the percussion section by banging, sliding and popping their instruments. As a drummer myself, it made for a really fun score for a very funny show!

What makes a theme song immortal and how do you make them so memorable?

Syndication makes them immortal. Melody makes them memorable. And sometimes you just have to get lucky and find magic, as was the case with Moesha (UPN). The producers had asked me to do a theme song, so I got started on it right away. Several days later, they said that now they wanted the star of the show (recording artist Brandy) to co-write it with me. She came over to my place and sang me an idea she had. I got a big smile on my face and said that I had to show her something. I started the musical track that I was working on days before and told her to start singing her idea again after four bars. What she had written was in the same key as my track, changed at all the same places and ended at the exact same time! Magic! We recorded a few days later, not having to make one single change!

You’ve said scoring for TV and film are entirely different. How so?

Scope! I think there are things that I would do for a film that would feel a little too weighty for a TV show. I tend to be very sensitive to these types of things.

You’ve been well loved for your work on comedies, but have also done dramas and in recent years, the superhero/sci-fi show Black Lightning. Can you talk about the process of stretching yourself to do that type of work? What was the transition into doing it like and how did you accomplish it?

I was very disappointed for a long while that I didn’t get to do dramas. I once thought that I never would. Then, after working really hard to change the perception of what I could do, I started getting dramas and they just kept coming! These days, most producers think of me more as a drama guy and are actually surprised when they see me do something comical. I still love doing comedies though! I need the laughs in my life! I’m currently having a great time back on CBS with their new hit comedy The Neighborhood. As for Black Lightning (CW), it is one of the most exciting and most challenging scores that I’ve ever had the pleasure of doing. Showrunner Salim Akil gives a lot of latitude to me and the musical team, but at the same time, he is so completely immersed in all things musical with this show! I love his challenges and his direction. I hear him in my head while writing each cue! It’s been one of the best artistic situations ever. I’m so gratified to hear every week how much the fans are liking what we do!

What’s your most memorable encounter with a fan? What kinds of things do they tell you about your scores and theme songs?

True story: one of my new team members, Deja Seigler, told me last Halloween that she needed to get a recording of the Moesha theme song, because she was going to play it on a boom box as she went to Halloween parties in her Moesha costume. Moesha was her favorite show! I thought that was pretty cool and amazing that she ended up working here with me!

It’s always been really sweet when folks meet me and say how important certain theme songs have been for them. How they’ve grown up on my music and now a totally new generation is relating to what I do. It’s really humbling!

I want an A-list Marvel feature! I’m certain that I would bring something truly special and different to that space. That, and I would love to see the look on the faces on my two young boys, True and Kamen, at that opening night! I won’t stop until I get it, so Marvel, you may as well make that call now!!!

You’re a seven-time BMI Award winner! How has being part of the BMI family impacted your work, your creative process and your extensive career?

I’ve always said to younger composers… real support is key! Support from mentors and friends, true believers and family. BMI is family and you will need them just like I did and always will!