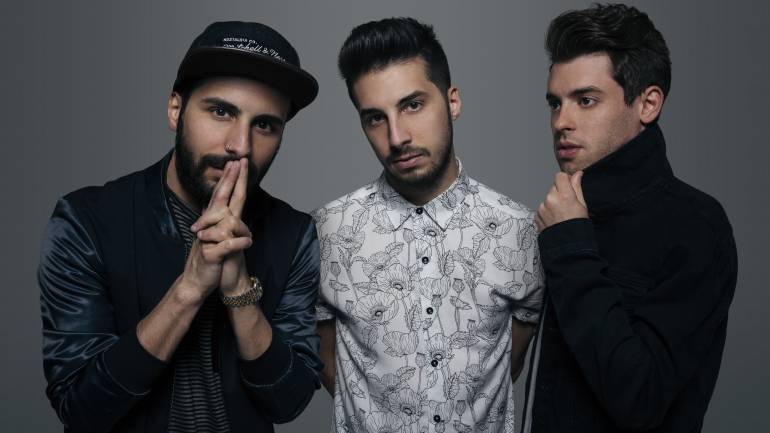 Initially emerging as an electronic pop act in the mid-2000’s, New Jersey’s Cash Cash has transformed into a wildly versatile production trio, seamlessly able to mix and merge aspects of rock, pop, house, rap, trap and all points in between into their highly infectious dance music. Their most recent album, Blood, Sweet & 3 Years, is a testament to that versatility, roping in collaborators ranging from 90’s rappers Nelly and Busta Rhymes through Goo Goo Dolls lead singer John Rzeznik into an energetic EDM context. BMI reached out to Jean Paul Makhlouf of Cash Cash to find out how they make it all work.

Q: How did you start producing and writing?

A: We started back in high school just messing around with our computers. We slowly bought pieces of equipment each year to build and expand our studio. Overall we learned 99.9% of what we know from trial and error. Eventually, the music started to sound competitive, and we realized we were onto something. As far as writing goes, we began writing with instruments such as guitar, piano, bass, drums which are still an important part of our writing process even though we’re creating electronic music.

Q: What is one of your favorite songs that you produced and why?

A: It’s hard to pick one but I would say either “Millionaire,” featuring Nelly or “Lightning” featuring John Rzeznik of the Goo Goo Dolls. The three of us grew up heavily influenced by the Goo Goo Dolls, so to actually get in the studio and create something together with Rzeznik made for one of those priceless unforgettable moments. As for “Millionaire,” kicking it with Nelly in the studio was probably the most fun we’ve ever had with a feature in our whole career producing. Him and his crew are just absolutely hilarious and literally lit up the whole room. There were a lot of laughs, a lot of munchies, and a lot of work done that day.

Q: Who is someone you would love to collaborate with?

A: It would be great to collaborate with Bruno Mars, Katy Perry, or even someone like Steven Tyler or Celine Dion.

Q: What is a current guilty pleasure musically?

A: I don’t know what’s considered a guilty pleasure these days, given that people seem to be so much more open to liking all genres of music, and I think the dance and festival scenes are heavily responsible for that. Festivals that merge indie rock, dance, hip-hop, pop, and rock are truly inspiring. People aren’t afraid to admit liking stuff that’s on the radio or singing along to a dumb song with no substance and accepting it for what it is. I think the world is headed in the right direction at least as far as being music listeners goes. There’s so much good music out there and to limit yourself to a couple styles is just idiotic.

Q: What can we expect from you in the next year?

A: Lots of new music! Our new album Blood, Sweat & 3 Years just came out. It’s filled with the best songs I think we’ve ever written, with some of the most talented features out there. We merged some really unique artists from so many different genres to make an extremely diverse-yet-cohesive album. We wanted to take electronic music in some different directions by getting in the lab with artists that might not be your typical dance music feature. We also have a residency at Marquee in Las Vegas as well as Premier Nightclub in Atlantic City, so you can catch us there a ton. Aside from that, we’re constantly playing shows every week so be sure to keep up with us on our website for all the latest tour dates.