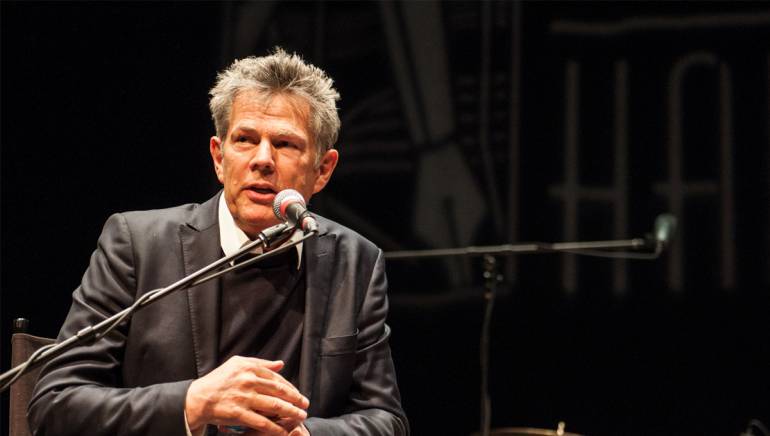 The first installment of the Songwriters Hall of Fame (SHOF) Master Sessions at the University of Southern California (USC) Thornton School of Music kicked off on April 19 with a very special member of the Broadcast Music, Inc. family: legendary songwriter, music producer, SHOF inductee and BMI Icon David Foster. This new partnership between the USC Thornton School of Music and SHOF is meant to provide students with invaluable insight into the art, craft and profession of songwriting, and will be an ongoing series integrated into the curriculum of USC Thornton’s groundbreaking Popular Music Program, which launched in 2009 as the first bachelor’s degree program of its kind within a major U.S. university. USC Thornton’s Vice Dean of Contemporary Music and Founding Director of the Popular Music Program, Chris Sampson, moderated the event, held at the Carson Soundstage on the USC campus in Los Angeles, and served as co-host, along with SHOF Board Member Mary Jo Mennella of Music Asset Management, Inc.

During the session, Foster, a 16-time Grammy winner and three-time Oscar nominee known for his work with Celine Dion, Barbra Streisand, Whitney Houston, Madonna, Michael Jackson, Michael Bolton and many others, touched upon many aspects of his career, including his work as a session keyboard player, arranger, songwriter, producer and music executive. He spoke about the value of networking, “doing what you love,” and even opened up about opportunities “that got away” from him. Toward the end of the session, Foster took questions and encouraged some of the students to join him onstage to perform, offering on-the-spot coaching. Foster concluded on a positive note, stating, “The recording industry is in peril, but the music business is thriving,” after which he received a standing ovation.

“How exciting to be a part of fostering this new partnership between SHOF and the USC Thornton School of Music, which follows in the SHOF’s long tradition of providing opportunities for young songwriters to experience an intimate view of the craft and processes of some of the most important songwriters of the day. There is no better way to kick off the Master Sessions than with David Foster,” said BMI’s Barbara Cane, a member of SHOF’s West Coast Committee.

Next month, Cane will be honored with a USC Thornton School of Music Brandon Mehrle Service Award, which recognizes individuals who have shown support to the School through an extraordinary commitment of energy and skills.