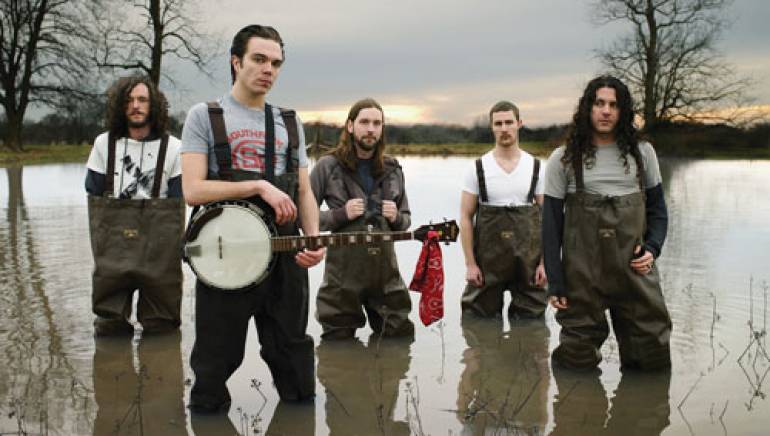 Fair to Midland may take their name from a play on words in their home state of Texas for the expression “fair to middlin’,” but their goals are far loftier than the moniker might imply. In fact, the quintet aims to create a progressive rock sound for the new millennium that blends many of the strains, styles and hyphenated variations under the rock and pop banner into a cohesive whole.

The band started out in 1998 in small town of Sulphur Springs, founded by singer Darroh Sudderth and guitarist Cliff Campbell. Their early years found the act taking a totally DIY approach to the music business, releasing an EP in 2001 (The Carbon Copy Silver Lining) and full album in 2004 (Inter.Funda.Stifle) on their own independent label. The discs and the band’s take-no-prisoners live performances earned the band a slot on Music Connection’s 2005 list of 100 best unsigned bands, but even an independent label deal remained elusive up to them.

But things quickly changed when a friend of System of a Down singer Serj Tankian caught Fair to Midland at an LA club show and passed their CD on to Tankian. Duly impressed, he also caught the band live and immediately offered them a deal on his Serjical Strike label, distributed by Universal.

Serjical Strike primed the public pump with The Drawn and Quartered EP, which combined the best of their previous work with live recordings and other goodies. Then the band recorded their label debut, Fables from a Mayfly: What I Tell You Three Times Is True, with producer David Bottrill, and since it was released in early summer 2007 the band has been off and running. The disk hit #2 on Billboard’s Heatseekers chart and the song “Dance of the Manatee” reached the Top 20 on the Hot Mainstream Rock Tracks chart while Fair to Midland tore up the tour and festival circuit.

While the group’s diverse set of influences may have daunted their rise in their early years, it looks to serve them well in the long run. “For the most part, our musical tastes are completely different,” says Sudderth, “All of our songs are just us trying to find a happy medium between what everyone in the band listens to.”