Posted in MusicWorld on April 6, 2010 by Malcolm Venable 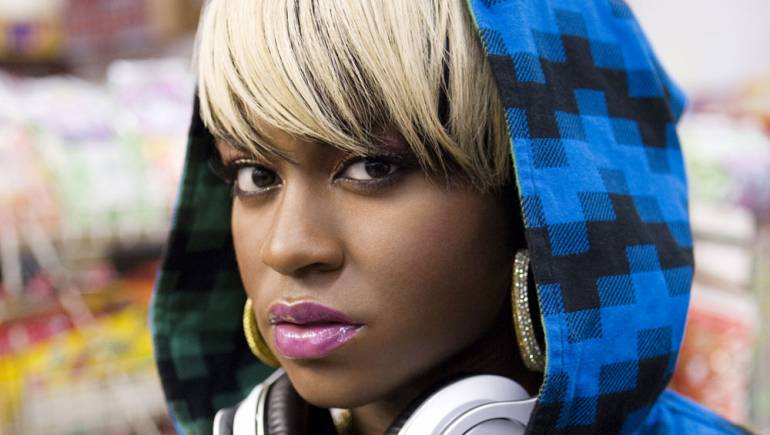 If music appeared in color, Ester Dean’s would dazzle in eye-popping neon.

Look at her logo: her name, sprawled in WOW! POW! font typically used to detail exploits of comic book heroes. Consider her hyperkinetic first single, “Drop It Low,” and its corresponding video, an over-the-top explosion of Technicolor, candy-coated youthful exuberance.

“I’m young and I’m fresh,” she exclaims. “My music is energy. It’s like a freaking wave. Whatever I come with, it’s full force. I should have been on Ritalin when I was younger.” Indeed, Ester proved she was a maverick early. Growing up in Muskogee, Oklahoma, she was influenced by her church-singing mom and the blues she played around the house. One day, Dean flipped through the Yellow Pages, looking for a studio.

“When a guy took my call, I blurted out, ‘I can sing’.” And she sang, over the phone. Soon, she was shuttling between school and the recording studio. By high school, she was singing and freestyling with local rappers. Soon, her ambition outgrew her surroundings, and she dropped out.

“I was getting in trouble. I wasn’t showing up. I would rather get money from a job, and my counselor said, ‘You should just quit.’ ”

Not exactly the advice you’d expect from guidance counselor, but it paid off: Dean got her GED and drove, alone, 18 hours to Atlanta. “Nobody could tell me nothing,” she says. “I had it already figured out.”

In no time, the ambitious girl with the raspy voice was writing for producers Chris “Tricky” Stewart and Jazze Pha (Girlicious’ “Like Me”), Ciara (“Never Ever”) and the Pussycat Dolls (“Whatcha Think About That”). Next, Polow Da Don put Dean on his Zone 4 label.

Now in Los Angeles, Dean is finishing her debut album.

“I’m free spirited,” she says. “I want to bring in new energy, and let people know to believe in yourself. And,” she says with a laugh, “to stay in school!”