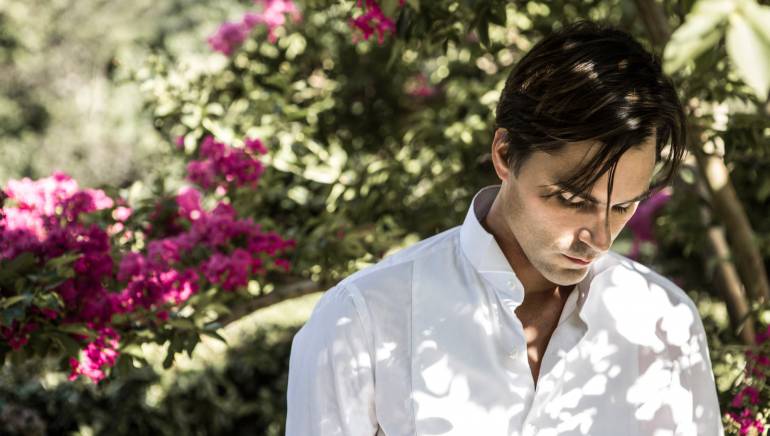 There’s a compelling narrative arc that has defined BMI singer-songwriter Diego García’s albums. His first release in 2011, Laura, was a frank album doused in heartbreak and lament named after a lost lover. But his new album, Paradise, led by the single, “Sunnier Days,” makes it clear that there has been a resolution to García’s predicaments. “The album feels stronger and I think it has a lot to do with the fact that my heart had healed and I was feeling complete,” García explains. “Laura was written from a place of weakness while [on Paradise] I had this amazing new band and I felt healthy, emotionally and professionally.”

It’s no surprise that García feels sunnier: he reconnected with the lover he had painfully lost and she’s now his wife, Brazilian fashion designer Laura García-Poretzky. They live in New York City and are the proud parents of a beautiful daughter, Georgiana. To say that their shared life is fabulous is an understatement (just ask Vogue magazine).

As for the new band he boasts of, it’s comprised of U.S.-based Argentine musicians, which makes perfect sense since García himself was raised by Argentine parents in Tampa, Florida. “It felt natural to channel my parents’ record collection,” he explains, citing the work of Latin crooners such as Piero, Julio Iglesias and Roberto Carlos as obvious influences. “I think as we get older we tend to realize how important our roots are – it’s healthy and vital to know where you’re coming from in order to know where you might be going,” García says. “When you’re young, you maybe take that for granted.”

Even though García is a fluent Spanish speaker, he had never felt the urge before to write lyrics in Spanish. But as he was writing Paradise it finally happened. “¿Donde Estás?” is the first of his songs to feature bilingual lyrics – he even asked his father to translate some verses, which you can hear toward the end of the track. “I didn’t force the Spanish thing – I think my music transcends language. At least I like to think so,” García explains. “Spanish started to creep up; I’m not sure why.” What matters ultimately, he says, is that singer-songwriters like Scott Walker and Neil Diamond, whom he was listening to just as much as their Spanish-speaking counterparts, are all coming from the same emotional place.

García kicked off a headlining tour in support of Paradise last month, and he and the band are sounding better than ever. “They are incredible musicians who know where I am coming from. And you’ll feel it live – the energy on stage is incredible,” he explains. “The record and the live show are now capturing that old rock and roll sound. And to do that with an all-Argentine band is extra special.”