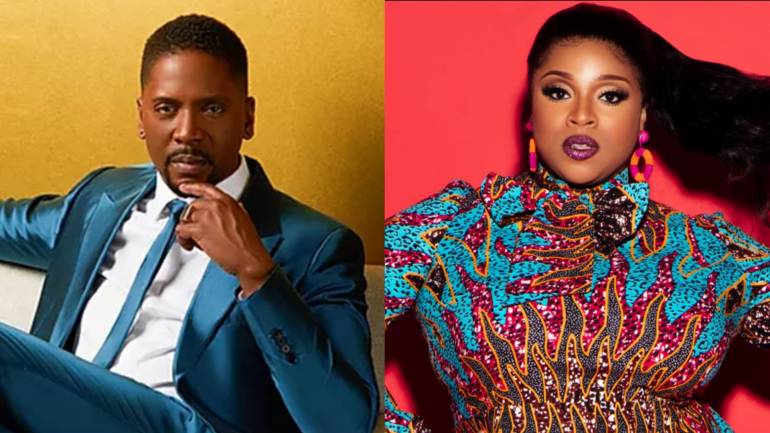 Earlier this week, the Lifetime network premiered its highly anticipated biopic, The Clark Sisters: First Ladies of Gospel, an ambitious telling of the story of one of Gospel music’s most enduring and iconic groups of all time. Featuring Aunjanue Ellis, Angela Birchett, Sheléa Frazier, Kierra Sheard and Raven Goodwin, the film includes this stellar cast doing all their own singing. Replicating the signature harmonies of Jacky, Denise, Twinkie, Dorinda and Karen Clark was no small feat, which was why storied BMI singer/songwriter/producer Donald Lawrence, who had previously collaborated with the Clark Sisters, was recruited as musical director. Since the film’s debut airing on Saturday night, The Clark Sisters: First Ladies of Gospel has become the highest-rated original movie on the Lifetime network since 2016, attracting 2.7 million viewers so far, and counting.

In the wake of this loving tribute to the legacy of the Clark Sisters, BMI reached out to Donald Lawrence and Kierra Sheard, who portrays her mother Karen Clark, to discuss this remarkable project.

How did you get involved with playing the role of Karen Clark?

Initially, to be honest, I wasn’t interested. However, I had some amazing individuals talk some sense into me. My parents told me, “This is a great opportunity that we don’t think you should pass up.” My manager, Dr. Holly Carter, reached out to me and mentioned an audition. The director Christine Swanson then reached out to me with directives and put me in contact with my acting coach, Jossie Harris. I prepped for the audition and I made it through!

The movie has become a huge hit on Lifetime. What’s the reaction been like?

2.7 million views and the highest ranked movie viewed on this network in the last 4 years. I am totally blown away and so humbled to have been apart of such a historical moment. I am beyond blessed and anxious to see the other opened doors that will come from this. God is so faithful. I have literally cried my eyes out for half of the day of the premiere.

Were you familiar with the music of the Clark Sisters growing up? What sort of impact did they have on you?

Absolutely! However, there were songs that Uncle Donald pulled out that I didn’t know. Once again he showed who’s the mastermind in all of this. The Clark Sisters have had a huge impact on me as a woman and as an artist. My Aunt Twinkie is a female vocalist, writer, AND musician who composed a huge catalog of music that has inspired people from all over. She has inspired me to perfect my craft and to dig deeper, inside myself, to find and cultivate the musical gifts inside of me. My mother is a vocal beast, writer, and musician also. Her range literally seems like it reaches heaven. While playing the role of my mother, my vocal range and ability has actually stretched. I could go on and on about who they have been to me. So, I’ll just say they’ve had a huge impact on me.

How did you feel portraying a member of the highest selling Gospel groups of all time? Was that intimidating at all? How did you approach the role?

I was nervous. I wondered if i could do it. It was definitely intimidating. These women are some of our favorite singers’ favorite singers. That’s a lot of pressure. It was also good pressure for me personally because I didn’t have the chance to just play the role of “some woman” but this woman was my mother, my best friend. The woman who raised me. I wanted to impress her. She has seen a lot. Hence, this was personal for me and I can often be hard on myself. So, I approached the role with an acting coach. I researched the role as if she wasn’t a woman I knew. I studied her voice and mannerisms on YouTube. I asked questions. Practiced in the mirror.

How demanding was the singing for this part?

It was very demanding. During one of the studio sessions, I literally had become lightheaded from trying to sing in a high register like KCS. I had gotten dizzy and admitted that I needed help with the soprano part.

The list of artists who’ve credited the Clark Sisters as an inspiration — both within the Gospel community and in the mainstream — reads like a who’s who. What made the Gospel Music of this particular group of women so special?

They didn’t only stick to a traditional sound of gospel music. When you listened to their music, some would ask, “Is this gospel?” They went outside of the box and took risks. Their vocal sound and approach displayed a mixture of sounds and genres. Their harmonies sounded like the mesh of chord from a piano, except it was with their voices. They were a female group that didn’t do the typical doo-wops. They could bring all 5 voices together to sing a whole verse and sound like it was all coming from one person. They were just brilliant, and sometimes the experience of hearing their voices simply cannot be explained.

What do you hope viewers take away from this biopic?

I hope viewers take away that there are not all hypocrites when it comes to living a life of faith. There are some who really mean what they sing and are aiming to live a life that matches what they sing about. I hope that the world sees the challenges and similarities that we share in our family to know that you don’t have to be perfect to go after a dream or to be a person of faith. Basically to not wait until things are perfect but to go for it all and let it work itself out. To also be okay with covering one another with love accountability. Restoration. Prayer. If you have a dream, go for it and let nothing stop you.

What role do you think Gospel music plays, especially during trying times like the ones we’re currently all living in?

It seems like gospel music would have a spike in its streams because it carries such an uplifting and inspiring message. The majority of the gospel music encourages the listener to know that they aren’t alone and that they can make it. This genre plays the role of a friend. It carries faith that challenges the listener to superimpose the visible with the invisible. Gospel music reminds us of the One who has the final say and reminds us of the blessings and promises of God. It’s necessary during these times. It can become a musical escape.

Tell us about being the musical director for a biopic about the Clark Sisters — an iconic name in Gospel music who you’ve personally worked with. Was it something you’ve always dreamt of doing?

As a teenager growing up, I was obsessed with The Clark Sisters, especially Twinkie. Her creativity as a musician and vocalist would leave you in awe - but her writing skillset, the content she chose to write about, the spiritual wisdom she shared, the visual lyrics and metaphors she wrote were all just so AMAZING.

Honestly, I would be happy to just say that I met The Clark Sisters, but to have worked with them and written songs for them is truly a dream come true. Especially helping them score their first Grammy wins with the One Last Time album.

As far as the movie, being able to take people back and make them feel what I felt as a teenager listening to the Clark Sisters was the goal. Looking back I now realize that I was born to do it. I knew what true fans would want to feel and I knew how to detail it and recreate it musically. I’m glad it came across so well on screen.

I understand the cast did all their own singing. Was there pressure to replicate the signature harmonies of the original material?

There was pressure because The Clark Sisters aren’t just another female group. Their vocal skillsets are some of the best on the planet. Originally, they were supposed to do their own vocals and the cast would lip sync, but Christine Swanson doesn’t like lip syncing and asked if I could get the cast to do the songs. I told her I’d do my best. Once I got started, I was determined to make the listener think it was the actual Clarks singing. The other pressure was I only had 2 weeks to arrange and record 14 songs, as well as teach 5 strangers to sing like the biggest female gospel group of all time - who also happened to be sisters, lol! Well I ended up finishing 2 days early…they couldn’t believe it!

The movie has become a massive hit for Lifetime. You must be very proud. What’s the reaction been like?

The reaction has left me speechless. The love I’ve received from other artists, industry execs and fans is unbelievable. They can’t believe I was able to duplicate that sound. Someone called me vocal magician, hahaha!

Well, prior to Covid-19, Broadway In Chicago was doing a world premiere of my latest GRAMMY-nominated album Goshen. It’s a concept musical that features Chicago’s legendary dance theater company, Deeply Rooted Dance Theater, that’s now going to be postponed until 2021.

What role has BMI played in your journey so far?

BMI has been such a supporter of my art. Mike, Catherine and Wardell have just shown me soooooo much love, as well as past president Del, who I love sooooo much. They’ve been great supporters of my songs as well as my art!