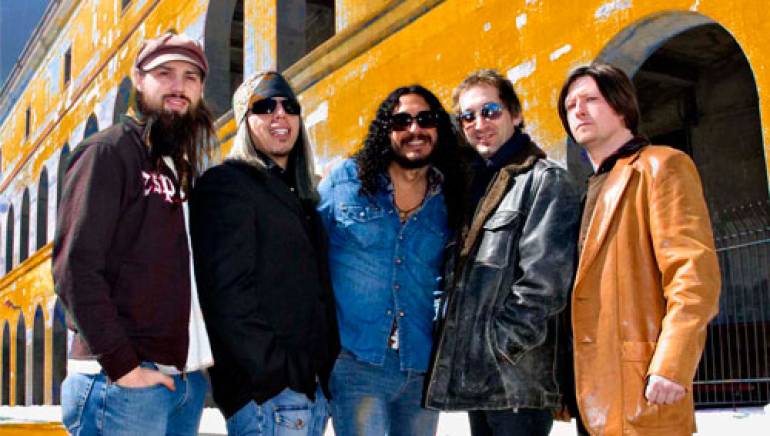 They hail from the coastal New Jersey stomping ground that spawned Bruce Springsteen & the E Street Band and Blues Traveler, two acts that experimented with Latin sounds on tracks like “Rosalita” and “Runaround.” Now, with the release of their new Adrenaline Records album On My Way, Garden State rockers deSol complete the circle begun by their forebears. Described as “rock ‘n’ roll with a Latin soul,” deSol seems destined to alter the perception — and the complexion — of Jersey rock.

As On My Way makes resolutely clear, Latin rock is no mere experiment for deSol. Featuring the talents of singer/songwriter Albie Monterrosa, Jams Guerrero (percussion, vocals), Andy Letke (keyboards), Chris Guice (bass), Kevin Ansell (guitars), Ron Shields (drums) and Ray Turull (percussion), On My Way seduces with its life-affirming tunes sung in English, Spanish and hybridized “Spanglish.” From the chanted choruses and Morse-code guitar riffs that animate the title track, to rousing numbers like “San Juan” and “Mona Lisa,” and ballads such as “Good Night Love” and “House of Texas,” On My Way triumphantly advances deSol’s south-of-the-border rock agenda while contemporizing the positive vibes of 1970s Top 40 radio.

Emerging in 2003 with their self-titled debut album, deSol captivated radio listeners from the start. Their premiere single, “Karma,” was a Top 5 Triple A radio hit. A holiday single, “Little Drummer Boy,” set a record as the highest debut chart entrance since James Taylor in 2004. Taking to the road, deSol opened for R.E.M., the Legendary Wailers and Los Lonely Boys, while performing a “buzzworthy” LA Times showcase at the 2005 South by Southwest festival.

Throughout their travels, the band won rave media notices. The Philadelphia Inquirer stated, “not since Los Lobos… has a Latin band sounded as fiery — and so ready to mess with tradition — as deSol.”

As evidenced by their recent single “Sing It All Night,” the Jersey band is biding their time until fortune inevitably comes knocking. As Monterrosa sings: “One day, gonna write the song that’s gonna keep ‘em cheering ‘til they turn out the lights/until then we’re troubadours chasing down a feeling, sending music into the night…”