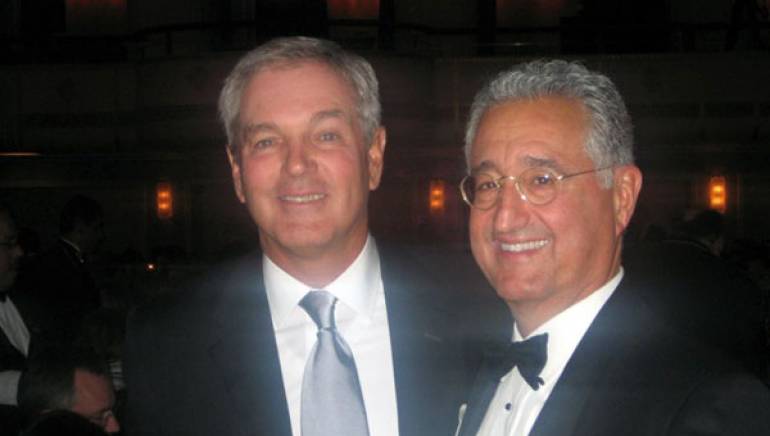 The Broadcasting & Cable Hall of Fame welcomed BMI President & CEO Del Bryant and BMI Board member Paul Karpowicz into its prestigious halls on Wednesday, October 27, 2010. New York’s Waldorf-Astoria played host to the 20th annual celebration, which honors the “pioneers, the innovators and the stars of the electronic arts.” Regis Philbin was master of ceremonies and sports announcer Jim Nanz stepped in as a guest presenter as industry leaders and legends filled the room to applaud the achievements of the 2010 inductees.

Karpowicz is President of Meredith Local Media Group. After learning he received the honor, he joked with writer Michael Malone that he is “way too young for it,” and then reflected, “These are people I have tremendous respect for, people who paved the way in the industry and have been involved in lots of important decisions about how our industry is run. I’d like to think I’ve contributed to that process, and hopefully I’m around for a while.”

BMI President & CEO Del Bryant assumed leadership of the performing right organization in 2004, succeeding Frances Preston. Bryant, who grew up in the music business and was immersed in the creative process as the son of legendary songwriters and publishers Boudleaux and Felice Bryant, joined BMI in Nashville in 1972 and served there in both the Writer/Publisher and Performing Rights departments. He has seen the company from every perspective as he has risen through the ranks.

Belo Corp. Senior Advisor and BMI Board Chairman Jack Sander offered thoughtful praise of Bryant, telling writer Rob Edelstein that the BMI President & CEO is “a tireless worker who really gets into the nittygritty of trying to be a very good representative for both the creators of music and the shareholders of BMI, which are the organizations-radio, television-which play that music.”

Read Edelstein’s entire in-depth look at Bryant’s career—and his passion for it.

For more information about the Broadcasting & Cable Hall of Fame, please visit www.broadcastingcable.com.