Posted in MusicWorld on June 27, 2011 by Ellen Mallernee 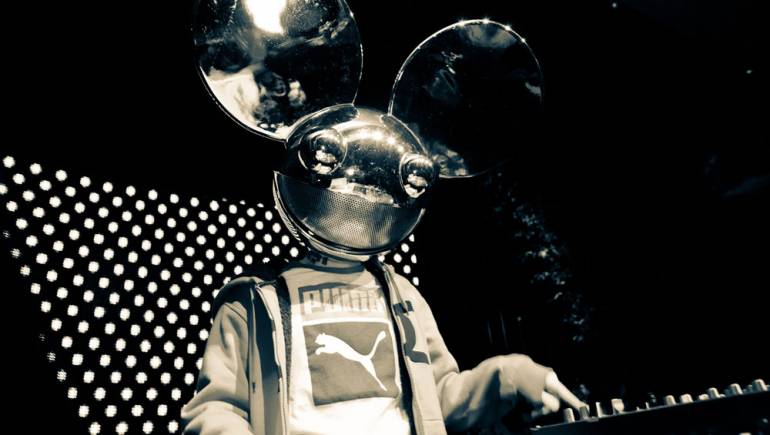 From atop a frenetically lit cube structure, Joel Zimmerman lords over a writhing crowd of hundreds of thousands. Performing as deadmau5 (pronounced “dead mouse”), the club-music superstar wears an enormous air-conditioned mouse helmet with LED lights that shift and shimmer in time with the house electronica he mixes, his long, lean arms manipulating computer software, twisting knobs and pushing buttons

This is an average night for Zimmerman, whose explosive new album 4X4=12 has made him into arguably the world’s foremost electronic artist. Among other high-profile achievements, deadmau5 served as house DJ at the 2010 MTV VMAs, which is where he also met his Playboy centerfold girlfriend Lindsey Gayle Evans. It’s a strange reality that’s become Zimmerman’s MO: the busty girlfriend, the cube, the mouse head — inspiring mousey merchandise galore — but most of all, the all-original, all-consuming beats.

deadmau5 picks up where ’90s electronica heroes Daft Punk and Paul Oakenfold left off. Edging electronica further into the mainstream, he is this decade’s dance music phenomenon, with a new, larger-than-ever demographic of fans. But rather than cutting and pasting other people’s beats together, as many of his counterparts do, deadmau5 cooks up most all his own material from scratch — at home, alone.

Therein lies a paradox: When Zimmerman’s not on-stage entertaining, he’s holed up in his $1.5 million Toronto penthouse, along with a collection of cutting-edge music and computer equipment, crumpled Coke cans and stubbed-out cigarettes, high-end furniture, and a beloved black-and-white cat named Professor Meowingtons. Eschewing a social life, the Ontario-born Zimmerman has made his penthouse the center of his universe. It’s where he plays house with Evans, devotes hours to geeky video and computer games, shoots YouTube videos starring his cat, and of course, makes music that’s 100 percent his own.