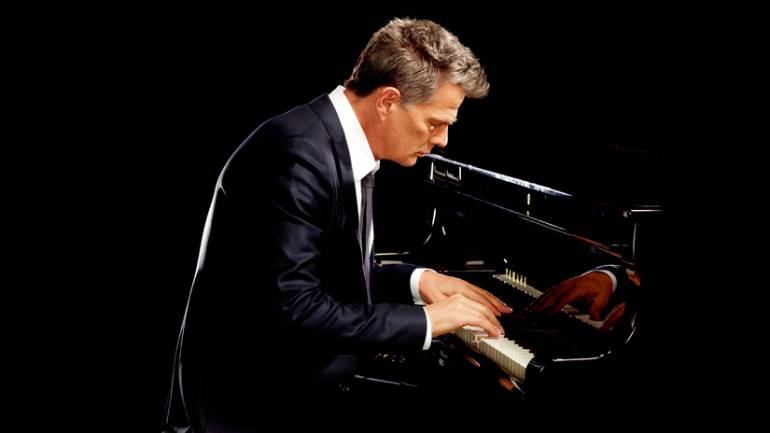 A consummate songwriter, producer, arranger, composer and recording artist of genuinely global renown, David Foster has led a career that has raised the bar and left an indelible impact on generations of music lovers and the music industry that spans decades.

In recognition of his multiple creative endeavors, David Foster has earned 47 GRAMMY nominations and won 16 GRAMMY Awards, an Emmy Award, a Golden Globe and three Oscar nominations for “Best Original Song.”  He has been inducted into the Songwriters Hall of Fame, received a star on the Hollywood Walk of Fame, and was named a BMI Icon in 2011. Foster has since taken on a new artistic discipline and has set his ambitious sights on conquering Broadway.

Were he not busy enough, Foster has also served as chairman for the Verve Music Group, and is a very active philanthropist, devoting time and funds to over 400 charities, as well as creating the David Foster Foundation, which provides financial support for Canadian families with children in need of life-saving organ transplants.

Most recently, however, he got back to basics. Re-entering the recording studio for his first solo album since 1994, Foster stripped away the lavish, hi-wattage pop production and lush orchestration that is frequently associated with his work for a simpler approach. The finished product, an elegant collection of songs called Eleven Words, is comprised simply of stirring piano melodies that resonate and speak to the core of Foster’s rich gift for music.

As he prepares to release this latest effort on April 3rd, the longtime BMI affiliate was generous enough to sit down and answer some questions for us about his musical journey, his aspirations and his creative process.

At what point did you realize that songwriting was your true calling?

I would say I was a little late coming to the songwriting party. I did some writing in my late teens, but the songs truly were awful, so I didn’t really attack it again until my mid -twenties. Then, it became an obsession which has stayed with me until this day.

You’ve been characteristically busy since your last studio album several years back. Prior to entering the studio for Eleven Words, how did the inspiration for this record come to you? After so much time producing other artists and working on other projects, what was your mindset for this new solo work?

Inspiration is such a tricky word. I have always looked at songwriting like a job — a great job but a job. You plan to work with someone, you show up, you spend a few hours together, and if you’re lucky, you find some magic. I’m sure a lot of my fellow BMI writers can relate to that. Now with my album, Eleven Words, it was kind of the same process, except I was by myself, and I truly think a wave of real inspiration came over me. I identified eleven words that I thought were most meaningful and that the world would identify with, and then I went to the piano every morning, stared at the word, and waited to see what happened. It was almost as though I had gone back to those early days of my songwriting. No rules. No one around. No one to answer to, and no one to please except myself. It’s really great when you have the luxury to do something for joy instead of commerce.

What is the significance of the album title, Eleven Words?

I don’t really know except I used eleven words to motivate me to find the words I needed — elegance, love, everlasting, victorious, etc. — using each letter of the album title to find just the right word. It doesn’t really make sense, but the words truly were my co-writers (I made sure they signed with BMI!).

Please speak a little bit about your creative process. Has it changed over time?

My creative process has pretty much stayed the same over the years. Of course, you have to adapt, but I think the key is always try and retreat and attack in another direction if things aren’t working. if you can’t write a top 40 song on a given day, try something else. Stay in your lane, of course, but experiment. It’s helped me a lot over the years.

Do you ever grapple with writer’s block? How do you get around it?

Writer’s block is such a real thing and, of course, I have had it many times. But, I wonder if maybe it should be called laziness instead. Songwriting is not a hobby, for most of us, and it’s no joke. I love the phase “good is the enemy of great.” For so many songwriters, it’s so easy to be good.  But to try and be great is a whole other ballgame.  I try to be great every day, but, sadly, most days I fail. But when those rare moments come along where you are hitting greatness (even if just self-perceived), there is just no feeling like it.

You’ve worked with everyone from Alice Cooper and The Tubes through Barbra Streisand and Madonna …is there any single artist you’re still hoping to collaborate with?

Well, I’ve said it so many times, if he’s ever read it, I’m sure it just annoys him but yes, it’s STING. I just think he is amazing and I think we could really do something “great” together.  The truth is, he really doesn’t need me—and, at this point, I only like to go where I actually think I can help and contribute.  The funny thing is we are solid acquaintances, and he knows how I feel. We’ve done a few charities together, and he blows my mind every time. We even got up at a wedding and did “My Funny Valentine” together with Chris Botti ( who I love!), so, I guess, its just not meant to be.

You’ve produced, composed, arranged and written—- in which discipline do you feel much comfortable?

Well, I am a bit of control freak ( hard to admit, but true).  So, based on that, probably producing is my favorite thing to do, because you really do get to be the guy where “the buck stops.” Having said that, when I go to the doctor’s office, when I’m filling out the form, for occupation, I still put “musician.”  Maybe that’s my favorite!

What’s been the secret to your longevity as a music creator?

I think I said it before, and thanks for asking, even though I’m not sure, sometimes, where I stand, as far as longevity goes in this ever-changing business. “Retreat and attack in another direction” — you have to be prepared for the day when your relevance is questioned. The folks that aren’t so smart about it keep banging their heads against the brick wall. Now what I’ve chosen to do is walk around the wall and try something different. As an example, when relevance hit me around the year 2000, I went out and found Michael Bublé and Josh Groban and worked with Andrea Bocelli. They aren’t top 40 artists, but we had so much success together — with radio play and sales — so, I will say it one more time, “retreat and attack in another direction.”

You’ve achieved many prestigious accolades for your music – what keeps you inspired? What do you feel you have yet to accomplish?

Broadway has my full attention, now. I’m working on three projects but, to be fair, I can call them musicals, but not Broadway musicals because…well, they are not on Broadway, yet. But it’s going well. The thing that I love about Broadway is that you are not restricted by any musical genre or any radio play. The thing I don’t like is that it’s a highly collaborative process, and — like I admitted before — I like to be in control. With musicals, that’s just not possible But, I’m adapting, with a little kicking and screaming.

How has the experience of branching into this new creative discipline challenged you?

I’m so into it, but the process is so long that it gets really frustrating. Also, I am performing a lot live, now. For so many decades, I made music, and then the artist got to go out and enjoy singing and playing to audiences and getting that immediate feedback. There’s a lot of joy in that, and I’ve found that if I have really great singers with me, the audience doesn’t mind that it’s not Celine or Whitney or Bocelli or Bublé or Chicago. It’s a great feeling to connect with a live audience. I really love it.

What role has BMI played in your remarkable career?

BMI is family to me. I can’t even tell you how many times they have been there for me — they are so involved. They are so in your corner, they are so encouraging and they treat each and every songwriter equally, no matter what part of their career they are in. Think about that. Who else do you know that does that? No one that I can think of. They are the great equalizer. It sounds funny to say, but they are like the parents you always wished you had, and they are also the friend you always wish you had. I love BMI, and all that they have done for me. But, maybe more importantly, all that they have done for literally thousands of writers. To them, the writer is king. That’s their message to the world. It doesn’t matter whether that’s accurate or not— that’s BMI’s mantra and lucky us!

Log in with your Pandora account to check out David Foster’s Pandora Story, where he shares stories behind some of his new hit songs from Eleven Words that you can also listen to here.