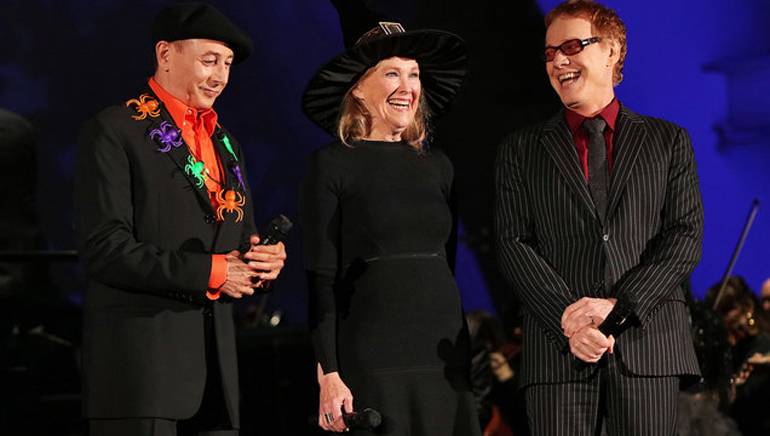 Paul Reubens, Catherine O’Hara and Danny Elfman each gave enchanting performances in their iconic roles during the live to picture concert of Tim Burton’s “The Nightmare Before Christmas” at the Hollywood Bowl in Los Angeles. Photo by Randall Michelson.

The Hollywood Bowl once again welcomed Halloween with Tim Burton’s 1993 masterpiece The Nightmare Before Christmas, featuring three performances of the classic film accompanied by live orchestral performances of BMI composer Danny Elfman’s iconic score last weekend. Conducted by John Mauceri, Elfman’s music further delighted audiences with reprise performances by the film’s original vocalists, which included the GRAMMY-winning composer himself, with a dynamic performance of Jack Skellington, as well as equally memorable performances by Paul Reubens, as the voice of Lock, Catherine O’Hara as Sally, and Ken Page as Oogie Boogie. Playing the role of MC for the performances was Greg Proops, who was also a voice in the original feature.

In addition to these stunning performances, as a post-show treat on the nights of tricks, Elfman, who is also a four-time Academy Award nominee, performed his Oingo Boingo hit “Dead Man’s Party” with guitarist Steve Bartek.