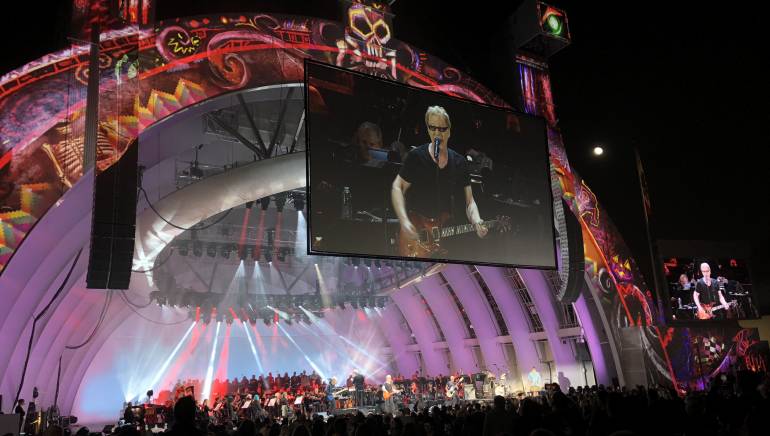 Elfman straps on his guitar for a performance of “Dead Man’s Party” with Oingo Boingo.

Just in time for Halloween, celebrated BMI film composer and Richard Kirk Award recipient Danny Elfman brought to life his score to Tim Burton’s The Nightmare Before Christmas for three nights at Los Angeles’ historic Hollywood Bowl. Conductor John Mauceri led the L.A. Philharmonic live to the beloved Disney motion picture in honor of its 25-year anniversary. Elfman assumed the singing voice of protagonist Jack Skellington for classic numbers he wrote from the film like “This is Halloween,” “What’s This?” and “Making Christmas,” with Catherine O’Hara providing the voice of Sally and Ken Page in the role of Oogie Boogie for Saturday night’s sold-out performance. In the spirit of both the movie and the holiday it celebrates, the evening kicked off with a costume contest, and featured a surprise cameo performance from Paul “Pee Wee Herman” Reubens. As a special show-closing encore, Elfman reconvened his iconic New Wave band, Oingo Boingo, for a suitably spooky rendition of “Dead Man’s Party.”