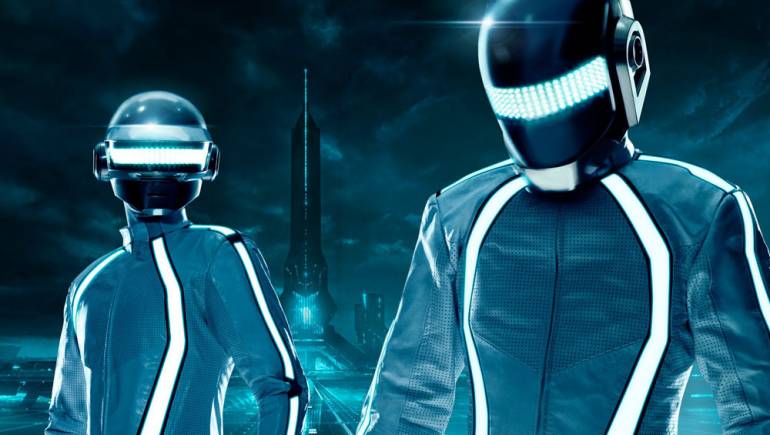 If anything, Daft Punk’s Grammy-winning original songs have earned world renown for their crafty contemporizing of ’70s dance styles like disco and funk. The group’s 2007 “Alive” tour helped cement their reputation for over-the-top staginess, with their beat-intensive music complemented by props like a pyramid, LED costumes and laser lighting. Daft Punk singles, including “Da Funk” (1996), “Around the World” (1997), “One More Time” (2000) and “Harder, Better, Faster, Stronger” (2001), are considered international dance classics. The duo’s songs and albums appear to be full of winking inside jokes. Daft Punk’s 1996 breakthrough album was titled Homework (a reference to their house music roots, perhaps?). Their 2001 follow-up album is titled Discovery (“disco-very”—get it?).

Yet for all their global renown, most fans probably couldn’t identify Bangalter and de Homem-Christo in a police line-up. Forswearing celebrity, the duo always appears in public wearing ornate robot costumes, including metal-plated helmets that conceal their faces.

To illustrate Daft Punk’s reputation for creating intelligent dance music, one need look no further than the duo’s score to the 2010 science fiction thriller Tron: Legacy. Apparently knowing that they needed an impeccably credentialed musical group to help generate buzz for their movie, Tron: Legacy producers left nothing to chance, selecting Daft Punk to supply the film’s futuristic score.

It proved to be a sound business decision. The score, which features the duo performing with a massive orchestra, has been hailed as a triumphant reconciliation of classical-styled symphonic music and contemporary electronic sounds. Daft Punk’s score was arranged and orchestrated by Joseph Trapanese, who stated early in the planning process that he is a reverent Daft Punk fan. Bangalter and de Homem-Christo collaborated with Trapanese for two years on the score, from pre-production to completion.

For Bangalter and de Homem-Christo, “Tron” meant working far outside their comfort zone. “This project is by far the most challenging and complex thing we have ever been involved with,” Bangalter told Fact Magazine. “Coming from our background of making electronic music in a small bedroom, and ending up having our music performed by a 90-piece orchestra, with some of the best musicians in the world … We are lucky to have had the opportunity to experience some powerful moments artistically over the years, but recording this orchestra was a very intense experience.”

Hailing from Paris, France, Daft Punk began life in the late ’80s as a trio named Darlin’. The group was inspired to change their name after a negative review referred to their music as “a bunch of daft punk.” Trimming down to a duo, Daft Punk eventually became a vital part of the French progressive music scene, which includes acts like Air and Dimitri from Paris. But Daft Punk rocketed to the forefront of the Gallic pop movement by appropriating their acid house and techno influences, and incorporating disarming elements of pop, indie rock and hip-hop.

The group broke internationally in 1996 with their burbling house hit, “Da Funk.” Today, the song and its Spike Jonze-directed music video are considered classics of the 1990s electronic dance-music genre. In September 2010 Pitchfork Media included the song at number 18 on their Top 200 Tracks of the ’90s.

Like Radiohead and Nine Inch Nails, Daft Punk’s wide-ranging creative ambitions have spawned a series of much-talked about multimedia projects. Their sensational live performances aside, Bangalter and de Homem-Christo are reputed for creating music videos that incorporate animation and film short conceptualism.

The legendary clip for “Da Funk” follows the woebegone exploits of a man-sized dog. Directed by Spike Jonze (Being John Malkovich, Adaptation), the “Da Funk” clip makes subtle statements about alienation in modern life, but Bangalter and de Homem-Christo dismiss such interpretations out of hand.

“There’s no story,” Bangalter said in 1997. “It is just a man-dog walking with a ghetto-blaster in New York.”