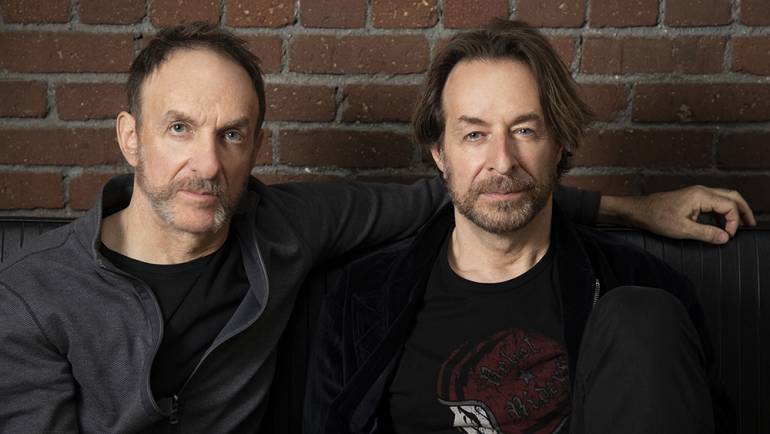 Animation provides the opportunity for viewers to suspend reality. By choosing to watch an animated film, you open yourself to the idea that anything can happen, and good animation can make you feel a deep emotional connection to the characters, and to the overall story. With the limitless range of visual effects the medium offers, scoring an animated film provides composers the opportunity to truly stretch the boundaries of their own imaginations, creating an incredible experience for viewers.

For writer/director Dan Scanlon’s urban fantasy Onward (Pixar Animation Studios for Walt Disney Pictures, opening March 6, 2020 in the U.S.), composers Mychael and Jeff Danna were tasked with creating a magical score around the story of two teenaged elves, brothers Ian and Barley, who embark upon an emotional quest to spend one day with their late father. The Dannas’ score not only encapsulated Ian and Barley’s world, which is filled with creatures you’d expect in fantasy fiction — centaurs, cyclops, satyrs, unicorns — but also embodied the emotional highs and lows of this poignant journey.

For brothers Mychael and Jeff, frequent collaborators and renowned film and television composers with Oscar wins, GRAMMY nominations and Golden Globe nods, this story hit close to home, enabling them to fully connect with the main characters and translate their complex emotions into a fantastical score. We talked to the Dannas about what purpose a score should serve for a film, how they started their respective careers in the industry, and how they approach the scoring process.

When you first met with Onward writer/director Dan Scanlon, you both felt an immediate connection to this story. Can you explain why?

Mychael: Yes we did, and in a multitude of ways. Onward is a story about two brothers who go on an epic quest to find out more about the father they lost when they were young. Dan Scanlon pulled this from his own family experiences. In our first meeting, we came in knowing nothing at all about the film. Dan started to tell us the story, and Jeff and I looked at each other, wondering if it was some sort of weird prank. Two brothers that are 19 and 16, who lost their accountant father when they were young; Jeff and I were 19 and 13 when our (accountant) father died. The story that follows is set in a world that is very familiar to us.

When we were teenagers in the ‘70s, fantasy was all the rage. Teens read the Lord of the Rings, we each did at least twice in high school, [and] the artwork was everywhere, including airbrushed vans and progressive rock album covers. Jeff and I played in bands as kids, he a guitarist and me a synth/Mellotron/piano player. So, this modern mashup of a fantasy world that has ‘evolved’ into our modern world of cell phones, high schools and fast food — yet populated with trolls, elves and unicorns — was something we got right away, and found very inspiring musically, since those fantasy progressive rock movements were part of our early musical background.

Sitting across from Dan, who, with his brother, went through this same loss as we did, and the ensuing search for who your dad was as a person was something that immediately connected us to him and to the story.

Mychael, you’ve said that as a composer, you have to understand and relate to the emotion of the characters and empathize with them. For both of you, does that feel different when you’re working on an animated film?

Jeff: The process is the same, indeed more so with animation, where the music has its heaviest burden of breathing life into the film. As we mentioned, our connection to the characters in this particular film was immediate and particularly visceral given our circumstances growing up. I believe music is integral in making the audience care about the characters and what happens to them, especially in a story that wears its heart on its sleeve like Onward does.

In your words, what you do you think is the purpose of a score for a film or television project? How do you fulfill that purpose?

Mychael: It’s simple, in concept anyway! The story drives everything. Every decision, from what instrument to use, tempo, mode, even what note comes next — all those questions have their answers in the story. The overall role of the music is to help tell the story in a way that’s appropriate to that story. Of course that means that every project is a different puzzle with different solutions. It also means you need to have a profound understanding of the story and themes before you begin to write.  Sometimes the score should be abrasive and shocking, sometimes utterly invisible, sometimes melodic, and sometimes more like sound design.

The first discussions with the director are about the story, the themes, the reason they were drawn to telling this story in the first place. Then, the question of what role music has and what world it will inhabit. We think it’s vital to understand all these concepts before you write a note of music. Then, once you begin to sketch, we play it down for the director and just go back and forth with revisions, and finetune the concepts and musical material as you go.

Pictured are producer Kori Rae, composers Mychael and Jeff Danna, and director/writer Dan Scanlon at the scoring session for Disney and Pixar’s “Onward,” which opens in theaters on March 6. Photo: © Disney

How does the score you both wrote for Onward exemplify the “big quest” theme of this animated film? It seems like magic, which is a key part of the story, could take composing in many different directions. How did you interpret the magical and fantasy elements through your composition?

Jeff: We started with conceiving a palette that would include many of the instruments one would associate with fairytales and fantasy stories. It included many of the folky guitars that I play — bouzouki, cuatro, tambura, tiple, dulcimer, lute — as well as early music instruments like psaltery, viola da gamba, vielle, recorder, folk harp, etc.

For the magic theme itself, which was something we knew would be a cornerstone of the score, we used four notes from the whole-tone scale that seemed to evoke the ancient power of old magic and bursts into the film at our first glimpse of the landscape of Onward. Additionally, we knew that Ian would need a strong theme that would follow the considerable arc of his character, from timid young teenager to triumphant young man. The quest also had its own theme that we drew from the music we wrote for Barley’s van, Guinevere, that also graduated from something simple to something large and sweeping.

Tell us a little about your backgrounds in music. How did each of you first start playing and composing music, and how did you build your passion for music into a career?

Jeff: Growing up in our musical household, we were both thrust into piano lessons at an early age, though Myke got the good piano teacher and I got the prickly one. Soon enough, I hated music and gave up on the piano, until I started hearing the sounds of [The Who’s] Quadrophenia coming through my brother’s door and discovered that the electric guitar was going to be the salvation of my childhood. Attempts at being a rock star were not quite gelling when I injured my hands and had to stop playing live. Right about that time, Mychael needed some guitar work done on his first few film scores and here we are now, all these years later.

Mychael took a more traditional route, combining further studies and even a position as a church organist with his rock and roll cred, finishing up at the University of Toronto and diving into the Toronto film music scene of the 1980s.

Mychael: I think anyone who has a sibling will know the answer to this. You grow up with each other in the same set of experiences and in the same cultural setting. That gives you a common language, a set of common signposts you can refer to in shorthand and, maybe most important, a trust in the other guy’s taste and ability to criticize your work in a constructive and helpful way.

Film composers are collaborators from the time they start. Anyone who can’t work with others won’t be doing this for long. So, we are able to put aside our egos — at least, most of the time — and put the music first. Within all the things we have in common, we are still quite different writers and have different areas of expertise. So there is a real strength in the things we work together on. We both share a common work ethic and a desire for the music to be the absolute best it can be, so that always comes first before anything else. Sometimes we disagree, and sometimes passionately because we both get obsessed with what we are doing, but it’s never personal, and we have always managed to find a solution where both guys are happy with our final result.

How did you start working with BMI, and how has it impacted your career?

Mychael: It’s a very familiar BMI story, I think! I had a career in Canada for a few years, but then I met Doreen [Ringer-Ross, Vice President of Creative Relations for BMI] early in my American career. Her immediate support and love were incredibly helpful and affirming. She gave me the confidence and pointers that a mentor would, since I did not grow up with one in my film music career, and then those BMI checks gave me the financial ability to continue working to the best of my ability!