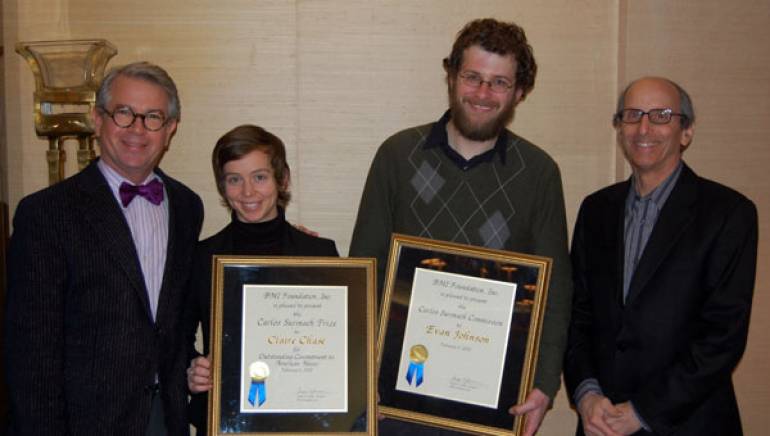 BMI Foundation President Ralph N. Jackson has announced that flutist Claire Chase is the recipient of the Carlos Surinach Prize, given to an emerging artist in recognition of “outstanding commitment to American music,” and composer Evan Johnson is the winner of the Carlos Surinach Commission. Established by a generous bequest from late BMI classical composer Carlos Surinach, these awards are given in cooperation with the Concert Artists Guild (CAG), a non-profit organization whose mission is to discover, nurture and promote young musicians.

In making the announcement, Jackson said: “This is a unique program which identifies a young performer who has shown a true dedication to American music, and then in turn, allows that performer to choose an emerging composer who will create a new work written specifically for the performer to premiere.” Performers are selected annually from the prestigious roster of CAG’s international competition winners and the composer is chosen from a pool recent BMI Student Composer Award winners.

Claire Chase, flutist, praised recently in the Chicago Tribune as “a virtuoso of amazing dexterity and sensitivity,” founded the International Contemporary Ensemble in 2001 and has served as ICE’s executive director since its inception. Over the past eight years Ms. Chase has played and produced more than 300 concerts of new music with the ensemble on three continents, and she has been featured on critically acclaimed releases from the Naxos, Tzadik and Bridge labels. In 2008 Ms. Chase took First Prize in the Concert Artists Guild International Competition, and will make her Weill Recital Hall debut on April 22, 2010. A passionate advocate of new music for the flute, Claire has given over 100 premieres to date. She released her debut solo album in October 2009 on the New Focus label featuring world premiere works for solo flute by emerging composers. The recording was named one of the Top Ten Classical Albums of 2009 by TimeOut Chicago. More information is available at www.clairechase.net.

Evan Johnson (b. 1980) is a composer whose works are being commissioned and programmed with increasing frequency by prominent soloists and ensembles throughout the USA, Europe, and beyond. The recipient of numerous prizes, awards and fellowships — including a BMI Student Composer Award, the Bearns Prize, and grants and fellowships from the Rhode Island State Council for the Arts and the Rhode Island Foundation — Johnson received his doctorate at SUNY Buffalo under David Felder after undergraduate work at Yale University. Current and forthcoming projects include new works for clarinetist Gareth Davis, the ELISION Ensemble, and pianist Ian Pace. For his Surinach Commission, he will compose a solo flute work to be premiered by Chase in the 2010-11 season. Johnson currently teaches at Northeastern University in Boston, MA.