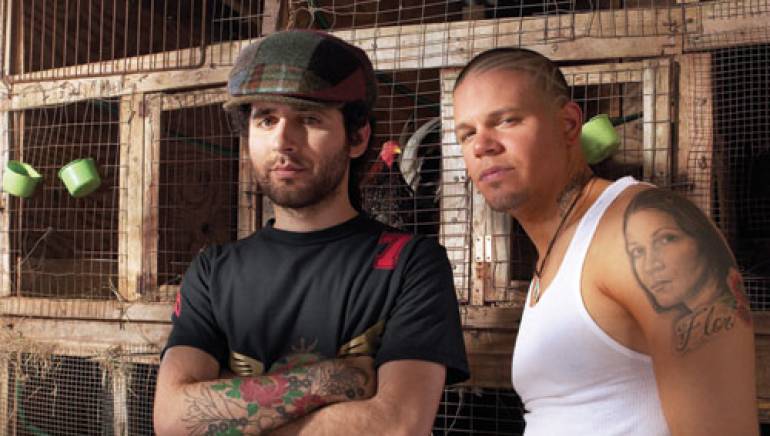 Three-time Latin Grammy Award-winning and Grammy Award-nominated Puerto Rican hip-hop and alternative-reggaetón duo Calle 13 displays the electrifying synergy of two stepbrothers, Rene Perez Joglar (Residente) and Eduardo Jose Cabra Martinez (Visitante). Belying his fierce, tattooed visage, Residente has a degree in arts and a Master of Fine Arts in computer animation from Savannah College of Art and Design in Georgia. Visitante, who also has a degree in arts and is an accomplished painter, chose the name Visitante because that’s how he had to identify himself as a “visitor” whenever he went to visit his half-brother on 13th Street — Calle 13 — in the El Conquistador subsection of Trujillo Alto, Puerto Rico.

In 2005, two back-to-back hits on local radio stations, “Se Vale Tó-Tó” and “Atrevete-te-te!,” propelled the pair further into the public consciousness, as did collaborations with other artists, notably Voltio for the song “Ojalai” (also known as “Chulin Culin Chunfly”) and remixes with Three 6 Mafia. At the end of 2005, they finally released their self-titled album, which was lauded as a benchmark in Puerto Rico’s rich musical history. In 2006, the band won three Latin Grammys (Best New Artist, Best Urban Album, and Best Short Version Video, for the song “Atrevete-te-Te!”) and in 2006 and 2007, Calle 13 continued collaborating with a diverse slate of international artists, including Nelly Furtado (Canada) and superstar Alejandro Sanz (Spain.)

These imaginative pairings continue on their just-released second album, Residente o Visitante, as they are joined by such diverse guests as the Cuban group Orishas, Argentinean Vicentico (from Los Fabulosos Cadillacs), and La Mala Rodríguez from Spain in the mix.

Although originally grouped under the reggaetón banner, Calle 13 has far exceeded the definitions of that genre with cumbia, salsa, and even bossa nova. Their lyrics are alternately funny and acerbic, greased with the oil of pure shock value. When they exhort their fans to “turn up the volume on satanic music,” in the chorus for the new single “El Tango del Pecado” (The Tango of Sins), they may be kidding, but it’s proof that the duo doesn’t intend to veer away from the serrated edges. The song, a collaboration with Oscar-winning Argentinean producer Gustavo Santaolalla, is a pointed reference to René (Residente) Pérez’s controversial relationship with the wholesome former Miss Universe Denise Quiñone. “”I want people to think, to question things,” Residente says. “The reality is that we have to record commercial songs, but we put a little sting into them.”