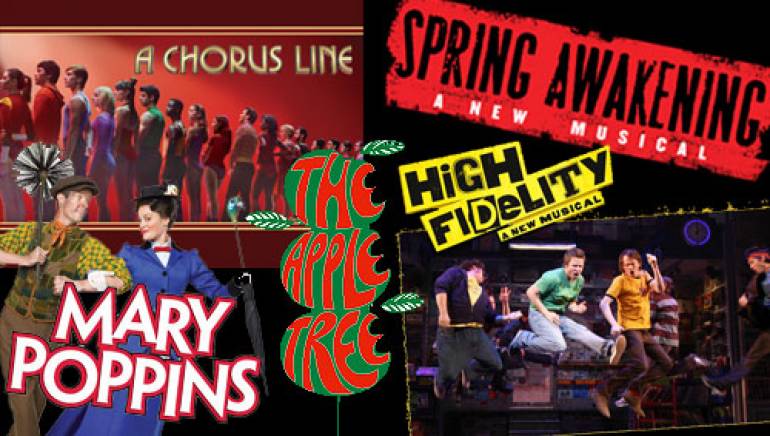 The current Broadway season has theatre-goers scrambling for seats to shows from BMI’s ever-growing list of writers from the Tony-honored BMI Lehman Engel Musical Theatre Workshop.

A CHORUS LINE
A revival of A Chorus Line opened Oct. 5, 2006, at the Schoenfeld Theatre in New York. The ground-breaking and record-breaking musical features lyrics by BMI writer Edward Kleban, who won the 1975 Tony, Drama Desk, Olivier Awards and the Pulitzer Prize in Music for the show’s lyrics. Kleban was a member of the BMI Lehman Engel Musical Workshop for over 20 years.

A Chorus Line begins on a bare stage, where casting for a new Broadway musical is almost complete. The competition has been narrowed down to just 17 dancers. During the show we find out the dancers’ dreams and disappointments. By the show’s finale, the final chorus line of eight is chosen.

In 2001, a musical biography of Kleban, A Class Act, was produced on Broadway. The show features Kleban’s music and lyrics and has scenes set in the BMI Workshop. Mr. Kleban, who died in 1987 at the age of 48, posthumously won an Obie for his score for A Class Act, and was nominated for a Tony and a Drama Desk Award. Linda Kline, Kleban’s literary executor and a BMI Workshop member, is co-writer. The Kleban Foundation, created according to his will, awards grants to aspiring theatre lyricists and bookwriters so that they may carry on the tradition of the American musical theatre, which he loved so dearly.

Joel Siegel of ABC-TV wrote, “This proves you can be a singular sensation twice. The choreography, the staging, the set and the score are still magic. You’ll dance out humming the score. The music moved me to tears twice. And something I’ve never done, during the finale, I whispered wow under my breath.”

Michael Sommers of the Star-Ledger wrote, “Welcome back, you beautiful thing! The show glows with dynamic and dazzling songs by composer Marvin Hamlisch and lyricist Edward Kleban,” and Joe Dziemianowicz of the Daily News asserted, “There’s nothing better. The score sounds fantastic, too. As long as ‘A Chorus Line’ is kicking on Broadway, audiences have somewhere exciting to go.”

Mary Poppins marks the first collaboration between Disney, producer of the The Lion King (BMI’s Elton John and Tim Rice) and Beauty and the Beast (BMI’s Alan Menken) with Cameron Mackintosh, legendary producer of the record-breaking Phantom of the Opera, Cats and Les Miserables. The Cameron MackIntosh Foundation provides underwriting for the annual BMI Workshop Musical Theatre Showcase at Manhattan Theatre Club.

Mary Poppins, with classic songs by Richard M. Sherman and Robert B. Sherman, and new songs by George Stiles and Anthony Drewe, opened Nov. 16, 2006, at the historic New Amsterdam Theatre in New York.

The Sherman Brothers are leading composer/lyricists in family entertainment. Among their many hits is the most translated and performed song on earth: “It’s a Small World (After All).” Robert Sherman endows the BMI Foundation’s Robert B. Sherman Scholarship, which is given annually to a college student who is a musical theatre composer/lyricist.

The Shermans’ career spans almost 50 years and includes two Academy Awards for Best Score and Best Song for “Chim Chim Cher-ee” from Mary Poppins. Their other Broadway credits include Chitty Chitty Bang Bang and Over Here, which is being prepared for a lavish West End revival.

Additional songs are by composer/lyricists George Stiles and Anthony Drewe, Olivier Award winners for the musical Honk and founders of London’s Mercury Musicals.

Michael Kuchwara of the Associated Press wrote, “All the big, classic Sherman Brothers songs are here, and new songs by George Stiles and Anthony Drewe fit seamlessly into the proceedings. In fact, one or two of them, including Mary’s opening number, ‘Practically Perfect,’ possess an instant hypnotic quality.”

Terry Teachout wrote in The Wall Street Journal, “I’ll be surprised if it doesn’t run for at least a century!”

SPRING AWAKENING
Based on the scandalous 1891 play about troubled teens, Spring Awakening opened off-Broadway last summer and opened at the Eugene O’Neill Theatre on Dec. 10, 2006. This ground-breaking show is by BMI writers Duncan Sheik (music) and Steven Sater (book and lyrics).

Christopher Isherwood of the The New York Times called Sheik and Sater’s score “ravishing” and declared that “Broadway would never be the same. The music, spare in its simple orchestrations, lush in the lapping reach of its seductive choruses, embodies the shadowy air of longing that infuses the show, the excitement shading into fear, the joy that comes with a chaser of despair. The singing throughout is impassioned and affecting, giving powerful voice to the blend of melancholy and hope in the songs.”

Grammy Award-nominated singer/songwriter Duncan Sheik’s self-titled debut album, both a popular and critical success, introduced the hit singles “Barely Breathing” and “She Runs Away,” and spent 30 weeks on the Billboard 200. Other albums include Humming, Daylight, Phantom Moon with lyrics by Steven Sater and his latest, White Limousine.

Sheik’s film soundtracks include Great Expectations, The Saint, Teaching Mrs. Tingle, Three to Tango, What a Girl Wants, Transamerica and A Body Goes Down. Sheik and Sater recently wrote original songs for the feature film A Home at the End of the World. For the stage, their Nightingale workshopped both at the O’Neill Musical Theatre Conference and La Jolla Playhouse, and is announced for La Jolla’s 2007 season.

Sater’s plays include the long-running Carbondale Dreams, Perfect for You and Doll (Rosenthal Prize, Cincinnati Playhouse).

HIGH FIDELITY
The romantic musical comedy High Fidelity follows the adventures of Rob, a record store owner who knows almost everything about pop music, but almost nothing about how to hang on to a girlfriend. This new musical adaptation of Nick Hornby’s best-selling novel marks the first-time collaboration of fast-rising songwriters Tom Kitt and Amanda Green (daughter of actress Phyllis Newman and legendary Broadway lyricist Adolph Green) and book writer David Lindsay-Abaire (a Tony nominee last season for his play Rabbit Hole).

Kitt and Green first met and collaborated in 2006 in the BMI Musical Theatre Workshop, and songs from High Fidelity have been featured in BMI Workshop showcases. Tom’s work has been heard in film (The Two Ninas), television (Dawson’s Creek), and original recordings (Julia Murney, The Tom Kitt Band). Amanda’s shows include Hallelujah Baby (Arena Stage 2004; additional lyrics) directed by Arthur Laurents, For The Love of Tiffany (NY Fringe Festival 2003) and Up the Week Without a Paddle (L.A. Drama Critics Circle nomination, Garland Award, Best Score).

Frank Rizzo in Variety wrote, “This is a musical that celebrates the power of pop culture with wit, verve and a killer beat. Nailing the music in all its varied forms is Tom Kitt’s tuneful score and the sharp, funny and telling lyrics of Amanda Green.”

Terry Teachout proclaimed Green “a master of the craft of packing everything you need to know about a character into a neatly wrapped, deftly rhymed package.”

The Philadelphia Enquirer calls the musical numbers the show’s “mother lode. Act II bubbles over with so many show-stealers that you begin to wonder whether it has anything left to plunder. Indeed, it keeps bringing out the treasure.”

And Entertainment Weekly declared that High Fidelity is “the unique show that charms both your college drinking buddy and your mother.”

THE APPLE TREE
A revival of The Apple Tree, which opened Dec. 14, 2006, at the Roundabout’s Studio 54 Theatre, features a score by BMI writers Jerry Bock (music) and Sheldon Harnick (lyrics). The original production, which opened at the Shubert Theatre in 1966, was nominated for seven Tony Awards, including Best Musical. Bock and Harnick are the Pulitzer- and Tony Award-winning writing team responsible for Fiddler on the Roof, She Loves Me, The Rothschilds and Fiorello.

The Apple Tree contains three short musicals, all pertaining to the subject of temptation. The first is based on Mark Twain’s interpretation of Adam and Eve, the second, Frank Stockton’s classic fable of The Lady or the Tiger, and the third, Passionella, Jules Pfeiffer’s delicious look at a chimney sweep who is transformed into a glamorous movie star.

Composer Jerry Bock personally selects and endows the BMI Foundation’s Jerry Bock Award, which is given bi-annually to a composer/lyricist team from the BMI Musical Theatre Workshop.

Ben Brantley of The New York Times wrote that The Apple Tree “is somewhere you should definitely spend time if you need reassurance that musicals can still float next door to heaven,” and praised Bock and Harnick’s “remarkably fresh comic and musical stylings, which speak slyly in an assortment of musical tongues.”

Terry Teachout declared, “musical comedy fans, rejoice!” and Broadway.com wrote, “With a lovely score and witty book by the legendary Jerry Bock and Sheldon Harnick, ‘The Apple Tree’ is a must-see revival for lovers of musical theater.”

Avenue Q
2004 Best Musical and Best Score Tony Award by Robert Lopez and Jeff Marx, who met and first wrote together in the BMI Musical Theatre Workshop; plays nightly at New York’s Golden Theatre and in London at the Noel Coward Theatre.

Beauty and the Beast
Now in its 12th year at the Lunt-Fontanne Theatre, has music by Alan Menken, who also honed his craft at BMI’s Musical Theatre Workshop; he is currently a member of the Workshop’s Steering Committee. Menken’s Sister Act is currently breaking box office records on its pre-Broadway tour, and his Little Mermaid is in preparation for Broadway next season.

Chicago
1997 Tony Award for Best Musical Revival, by John Kander and Fred Ebb, celebrates its tenth year at the Ambassador Theatre. Kander and Ebb’s Curtains opens on Broadway March 22 at the Hirschfeld Theatre.

The Lion King
Music by Sir Elton John (PRS) and lyrics by Tim Rice (PRS), winner of the 1998 Best Musical Tony, is in its ninth year at Broadway’s Minskoff Theatre.

Mama Mia!
With songs by Benny Andersson and Björn Ulvaeus of ABBA, Mama Mia! has been playing at the Winter Garden Theatre since 2001.

The Producers
Won an unprecedented 12 Tony Awards including Best Musical and Best Score for Mel Brooks‘ music and lyrics, plays at the St. James Theatre.

Tarzan, The Lion King, Mary Poppins and Beauty and the Beast are all Disney Broadway productions.