Posted in MusicWorld on February 21, 2019 by Jason Blume 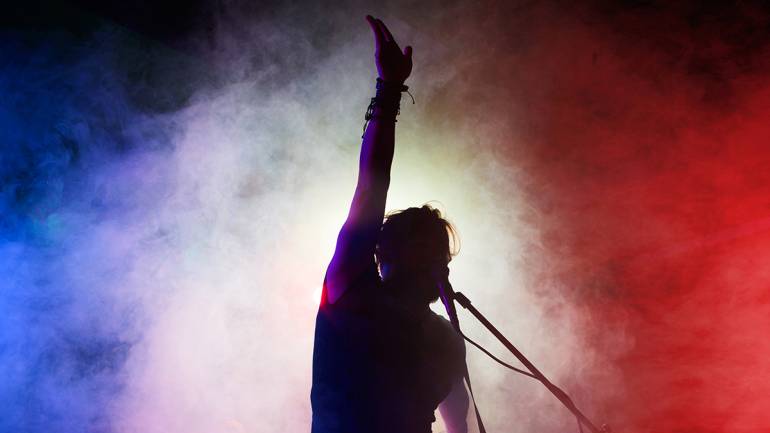 Although it was more than sixteen years ago, I still recall chatting with a twenty-something guy who stood in front of me in line as we waited to attend the taping of the David Letterman Show. The guy was excited because his brother Adam would be performing on the show, along with the band he fronted. It would be their first major television performance as they ramped up for the release of their debut single.

Before the band was halfway through performing their song, its insistent rhythms in the vocal melody, fresh groove, and unique sound told me I was hearing something very special. The song was “Harder to Breathe” (written by Jesse Carmichael, Ryan Dusick, Adam Levine, Michael Madden, and James Valentine) and it introduced the world to Maroon 5, but it almost never came to be.

In an interview with MTV News, Maroon 5 frontman Adam Levine shared that when the band initially delivered their debut album, Songs About Jane, to their record label, their A & R executive sent them back to the drawing board, saying they had not yet written a strong lead single. The song they returned with, “Harder to Breathe,” expressed the band’s frustration at being pressured to write a song that was even stronger than the others on an album that ultimately produced five chart singles. It became, not only their first single, but one of their signature songs.

With the costs of launching a new major-label artist running in the ballpark of a million dollars, it is understandable that the labels want to be confident that they have a first single that will break through and rise above the competition. I sometimes suggest that my songwriting students study breakthrough songs — songs that catapulted artists from unknown to superstar, and signature songs — songs that propelled an established artist’s career to its next level and became indelibly associated with that artist. These are songs that pushed the creative envelope — and they are typically packed full of tools and techniques that we can apply to our own writing. Let’s look at some of the elements in songs that have propelled artists from obscurity to stardom.

Nothing defines an artist like the songs they sing. If you are an artist, writing songs you intend to record, it’s important to identify the persona you hope to project. Are you strong? Wild? Irreverent? Street-wise? Sexy? Arrogant? Humble? Your songs—especially those that introduce you—need to reflect your identity. Similarly, if you are collaborating with an artist for his or her project, the songs you write need to reflect the way the artist hopes to be perceived by their audience.

The lyrics of breakthrough and signature songs have the important job of telling the audience who the artist is. When Tina Turner belted out “Proud Mary” (recorded by Ike and Tina Turner and written by John Fogerty) she did so with a totally different kind of magnetism than she did thirteen years later when she recorded “What’s Love Got to Do With it” (written by Terry Britten and Graham Lyle). WLGTDWI introduced the world to a new Tina, one who had broken free from her past and risen above it like a phoenix—strong, powerful, indestructible. The song was Turner’s declaration of independence. It launched her solo career, became her only #1 single, earned multiple GRAMMYs, and propelled the singer to iconic status.

It’s hard to imagine a more perfect marriage of artist and song than Aretha Franklin and “Respect” (written by Otis Redding). Although it was not the first of Franklin’s 112 chart singles, it became her signature song. In addition to providing the Queen of Soul a melody she could wail on, the lyric became a feminist and civil rights anthem, and a vehicle for her to cement her identity as a strong, powerful woman who would accept nothing less than R-E-S-P-E-C-T.

Most audiences first became aware of P!nk when her party anthem “Get The Party Started” (written by Linda Perry) became an international hit. The lyric, combined with the track and melody, presented the artist as confident and edgy.

The distinctive lyric concept of Maren Morris’ debut single, “My Church,” (written by Morris and Busbee) played a major role in bringing Morris to the attention of the public. In this soulful, gospel-infused anthem, Morris states that listening to country music while driving down a highway is her “church.” The song established her as an artist with a unique perspective—someone who was unafraid to push the boundaries of country music. It earned her a GRAMMY nomination for Best Country Song as well as a GRAMMY award for Best Country Solo Performance.

Macklemore and Ryan Lewis’ international #1 song, “Same Love,” featuring Mary Lambert shared a message of tolerance and acceptance of same-sex love and brought the artists to the public eye. The powerful message of this Song of the Year GRAMMY nominee was groundbreaking in the hip-hop genre, and while it was not their first hit, it brought the hip-hop duo to a next level of commercial and critical acclaim.

Another compelling example of a song that expresses the artist’s identity is Janis Ian’s Song of the Year GRAMMY nominee, “At Seventeen.” The self-penned, autobiographical song introduced audiences to Ian’s emotion-packed vocals and the rare vulnerability in her songwriting

A good case can be made for fresh, hooky, memorable melody being the most important component, not only in breakthrough and signature songs, but in all hit songs. But songs that introduce an artist—and songs that propel an artist to a next level— tend to have exceptional melodies that typically showcase the most identifiable aspects of the vocalist’s artistry. For example, the ultra-catchy melody and rhythms of “Pon De Replay” (written by Alisha Brooks, Vada Nobles, Evan Rogers, and Carl Sturken) were a perfect vehicle to introduce listeners to Rihanna’s sultry low tones. Barry White’s self-penned disco classic, “Can’t Get Enough of Your Love, Babe” showcased the artist’s signature, sexy, low notes. Similarly, singers with exceptional high notes or other distinguishing aspects of their vocals typically use their breakthrough songs as a means to share what is unique about them as vocalists.

“Smells Like Teen Spirit” (recorded by Nirvana and written by Krist Novoselic, Dave Grohl, and Kurt Cobain) was the lead single from Nevermind, Nirvana’s major label debut. With lyrics that were difficult to decipher—and even harder to assign a meaning to—it’s easy to surmise that it was the song’s unforgettable chorus melody coupled with Kurt Cobain’s impassioned vocals that not only established Nirvana as superstars, but ushered grunge into the mainstream.

Studying breakthrough songs is like a master class in songwriting. Listen to these songs that launched the artists with which they are forever associated: “She’s in Love With the Boy” (recorded by Trisha Yearwood, written by John Ims and “Saving All My Love for You,” Whitney Houston’s first #1 single (written by Gerry Goffin and Michael Masser).

Behind every recording artist’s breakthrough there is a song that established the sound and persona that audiences associate with that artist.

Melody, lyrics, vocals, rhythm, production, instrumentation, the backing track, a video, instrumental hooks, and additional elements all contribute to a song’s success. Some breakthrough and signature songs rely more heavily on some of these elements, while other seminal songs rely more on others. But the common denominators among songs that bring an artist to the forefront are that they sound like nothing that preceded them on the radio, and they showcase the magic that can result from the perfect prosody of artist and song.