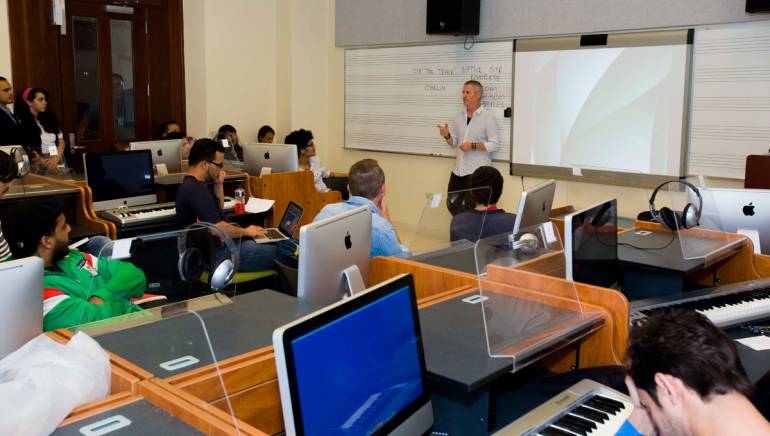 Fourteen students from the conservatory were carefully selected to participate in this one-of-a-kind master class, which stemmed from BMI’s commitment to nurture the talent and creative dedication of the conservatory’s Film/TV students. San Juan, Puerto Rico is also home to one of BMI’s six offices.

“I went to Puerto Rico expecting to enjoy the end of summer with a piña colada on the beach and maybe teach a few students how to put music to film,” says Neely, reflecting on the experience. “What I found was an incredibly beautiful and unique campus, state-of-the-art facilities, an amazing faculty of educators, and very talented students who were eager to learn about what I sometimes take for granted: the magic of Hollywood filmmaking. Their enthusiasm and appreciation re-opened my eyes to the good fortune I have to be able to make music for a living and also to help others achieve their dreams through teaching the craft. The Conservatory of Puerto Rico was a transformative experience for me.”

The two-day curriculum covered an extensive number of topics, including career aspirations, musical background and interests, sound design and working with different technology. Neely also offered tips on scoring to scene, using temp music tracks and writing templates, managing budgets, live scoring and breaking into the business, among other topics.

On day one, Neely presented students with a silent video clip of the CBS show, The Mentalist (Warner Brothers/Primrose Hill Production). The assignment was to score the clip and deliver it on day two of the master class. Neely was on hand to advise the students and help them incorporate the final touches to their respective scores. Upon completion of the assignment, students presented their scores and shared what they learned from the exercise. They also discussed challenges, as well as how to handle positive and negative feedback. Neely then unveiled his own original score for the same video clip, which further opened up the room for conversation.

Prior to the conclusion of the master class, students met with members of the film community in Puerto Rico. As part of the finale, the fourteen students voted for the top two scores, which went to René Boscio and Chris De León.

“Those two days have probably been the most meaningful I’ve had since I decided I wanted to do film music for a living,” said Boscio, 24, who graduated from the conservatory last year. “To have someone as important as Blake Neely, who’s worked with most of my favorite composers in Hollywood, teaching me about the art and craft of film scoring is something I will never forget.”

Neely was so impressed with Boscio’s work that he invited him to come to Los Angeles for a one-week internship, all expenses paid. To read about Boscio’s experience under Neely’s tutelage in LA, check out his weeklong blog on BMI’s Tumblr page.