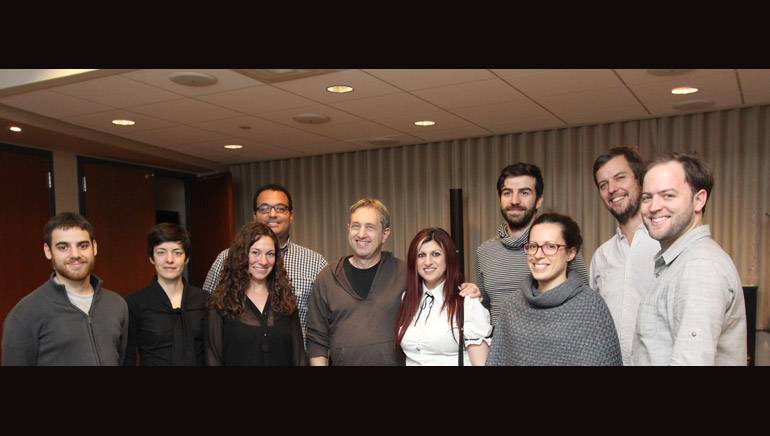 As part of championing composers’ career development and highlighting the art and importance of writing music for film, Broadcast Music, Inc. continued its support of the 2014 “Composing for the Screen,” a film scoring mentorship program directed by renowned BMI composer Rick Baitz. This New York City-based program provided the opportunity for nine emerging composers to participate in a high-level workshop where film music was examined from historical, psychological, dramatic and stylistic perspectives within an intensive six-week curriculum.

Hosted in the BMI NY office, participants explored the writing process by composing, recording and sharing work in a supportive environment. BMI composer George S. Clinton also graciously provided his expert feedback with the group, as he reviewed students’ rescored cues based on Clinton’s own score for Bury My Heart at Wounded Knee. He also discussed how he had the advantage of collaborating with the director by identifying cues which allowed him to address the moments that the film’s director wished to emphasize. While the students sometimes took a different approach, Clinton said that he was amazed at the diversity and psychological range they expressed. Clinton also imparted a time-saving tip: he typically composes a “suite” of themes that captures the undercurrent and intent of the film and presents those to the director before composing an actual cue.

On the final day of the workshop, BMI Director, Film/TV Relations, Anne Cecere, flew in from Los Angeles to speak to the students about the business side of writing music for film, TV and video games, adding insights on navigating the industry.

Students completed the workshop and emerged with greater confidence as film composers, with several strong cues for their reel, an increased understanding of the business of film music and greater sensitivity to the art of composing for the screen. During the year following the workshop, the group will also meet on occasion to share work and discuss students’ development as film composers.