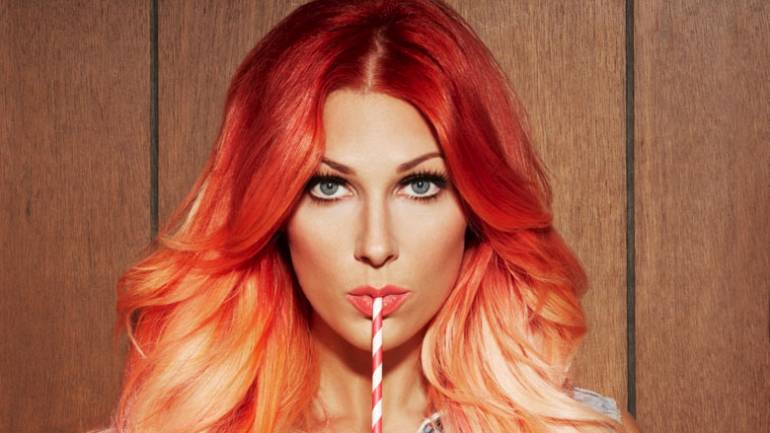 If you’ve been listening to Top 40 radio for the past few years, then you definitely know Bonnie McKee, even if her face is still relatively new. But that’s all about to change this summer, as the 29-year-old singer-songwriter, whom Rolling Stone named “Best Secret Weapon” in 2011, becomes as ubiquitous as the pop superstars with whom she’s collaborated via her own hit single, “American Girl,” available on iTunes on July 23. With eight No. 1 singles on her songwriting resume, including Katy Perry’s “Teenage Dream” and “California Girls,” Britney Spears’ “Hold It Against Me,” and Taio Cruz’s “Dynamite,” the self-described “pop star in training” is more than equipped to make her own mark in music. Just like the pop icons she grew up listening to in the ‘80s, McKee’s songs have powerhouse vocals, big choruses and bright, colorful imagery that render them irresistible. “Some of my earliest memories are of watching Madonna, Michael Jackson and Cyndi Lauper on MTV,” says McKee over the phone in New York City, where she’s on a press and promo tour. “I loved how the artists of that era were so visual. Seeing what they could do really modeled me as a musician. Every day I ask myself, ‘What would Prince do?’”

But her love for pop music as a child was more than just a passing fad. In fact, McKee can pinpoint the exact moment when she decided to become a classically trained musician. “I remember when I was a little kid watching a Tina Turner HBO special and when she played ‘Proud Mary’ I literally jumped out of my seat and was crying out of excitement,” recalls McKee, who was born in Vacaville, California, and raised in Seattle. “I just remember thinking, ‘I want to make people feel like this.’ That was the first time that I had that kind of transcendental experience.” Convinced this was her calling, McKee studied piano and joined the Seattle Girls Choir, with whom she toured North America and Europe, even performing at the Vatican. At age 12, McKee’s mom handed a demo of her daughter singing Bette Midler and Fiona Apple to a friend, Sub-Pop label co-founder Jonathan Poneman, whose words left an impression on the aspiring artist. “That’s great that you can sing, but anyone can sing,” Poneman told her. “Can you write?” For the next few years, McKee focused on her lyrical craft and started making waves in the local Seattle scene with the ballad “Somebody.”  At age 16, she was signed to Reprise Records. A solid debut album, Trouble, was cut with renowned producer Rob Cavallo and released in 2004. But when her singles didn’t garner overnight success, the label released McKee from her contract. “I was thrown to the wolves after being the darling at the label,” says McKee, whose struggles in the music industry are similar to those her friend and frequent collaborator Katy Perry faced in the beginning of her career.  “I think that if you haven’t struggled then you don’t appreciate it as much,” adds McKee, looking back on those early years. “The first time around I kind of won the lottery and got a deal out of nowhere that just fell out of the clear blue sky. I was like, ‘Oh, that was easy!’ [laughs]. And then the next time around, I realized how hard you have to work and I just am so grateful and so humbled. It’s important to know the process and realize how hard you really have to work to get where you wanna go.”

It was in 2009 that things finally turned around for McKee, when she was introduced to hit songwriter-producer Dr. Luke and started writing songs with him and Max Martin. The trio churned out hit after hit, including Katy Perry’s five Billboard Hot 100 chart-toppers: “California Gurls,” “Teenage Dream,” “Last Friday Night (T.G.I.F.),” “Part of Me” and “Wide Awake.” Hearing her work on the radio for the first time was an unforgettable experience, says McKee. “The first hit I wrote was ‘California Gurls’ and I’ll never forget, I was in my car, driving to the studio and the song came on,” recalls McKee. “ I remember I got out of my car and I was like, ‘Oh my God! This is me!’ My first time around in the industry, everything just moved like icebergs and nothing ever came out and you’d write a song and three years later, maybe you hear it and you maybe don’t. So to have written it a few months before and then actually hear it on the radio was so delightful.” Still, the song closest to McKee’s heart is Perry’s “Teenage Dream,” because coming of age in a great, big world is a theme she’s always loved exploring in her music. You can hear it on “Confessions of a Teenage Girl,” off her first album, all the way through to this year’s “American Girl,” where she sings: “I fell in love in a 7-Eleven parking lot / sat on the curb drinking Slurpees we mixed with alcohol / we talked about all our dreams and how we would show ‘em all…” “It’s been kind of an ongoing thing,” says McKee of her favorite theme, “so writing ‘Teenage Dream’ was very dear to my heart, because I finally got to use that concept and have it work.”

It was only a matter of time before another record label scooped McKee up, and in 2012, recognizing her songwriting abilities as well as her vocal prowess, L.A. Reid signed her to Epic Records. Now McKee is hard at work with a team of talented musicians (including Oliver Goldstein, Josh Abraham, Greg Kurstin, Dr. Luke and Max Martin) to put the finishing touches on her sophomore album. Due to the success of McKee’s lead single, “American Girl,” the plans to launch the album in 2014 might get pushed up to this year, according to McKee. One look at the song’s viral video on YouTube - which features KISS, Ke$ha, Katy Perry, Taio Cruz, Jason Derulo, Joan Rivers, Tommy Lee, Macklemore and other celebrities singing along to McKee’s summer banger - and it’s clear she has the respect of her peers. “It’s so amazing,” says McKee of her friends’ cameos in the viral video (another formal music video will follow on July 29). “I really wasn’t expecting what I got back. I just kind of cast out a net and was hoping to catch something. I was expecting people to send me little iPhone videos, and some people did, but I was really surprised and moved by how all out people went.” But it’s not just her famous friends who love her - with 93,000 followers on Twitter and counting, McKee is also gaining new fans by the minute.

In many ways, McKee could not have picked a better time to break out on the scene. Never have the lines been more blurred between genres and that’s what she says most excites her about pop music today. “When I was growing up, it was like, you’re either a rocker or you’re a hip-hopper or you like ‘N Sync, and there’s no in between. So I think it’s nice that now people have iPods, and the more diverse your playlist is, the more exciting it is.” As for what to expect on her debut album, McKee teases: “I’m pulling a lot from the stuff that I was listening to as a kid, early Madonna and Prince, that kind of stuff. There’s a lot of throwback sounds and then there’s a lot of modern new pop music sounds. And because it took me several years to write, it covers a vast scope of emotions, everything from failing to breaking hearts to partying to persevering. So it’s kind of like a deep album disguised as a pop explosion.” In other words, it’s a winning formula.