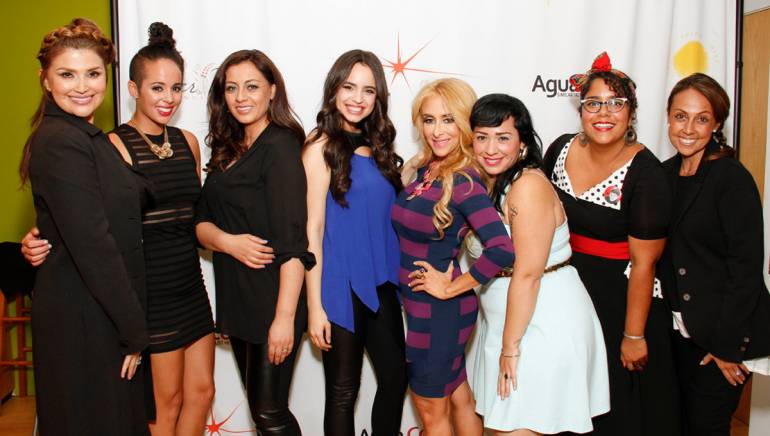 The Broadcast Music, Inc. event Noche Bohemia, benefiting the Mujer de Fé Foundation, brought together members of the Latin music community on September 24 in support of a great cause. The intimate showcase, featuring Latin GRAMMY-winning singer-songwriters Paulina Aguirre and Carla Morrison, and the talented Raquel Sofia, La Santa Cecilia and Sofia Carson, took place at Bokaos Aveda in the historic Old Town section of Pasadena, Calif. Run by celebrity hairstylist and beauty expert Hasblady Guzman, the spacious, three-tiered salon provided the perfect backdrop for a night of heartfelt reflection and acoustic performances by some of the most exciting female voices in Latin music. In between performances, Bokaos stylists offered massages and makeovers to BMI’s guests.

Halfway through the Noche Bohemia event, the organization’s founder Paulina Aguirre shared a video about Mujer de Fé’s mission, which is to empower women dealing with issues such as anxiety, depression and abuse by assisting in their intellectual and spiritual development and providing them with the necessary tools for personal and professional progress. The video drove home the fact that these issues affect women at alarming rates.

“Music can be more powerful than politics,” said the Ecuadorian singer-songwriter and philanthropist, before thanking everyone for attending. “This is our first fundraising event and it’s not about how much we raise; it’s about the heart of what we do.” Aguirre went on to thank the women who are active members of the organization, including Delia Orjuela, BMI Vice President, Latin Writer/Publisher Relations and Bokaos’ Hasblady Guzman.

Learn more about Mujer De Fé and how to contribute to their mission.