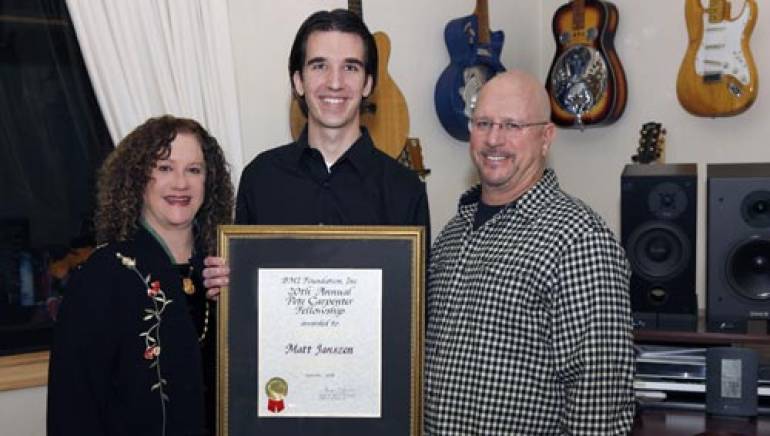 The BMI Foundation has named Matthew Janszen the winner of the 21st annual Pete Carpenter Fellowship for aspiring film composers under the age of 35. The Fellowship was established by the BMI Foundation and Mr. Carpenter’s family, colleagues, and friends to honor the late co-composer of television themes and scores for classics including The A-Team, Magnum P.I. , The Rockford Files, Hardcastle and McCormick, Hunter and Riptide.

Janszen will have the opportunity to work for 4 to 5 weeks with BMI composer Mike Post, Pete Carpenter’s partner, friend and writer of such TV themes as NYPD Blue, Hill Street Blues, L.A. Law and Law and Order. Janszen will also receive a $3,000 stipend for travel and expenses and will have an opportunity to meet with other distinguished theatre, film, and television composers.

Originally from Cincinnati and currently residing in Los Angeles, Janszen started composing music while receiving his bachelor’s degree in acoustical engineering from Purdue University. He proceeded to receive his master’s degree in sound design from the University of Missouri - Kansas City, where he composed music for numerous theatre productions and short films. In 2007, Matthew started his own music company, Pure Slate Music, LLC, to publish and distribute his concert works as well as provide arrangements for professional orchestras and university marching bands nationwide. Matthew has also composed for television commercials promoting products including Sunny D and corporate videos for companies such as US Bank. Matthew has been awarded by Purdue University, the Henry Mancini Institute, the Prague Quadrennial, and in 2007, was named one of the top ten young film composers in the nation by Turner Classic Movies.