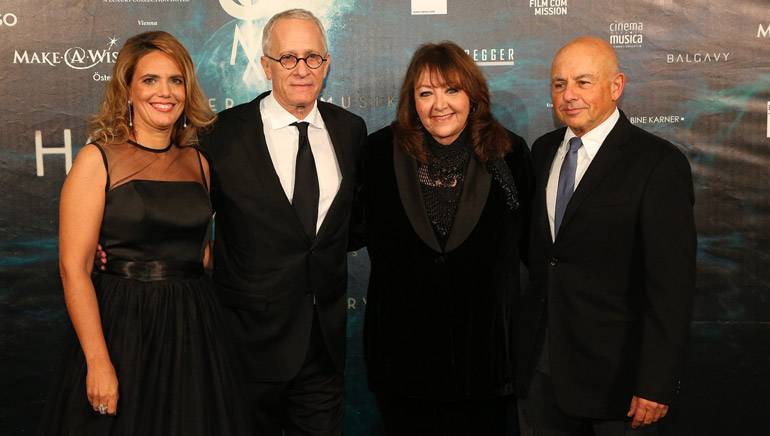 On Oct 16, 2015, BMI composer James Newton Howard was celebrated with a long-standing ovation by a cheering Viennese crowd while receiving the “Max Steiner Film Music Achievement Award.” In addition to the enthusiastic audience, director M. Night Shyamalan and composer Hans Zimmer both sent personal greetings to the Vienna Concert Hall that were delivered to an emotional Howard on stage by Hollywood in Vienna founder, Sandra Tomek. Hans Zimmer graciously expressed his admiration for his colleague and for his music, and Shyamalan exclaimed how Howard brings so much talent to his films.

The award is meant to be a symbol of recognition for exceptional achievements in the art of film music, by the City of Vienna. In his acceptance speech, James Newton Howard thanked Hollywood in Vienna and the City of Vienna, the music capital of the world and a place he’s always dreamed of, for this distinct and meaningful honor.

After a beautiful tribute conducted by Keith Lockhart of the Boston Pops Orchestra and performed by the prestigious ORF Radio Symphony Orchestra, the award was presented to Howard by Norbert Kettner, Managing Director of the Vienna Tourism Board. Included in the concert were world premieres of several of James Newton Howard’s pieces performed live: “The Hanging Tree” from The Hunger Games: Mockingjay - Part 1, which touched the composer and brought him not only to tears but also up on his feet for a standing ovation, and selections from Maleficent and Blood Diamond. The first part of the concert titled, “Tales of Mystery,” took the more than 1,800 audience members on a journey to the unknown. Stunning visuals, a hauntingly beautiful lighting design and gripping musical performances, including “Signs,” “The Addams Family” and Alfred Hitchcock’s “Rebecca,” transported the attendees into the twilight zone.

Three different choirs and an array of soloists, led by 16-time GRAMMY nominee Brian McKnight also made the Film Music Gala an unforgettable event. The guests, including composer Richard Bellis (“IT”) and the U.S. Ambassador to Austria, Alexa Wesner, joined in to give thundering applause to the talent and producers of the show.