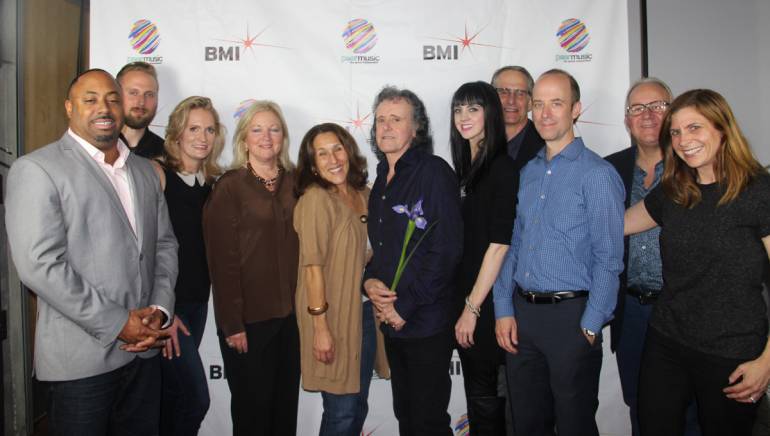 Broadcast Music, Inc. proudly co-sponsored peermusic’s “Peer Bliss” mixer to support Rock ‘n’ Roll Hall of Famer and BMI Icon Donovan, who treated the industry crowd to an intimate performance at peermusic’s Burbank, Calif., office on October 22, 2014. A multifaceted talent renowned for his stylistic range, Donovan started his career at peermusic’s London studios and transformed the music scene in the ’60s from folk to psychedelic to pop and back again. While early songs like “Catch The Wind” and “Colours” sparked his popularity, Donovan’s work from 1966–1969 cemented his success and scored 11 Top 40 hits in a row, featuring many favorites including “Mellow Yellow,” “Sunshine Superman” and “Hurdy Gurdy Man.”

His unique fusion of folk, blues and jazz has had an influence on many of the greatest recording artists of all time. Donovan has also been successful in film and television, with major placements in shows such as American Horror Story: Coven, Arrested Development, Family Guy and Nip/Tuck. His work also appears in several films, including Dark Shadows, Old School and Goodfellas, where filmmaker Martin Scorsese famously juxtaposed Donovan’s mellow “Atlantis” with a brutal scene — a creative gamble that paid off critically and commercially. His songs were also featured in previews for Rumor Has It, Zodiac and The Conjuring, which won the Golden Trailer Award for Best Horror trailer.

BMI and peermusic share a unique and storied history. Started by industry pioneer, Ralph Peer, in the late ’20s as Southern Music Publishing Co., Inc., the music publisher embraced previously underrepresented genres, such as hillbilly (now country), folk and Latin music. These new sounds excited listeners, and as peermusic acquired songs that eventually became standards, such as “Georgia On My Mind” and “Will the Circle be Unbroken,” the visionary company came to define the era’s musical trends. By the ’40s,  peermusic’s catalog contained a diverse range of talents and had effectively revolutionized the music industry. This business philosophy perfectly dovetailed with BMI’s open-door policy, as both organizations championed songwriters of R&B, country and Latin music. BMI and peermusic forged a partnership on the fringes of popular music, and this inclusive, creative collaboration continues to be successful today.