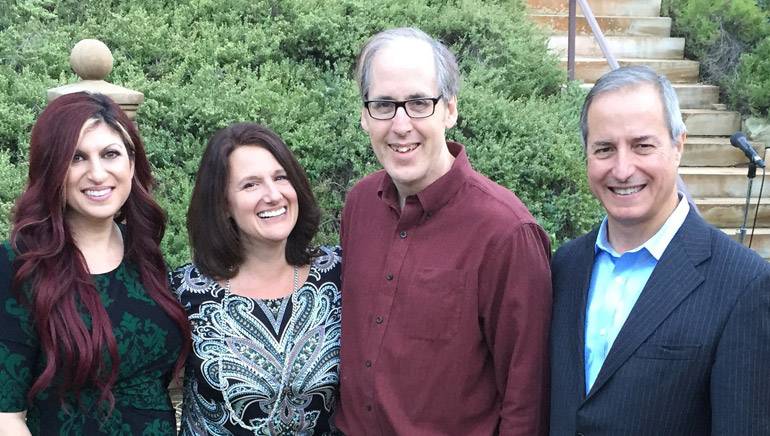 Fifteen-time nominated and four-time Emmy winner, most recently for his score of the immensely popular Netflix series House of Cards, composer Jeff Beal and his wife, esteemed vocalist Joan Beal, have generously committed to financing the Beal Institute for Film Music and Contemporary Media at the University of Rochester’s Eastman School of Music, the couple’s alma mater. The new institute will provide students with instruction and experiences that prepare them for the increasing and evolving opportunities to write, produce, and perform music for film and contemporary media.

Supporting this hugely momentous endeavor, BMI’s Director of Film/TV Relations, Anne Cecere, attended the private reception for the launching of the institute that included a conversation with Eastman Dean Jamal Rossi, Jeff and Joan Beal and other noted alumni. Jeff Beal, who studied composition and trumpet at Eastman, received his Bachelor of Music degree with High Distinction in 1985. One of the most prolific and respected composers for film, media, and the concert hall, for which his commissioned works have been performed by many leading ensembles, Beal will serve as artistic director of the institute and continue to be actively involved with the school, its students, and administration.

“This generous gift from Jeff and Joan connects the film legacy of the School’s founder, George Eastman, to a new era of opportunities in the music world,” said University of Rochester President and CEO Joel Seligman. “We are grateful for Jeff’s and Joan’s vision and support to enhance the Eastman School of Music’s preeminent role in preparing students to build lifelong careers.”

Having received her Bachelor of Music degree from Eastman in 1984, Joan Beal has sung on more than 100 film scores for composers including John Williams, James Newton Howard, and James Horner, and has done numerous national commercials and television series. She also serves as a vocal contractor and choral conductor for composers, selecting and coaching singers to enhance musical scores. Her collaborations with Jeff include vocals for the HBO series Carnivàle and Rome, and most recently, the operatic vocals on House of Cards.