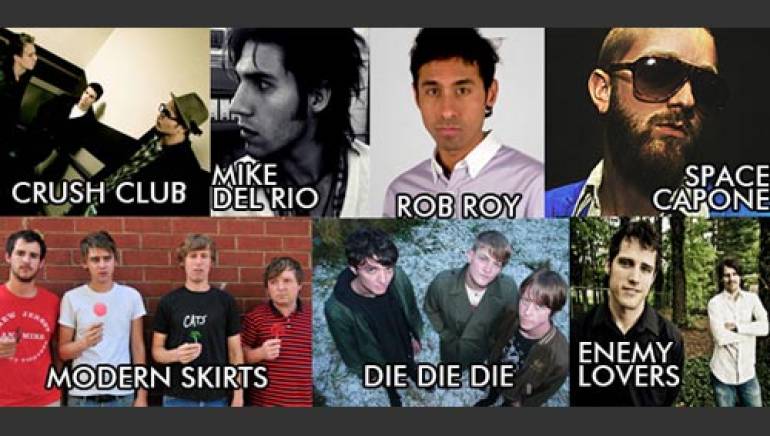 BMI has announced the performers at the 2009 BMI-sponsored CMJ Music Marathon Festival showcase on Wednesday, October 21 at 7:30 p.m. A diverse lineup of talent will hit the stage at Crash Mansion (199 Bowery, NYC), continuing CMJ’s 29-year history of celebrating new music first. Entry is free for CMJ badge holders. The cost for non-registered CMJ attendees is $5 before 11 and $10 after; free drinks will be available from 7:30 - 8:30 p.m.

8:45 p.m. - Space Capone: Funky horns and a tight rhythm section make up Space Capone, scholars of funk, jazz and r&b. Still riding high off their debut album, Volume 1: Transformation, Space Capone is a band that respects their influences but knows how to party at the same time.
myspace.com/spacecapone

9:30 p.m. – The Enemy Lovers: Brothers Tim and Steven Scroggs, who make up The Enemy Lovers, recently completed their debut release in Atlanta with producer Dan Hannon. Their creative combination of multiple musical styles centers around the vocals performed by both brothers, led by younger brother Tim.
myspace.com/theenemylovers

10:15 p.m. – Modern Skirts: Hailing from Athens, GA, rock outfit Modern Skirts released All Of Us in Our Night to critical acclaim in January 2009. The bands second full-length CD reached #20 on the CMJ charts in February 2009 and was the only self-released album in the top 20. After receiving rave reviews and touring Europe twice, Modern Skirts are gearing up for the release of their next compilation in 2010.
myspace.com/modernskirts

11:00 p.m. – Mike Del Rio: Billboard hailed Mike Del Rio in 2007 as one of the Top Unsigned Talents in the industry in the wake of his independent release Blooming Under Pressure. 22-year-old Rio is currently working with Adam Pallin in the creation of his full-length album.
myspace.com/mikedelrio

12:30 p.m. – Die Die Die: New Zealand’s finest avant-garde punk band Die! Die! Die! are one of the unsung breakthrough bands of this year. Their songs are mountains of noise forced into song-shaped outbursts of melody and screeching vocals, all the while teasing and seducing. They’re the kind of band that people don’t see coming until they’re a bloody mess on the dancefloor; shaken and bruised, or nervously, mischievously smoking in the corner of the room.
myspace.com/diediedienz