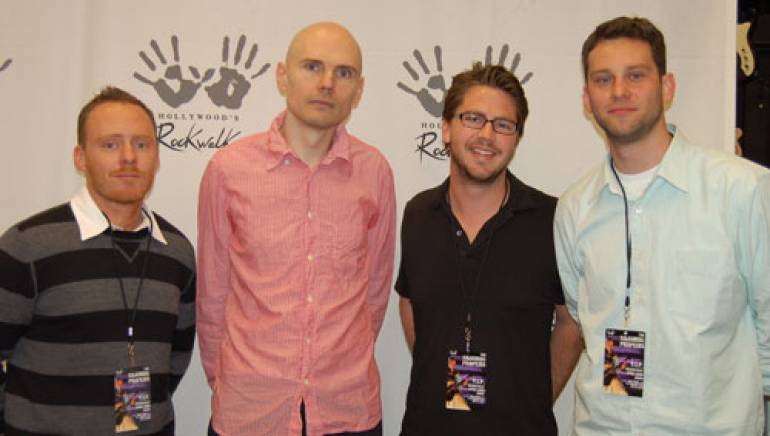 Shown at the reception are (l to r): BMI's Myles Lewis and Smashing Pumpkins' Billy Corgan, with BMI's Joe Maggini and Casey Robison.

BMI celebrated the return of one of the most popular rock bands of the 90s, Smashing Pumpkins, by congratulating original members Billy Corgan and Jimmy Chamberlin as they were inducted into Hollywood’s RockWalk. Held at the Guitar Center on April 23, the ceremony honored the multi-platinum and multi-Grammy award nominees of the Chicago band, who enjoyed such modern-rock hits as “Today” and “1979.”

Founded in 1985, Hollywood’s RockWalk on Sunset Boulevard is the only sidewalk gallery dedicated to honoring those artists who have made a significant impact and lasting contribution to the growth and evolution of rock and roll, blues and r&b. Their handprints and signatures will reside alongside other equally accomplished musicians and innovators including Isaac Hayes, Holland-Dozier-Holland, Eric Clapton, Carlos Santana, Brian Wilson, Aerosmith, Herbie Hancock, Elvis Presley, Queen, the Black Crowes, Dick Clark, Willie Dixon, Buddy Guy, Jimi Hendrix, KISS, Les Paul, John Lee Hooker, Smokey Robinson and others.