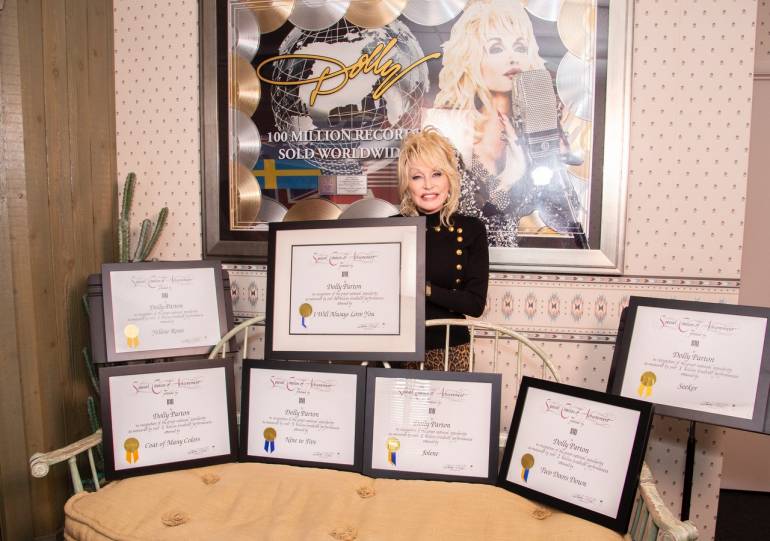 The incomparable Dolly Parton has once again surpassed milestones, literally millions of them, when BMI awarded her with several of their coveted “Million-Air” certificates, which recognize songs that have reached over one million broadcast performances. In a special presentation via Zoom, Mike O’Neill, BMI’s President and CEO, along with Billboard Magazine, awarded the multi-talented Parton certificates for seven of her iconic hits. Most notably, her mega hit “I Will Always Love You” logged a staggering ten million performances to date, ranking it in the top 30 of BMI’s most-performed songs of all time. Other songs awarded certificates included “Nine to Five (5 million performances), “Jolene” (2 million), and “Two Doors Down” (2 million). “Seeker,” “Yellow Roses,” and “Coat of Many Colors” all received certificates for the 1 million mark. Together, these 7 songs have over 22 million cumulative performances.

“Dolly’s career is extraordinary. She is, of course, an incredible performer, actor, philanthropist and businessperson, but for us, it all starts with her songwriting,” said O’Neill. “She tells stories in her songs like no one else can, transcending genres and connecting with her millions of fans. Dolly’s lyrics and music, authenticity, strength, and humor are all extraordinary gifts she has shared with the world.”

Dolly Parton has been part of the BMI family since 1962 and has been honored with 36 songwriting awards for some of the most played songs over several decades. In 2003, she was awarded the BMI Icon Award to mark her unique and indelible influence on generations of music makers. “I Will Always Love You” surpassing 10 million radio performances is a rare milestone and puts the blockbuster hit in the company of songs like “Yesterday” by Paul McCartney and John Lennon and “Satisfaction” by Keith Richards and Mick Jagger.