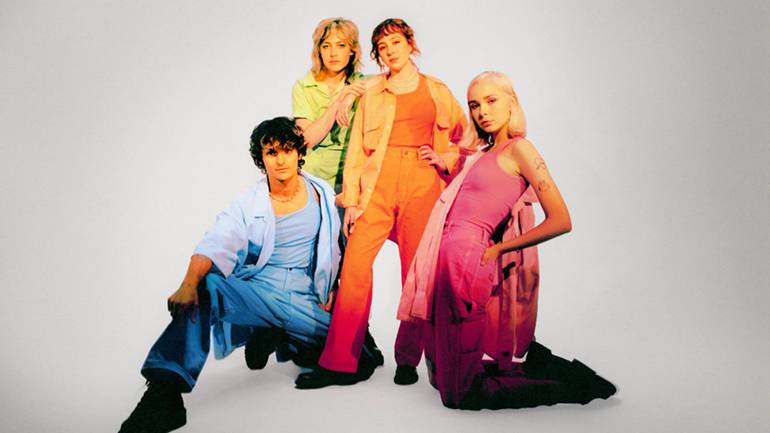 Despite their name, the LA-based Regrettes—made up of lead singer/songwriter Lydia Night, guitarist Genessa Gariano, bassist Brooke Dickson, and drummer Drew Thomsen—create music with such fierceness and authenticity that their vibe is anything but remorseful. Influenced by a diverse mix of artists (The Cure, Charli XCX and Gwen Stefani, to name a few), their brand of distorted but danceable grrrl-centered music blends styles like guitar-forward garage, pop-punk and new wave. Gariano and Night met as music school students, and their 2017 debut album, Feel Your Feelings Fool!, came out when they were still teenagers. By 2019, The Regrettes were headlining sold-out shows, playing at Coachella and Reading, performing on Good Morning America, and earning accolades from publications like NME, who called them “truly unstoppable.” Unfortunately, the pandemic did stop them, at least from touring, but they were encouraged to turn inward and ask themselves, as Night explains, “Who am I when I’m not performing?” The answer can be found on Further Joy, their latest release. Mental health is a prominent theme, and the title was inspired by the desire to break free of what Night calls “the chase for happiness.” Digging deep has led to their most mature and vulnerable work to date. Further Joy explores themes like anxiety, feelings of inadequacy and sexual self-acceptance on songs like “Monday,” which Rolling Stone called “an ebullient song examining the complexities and frustrations of insecurity.” The Regrettes are currently touring through North America and Europe, with dates planned for Lollapalooza in Chicago and the TRNSMT Festival in Glasgow.